Taiwan’s defence ministry said 51 Chinese aircraft and six Chinese ships had been detected operating around Taiwan on Thursday as Beijing continued military activities near the island.

That included 25 aircraft that crossed the Taiwan Strait’s median line, which in normal times acts as an unofficial barrier between the two sides, or flew into Taiwan’s air defence zone.

The sortie came after the U.S. government said it will hold trade talks with Taiwan in a sign of support for the island democracy that China claims as its own territory, prompting Beijing to warn it will take action to ‘safeguard its sovereignty.’

Earlier this month, Beijing fired missiles into the sea to intimidate Taiwan after U.S. House Speaker Nancy Pelosi became the highest-ranking American official to visit the island in 25 years. 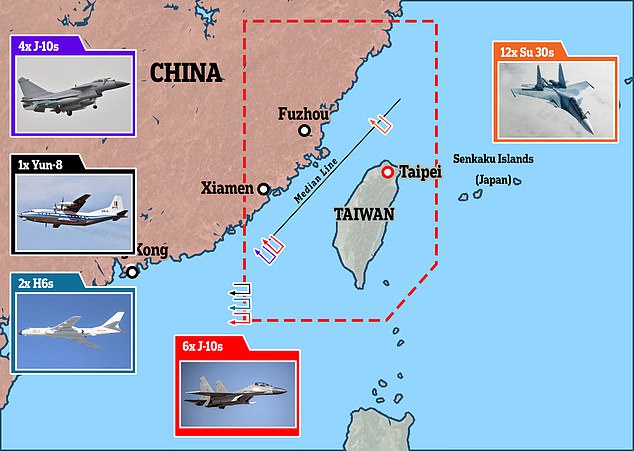 Pictured: A map showing where the Chinese aircraft entered the country’s the country’s Air Defence Identification Zone and crossed the median line

Chinese President Xi Jinping’s government criticized the planned talks as a violation of its stance that Taiwan has no right to foreign relations.

It warned Washington not to encourage the island to try to make its de facto independence permanent, a step Beijing says would lead to war.

Meanwhile, the US expects China to ramp up its military, diplomatic and economic ‘coercion’ of Taiwan, its top envoy in East Asia said on Thursday.

‘While our policy has not changed, what has changed is Beijing’s growing coercion,’ Kritenbrink, who is Washington’s top envoy for East Asian relations, told reporters on a teleconference call.

‘These actions are part of an intensified pressure campaign… to intimidate and coerce Taiwan and undermine its resilience,’ he added.

Washington believes the drive to press the island’s government will carry on in the coming ‘weeks and months.

Also Thursday, Taiwan’s military held a drill with missiles and cannons simulating a response to a Chinese missile attack. 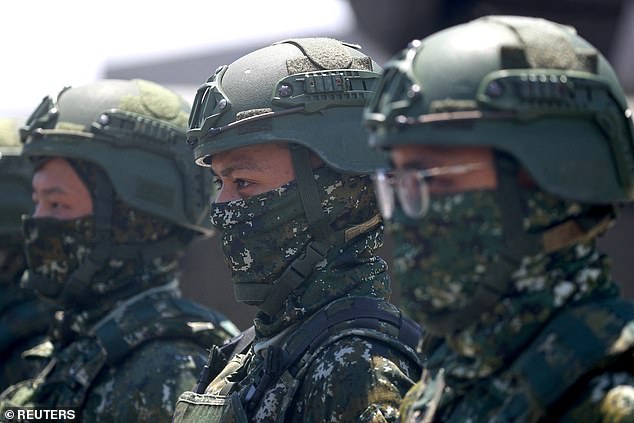 Soldiers stand guard at an airbase in Hualien, Taiwan, August 18, 2022 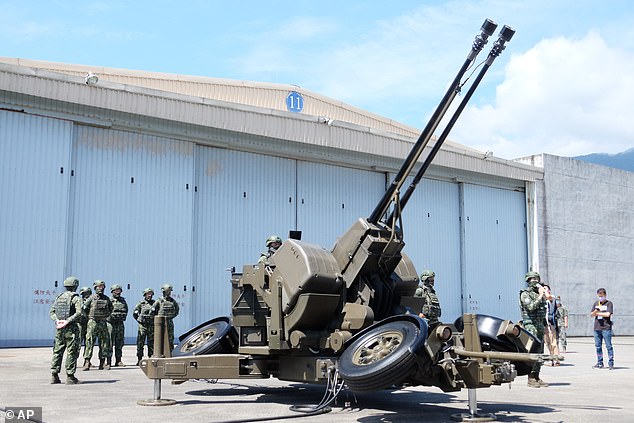 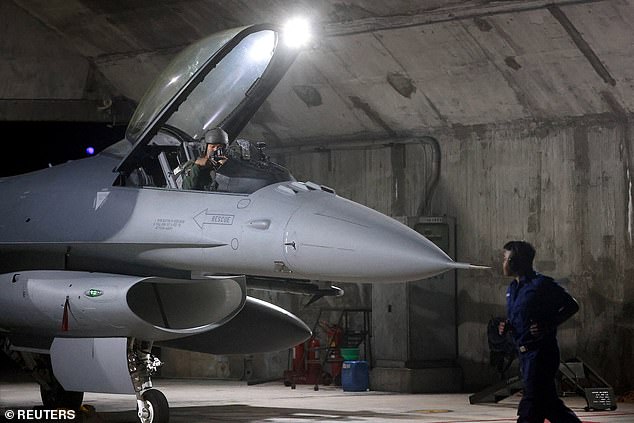 An Air Force soldier runs next to F-16V fighter jet as the pilot prepares for an evening take off as part of a combat readiness mission at the airbase in Hualien, Taiwan, August 17, 2022

Taiwan and China split in 1949 after a civil war and have no official relations but are bound by billions of dollars of trade and investment.

The island never has been part of the People’s Republic of China, but the ruling Communist Party says it is obliged to unite with the mainland, by force if necessary.

The U.S. Trade Representative’s announcement of the talks made no mention of tension with Beijing but said ‘formal negotiations’ would develop trade and regulatory ties, a step that would entail closer official interaction.

Being allowed to export more to the United States might help Taiwan blunt China’s efforts to use its status as the island’s biggest trading partner as political leverage.

The mainland blocked imports of Taiwanese citrus and other food in retaliation for Pelosi’s Aug. 2 visit.

Taiwan’s Foreign Ministry expressed ‘high welcome’ for the trade talks, which it said will lead to a ‘new page’ in relations with the United States.

U.S.-Chinese relations are at their lowest level in decades amid disputes over trade, security, technology, and Beijing’s treatment of Muslim minorities and Hong Kong. 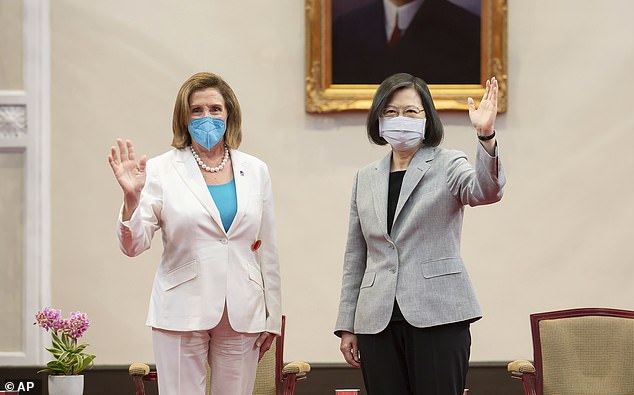 The U.S. Trade Representative said negotiations would be conducted under the auspices of Washington’s unofficial embassy, the American Institute in Taiwan.

‘China always opposes any form of official exchanges between any country and the Taiwan region of China,’ said Shu, the Chinese spokesperson. ‘China will take all necessary measures to resolutely safeguard its sovereignty.’

Washington says it takes no position on the status of China and Taiwan but wants their dispute settled peacefully. The U.S. government is obligated by federal law to see that the island has the means to defend itself.

‘We will continue to take calm and resolute steps to uphold peace and stability in the face of Beijing’s ongoing efforts to undermine it, and to support Taiwan,’ Campbell said during a conference call last Friday.

China takes more than twice as much of Taiwan’s exports as the United States, its No. 2 foreign market. Taiwan’s government says its companies have invested almost $200 billion in the mainland. Beijing says a 2020 census found some 158,000 Taiwanese entrepreneurs, professionals and others live on the mainland.

China’s ban on imports of citrus, fish and hundreds of other Taiwanese food products hurt rural areas seen as supporters of President Tsai Ing-wen, but those goods account for less than 0.5% of Taiwan’s exports to the mainland.

Beijing did nothing that might affect the flow of processor chips from Taiwan that are needed by Chinese factories that assemble the world’s smartphones and consumer electronics. The island is the world’s biggest chip supplier.

A second group of U.S. lawmakers led by Sen. Ed Markey, a Democrat from Massachusetts, arrived on Taiwan on Sunday and met with Tsai. Beijing announced a second round of military drills after their arrival.

Taiwan, with 23.6 million people, has launched its own military drills in response.

On Thursday, drills at Hualien Air Base on the east coast simulated a response to a Chinese missile attack. Military personnel practiced with Taiwanese-made Sky Bow 3 anti-aircraft missiles and 35mm anti-aircraft cannon but didn’t fire them.

‘We didn’t panic’ when China launched military drills, said air force Maj. Chen Teh-huan. ‘Our usual training is to be on call 24 hours a day to prepare for missile launches,’ Chen said. ‘We were ready.’

Washington and Beijing are locked in a 3-year-old tariff war over many of the same issues.

They include China’s support for government companies that dominate many of its industries and complaints that Beijing steals foreign technology and limits access to an array of fields in violation of its market-opening commitments.

Then-President Donald Trump raised tariffs on Chinese goods in 2019 in response to complaints that its technology development tactics violate its free-trade commitments and threaten U.S. industrial leadership. Biden has left most of those tariff hikes in place.