The fertile fields surrounding Tainan, the former capital of Taiwan famed for its fireflies, food and hundreds of historic temples, were filled for centuries with lush rice paddies and huge stretches of sugar cane.

But drive north from the city today, passing the National Museum of Taiwan History, and you find yourself surrounded by scores of drab, low-slung industrial blocks.

In place of rural serenity, there is the bustle of building sites. Clusters of young workers smoke and chat in the shade of trees while others scurry along the street under the fierce sun, clutching lunch grabbed from noodle stalls.

‘This was very different when I was growing up,’ said a local man in his 20s. ‘Now it is all engineers, scientists and new buildings.’

For Taiwan has discovered a lucrative new cash crop: the manufacture of cutting-edge computer chips, the tiny silicon semiconductors which are the building blocks of modern society from national defences through to electricity grids, health systems, stock trading, transport and mobile phones.

Already this fast-expanding science park on the south of the island produces the world’s most advanced chips, 10,000 times thinner than paper. Soon it will churn out the next generation that are even smaller, faster and more efficient.

But such is Taiwan’s market dominance, dramatically outpacing China and the United States, there are fears over the devastating global impact if the Chinese government ever carries out its threat to seize Taiwan, the thriving island democracy on its doorstep.

‘We all now depend on peace in the Taiwan Strait,’ said Chris Miller, a professor of economic history and author of Chip War, a book analysing the struggle for control of microchips, which he suggests are now humanity’s most critical industrial resource. ‘The cost of conflict between China and Taiwan could run into trillions for the world, with almost every company impacted amid delays of many years for goods on which our society relies. The shock could be greater even than the Covid pandemic.’ 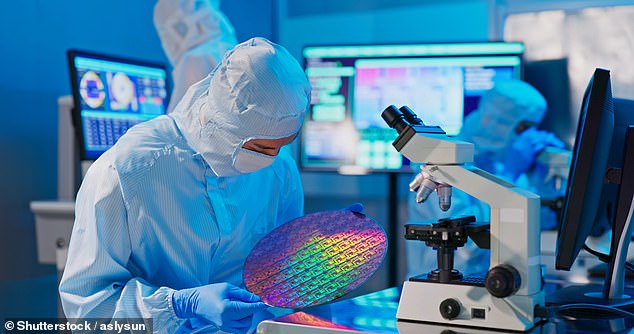 ‘We all now depend on peace in the Taiwan Strait,’ said Chris Miller, a professor of economic history and author of Chip War, a book analysing the struggle for control of microchips, which he suggests are now humanity’s most critical industrial resource

Miller sees microchips as ‘the new oil’ – a scarce resource of massive strategic significance that fuels military, economic and geopolitical power. A typical mobile phone contains 22 chips, while even a small diabetes monitor has four and a kitchen coffee maker three. Such is their importance that some experts fear the Beijing regime might be spurred into an attack on Taiwan simply to seize its foundries churning out chips.

China has a surprisingly poor record in this industry. It spent more than $100 billion (£84 billion) to develop its own semiconductors, only to discover recently that much of the money had disappeared through corruption. Its semiconductor industry is thought to be at least a decade behind Taiwan’s.

Yet, conversely, others suggest Taiwan’s $125 billion (£106 billion) chip industry might actually deter invasion as China’s firms and military are so dependent on it. It has been described as a ‘silicon shield’ and ‘huguo shenshan’ – ‘the magic mountain that protects the nation’.

‘If there is a war across the Taiwan Strait, there will be no winner,’ said Lee Hsi-Min, the country’s former military chief of staff. ‘Taiwan is so far ahead and we supply the world with the most advanced chip, so it is a kind of economic deterrence.’

Ominously, however, the admiral pointed out that the Ukraine war shows dictatorships do not always act logically. ‘Beijing may agree that it would be disastrous, but this might not be enough to stop them.’

Key to Taiwan’s chip dominance is a visionary tech entrepreneur in his 90s who reads Shakespeare before bed to gain wisdom about ‘the nobility, greed, cruelty and ugliness of human nature’.

Over the past decade, Morris Chang has turned his firm into a pivotal force in global technology and one of the world’s most valuable corporations – yet few outside the industry know the name of either this billionaire visionary or his behemoth company, let alone his remarkable personal story.

Winning a place at Harvard University in the US after a difficult childhood in China and Hong Kong overshadowed by war, poverty and instability, he rose steadily through the ranks of US semiconductor firm Texas Instruments.

When passed over for the top job, Chang accepted Taiwan’s offer to modernise its technology sector by creating a semiconductor industry – then left to set up his own firm, Taiwan Semiconductor Manufacturing Company (TSMC). 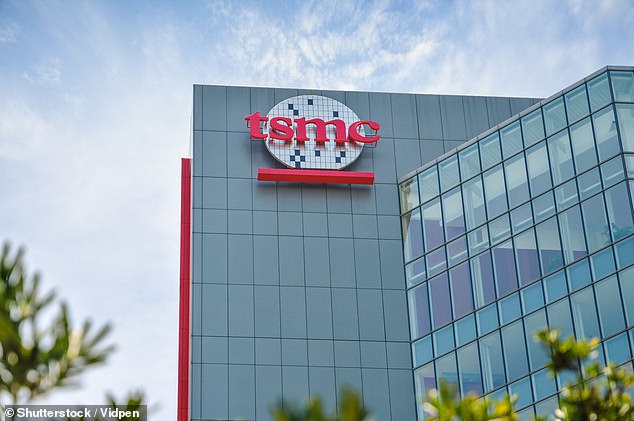 Over the past decade, Morris Chang has turned his firm into a pivotal force in global technology and one of the world’s most valuable corporations – Taiwan Semiconductor Manufacturing Company (TSMC)

His breakthrough came in 2012 when he won a contract to make chips for Apple’s iPhone. Now, just ten years later, his firm is the planet’s biggest contract chip-maker, controlling nearly 90 per cent of the market for the most advanced superconductors.

Chang’s genius was to focus on manufacturing, rather than design, since he saw that technology firms would outsource production as it became increasingly complex and costly to operate chip foundries.

This meant his rise went largely undetected since all his firm’s products appeared under other brands, while delivering vast profits to reinvest. The company’s latest multi-billion-pound plant in Tainan, the size of 22 football pitches, will soon produce the next generation of chips that are expected to be up to 70 per cent faster and more power-efficient than the most advanced ones now in production –which only one other rival, Samsung in South Korea, can make. 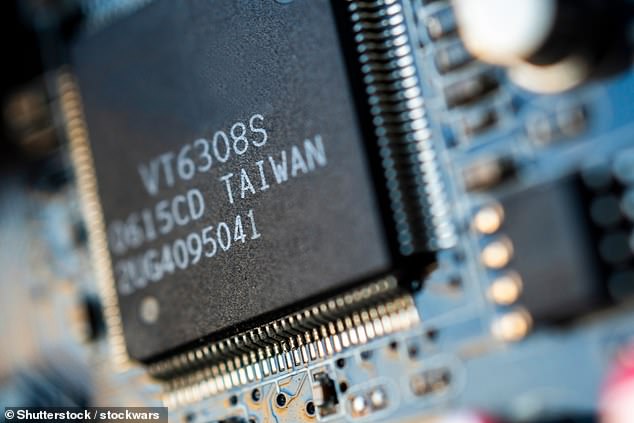 Although Chang has now stood down as chairman, he spearheaded Taiwan’s emergence as the dominant force in chip production with clusters of support firms feeding off his success. This has stirred jealousies in China and the US –with the latest alarm triggered over China’s sabre-rattling after the controversial recent visit to Taiwan by Nancy Pelosi, the US House of Representatives Speaker.

She met a top TSMC executive – as did five more US Congressional politicians a few days later – helping to fuel China’s anger over the most senior Washington figure to visit Taiwan for 25 years.

The Communist dictatorship unleashed an unprecedented show of military force in the skies and seas around Taiwan – intended to send a stark warning that it sees the island as a breakaway province, not a sovereign state. President Xi Jinping has declared China’s intention to ‘use all necessary means’ to grab the prosperous island democracy 110 miles off its coast.

The world gained a glimpse of Taiwan’s importance last year when car-makers in Germany, Japan and the US were forced to halt vehicle production and shut plants because of a shortfall of chips sparked by the pandemic.

Technology has grown increasingly central to the tussle for global supremacy between China and the US, which has forced TSMC to stop supplying Huawei, the Chinese telecoms giant that used to be its biggest customer after Apple. 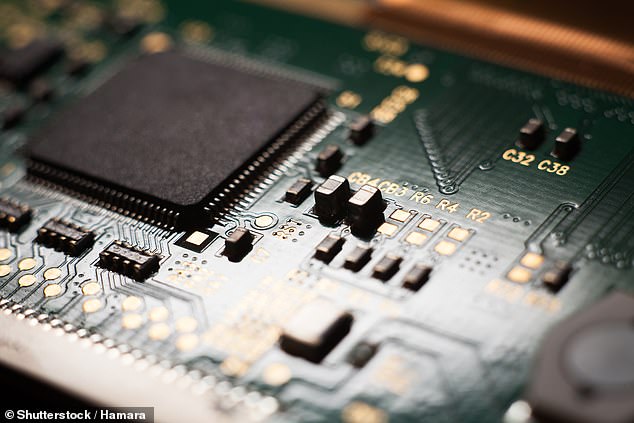 Chang’s genius was to focus on manufacturing, rather than design, since he saw that technology firms would outsource production as it became increasingly complex and costly to operate chip foundries

TSMC has opened two plants in China and is building one in Arizona. But Taiwan remains home to 15 of its production units and its most advanced production facilities, along with 57,000 of its 63,000 staff – half of whom hold doctorates or master’s degrees.

One industry analyst in Taiwan told me that Beijing had been trying to poach staff with big pay deals. ‘I’ve seen many friends go to China, but after three to five years they get sidelined after delivering all their knowledge and skills,’ she said – adding that when they return, they are treated as traitors and often struggle to find good jobs.

The big question is whether the Chinese government will stick to such tactics – or take more direct action that could have cataclysmic consequences for the entire world.