‘Take this seriously’: Why bats falling dead from the sky could KILL humans

‘Take this seriously’: Why bats falling dead from the sky could KILL humans

Residents have been warned not to touch dead bats amid fears that they could transmit a potentially deadly virus.

‘If you find an injured bat or flying fox, please do not touch it or attempt to help the animal yourself. Instead, contact the RSPCA Queensland or your local wildlife care group. Bats may carry bacteria or viruses harmful to humans,’ the warning states.

Official figures show that 233 people have potentially been exposed to deadly Australian bat lyssavirus (ABLV) in 2019, according to The Courier Mail.

Heat stressed bats and flying foxes that fall to the ground are a health risk to humans, Queensland Health has warned

Thousands of bats have died from heat stroke, with many falling onto pavements or in gardens in Queensland.

‘When people try to move a bat that appears to be dead or injured, that’s when they are most likely to be scratched or bitten.

‘Scratches, bites and bat saliva into the eyes, nose or mouth are very serious and require immediate medical assessment to prevent the potential development of ABLV infection.’ 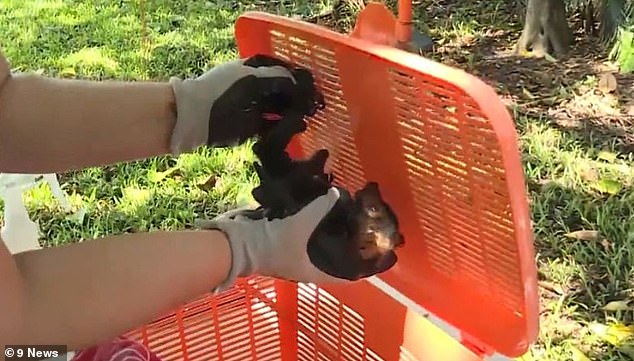 Three Queenslanders have died from Australian bat lyssavirus since 1996 – the most recent in February 2013.

The treatment for any bat or flying fox wound is to wash with soap for five minutes, apply antiseptic, and see a doctor.

There is a series of injections that can be given to stop the development of Australian bat lyssavirus.