Taking Viagra could cut your risk of developing Alzheimer’s by up to 69%, study claims

Researchers at the Cleveland Clinic in the US examined the medical data of 7million Americans in their 70s, tracking them for six years.

Results showed adults who took sildenafil, the main ingredient in the little blue pill, were 69 per cent less likely to develop Alzheimer’s compared to people who didn’t use the medication.

Lead researcher Dr Feixiong Cheng admitted clinical trials are needed to confirm whether the impotence drug can truly ward off the disease.

But separate laboratory projects showed it can increase brain cell growth and stop harmful proteins building up in the brain.

Sildenafil, which increases blood flow, is sold as Viagra to treat erectile dysfunction and as Revatio for patients with high blood pressure 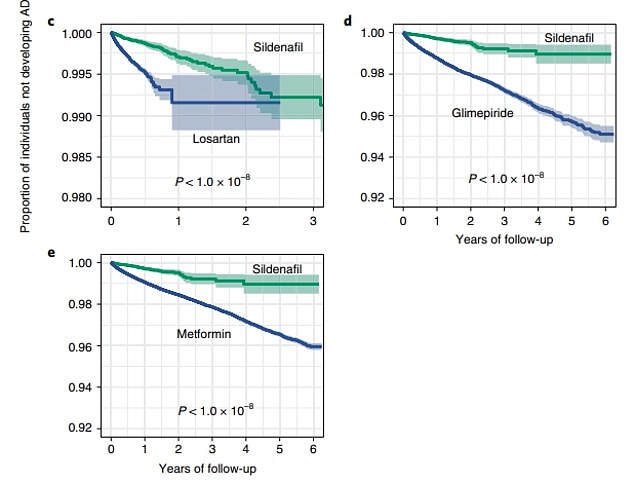 The graph shows the proportion of sildenafil users (green line) not developing Alzheimer’s, compared to two treatments being used against the disease in clinical trials (losartan and metformin), as well as anti-diabetic comparator drug glimepiride, which is not used as an Alzheimer’s treatment. Over a six-year follow up, more people remained free of Alzheimer’s who were taking sildenafil compared to those taking the other three drugs

People who have had cataract surgery are 30 per cent less likely to develop dementia, a study has found.

A study of more than 5,000 over-65s in Seattle by the University of Washington found the reduced risk lasted for at least a decade.

The findings, published in JAMA Internal Medicine, did not determine how the surgery slashed the dementia risk.

But the researchers believe that after cataract removal, people get more blue light that cataracts were blocking.

Cataracts are cloudy patches on the lens of the eye, which usually develop as a result of aging.

Blue light may reactivate cells in the retina that are associated with cognition and regulate sleep, the experts said.

Lead researcher Dr Cecilia Lee said: ‘This kind of evidence is as good as it gets in epidemiology.

‘This is really exciting because no other medical intervention has shown such a strong association with lessening dementia risk in older individuals.’

The team said the findings highlight the need for further research on how the connection between the eyes and brain affects dementia.

More than half a million Britons have the condition and the total figure is expected to reach 1.6million by 2040.

Meanwhile, more than 6million people in the US have Alzheimer’s, where rates are also expected to double in the next 20 years.

There is currently no cure but there are medications already approved to temporarily improve some symptoms, such as acetylcholinesterase inhibitors, which help nerve cells in the brain communicate with each other.

It is not known why certain people develop Alzheimer’s, but family history, smoking and being overweight are all risk factors.

Blood flow to the brain is also reduced in patients with Alzheimer’s disease, which may kill nerve cells.

Sildenafil is known to expand the blood vessels and boost blood flow to the genitals, leading experts to theorise it could improve it in the brain too.

The drug can also be given to women and children when used for treating high blood pressure in the lungs.

Increasing amounts of evidence over the last two decades has shown a buildup of amyloid and tau proteins causes changes in the brain that are a hallmark of Alzheimer’s, so the scientists examined drugs that target the two proteins.

Researchers examined a database of more than 7.2million patients and 1,600 drugs to determine if any were linked with fewer cases of Alzheimer’s.

Drug repurposing — when approved medicines also work for other conditions — is more practical and cost effective than developing new treatments, they said.

Sildenafil was the ‘best candidate’ because it targets both amyloid and tau proteins, they said.

The study, published in Nature Aging, found sildenafil users were 69 per cent less likely to develop Alzheimer’s six years after taking the drug compared to those who do not use it.

But it did not break down usage, meaning it was impossible to tell whether it had to be taken daily or infrequently.

And the drug performed better than two treatments being used against the disease in clinical trials.

Those with erectile dysfunction usually take 50mg tablets up to four hours before sex and no more than once a day, while those with high blood pressure take 20mg three times per day.

However, the study is observational, so it is not clear that taking sildenafil was behind the reduced risk of Alzheimer’s, or other factors were responsible.

In a separate experiment, the researchers made a brain cell model using stem cells from Alzheimer’s patients to examine sildenafil’s effects.

They found the drug increased brain cell growth and reduced tau proteins, which could explain how it slows changes in the brain.

He said the study shows there is a link between sildenafil and fewer Alzheimer’s cases, so the team will launch clinical trials to confirm its benefits.

‘We also foresee our approach being applied to other neurodegenerative diseases, including Parkinson’s disease and amyotrophic lateral sclerosis, to accelerate the drug discovery process,’ he said.

The rise and rise of Viagra

When it is trialled in Wales, one tester mentions that he got more erections while on it. The others say, ‘So did we!’ It’s a breakthrough moment.

The drug – now branded Viagra – is approved in the US as the first pharmaceutical product ever for erectile dysfunction. It quickly becomes one of the fastest-selling drugs of all time, with 10,000 prescriptions being issued a day.

Viagra gets its European licence. From July 1999, the NHS starts prescribing Viagra to men with underlying conditions such as Parkinson’s disease or prostate cancer – but Viagra is more widely available by private prescription or from foreign suppliers on the internet.

In Sex and the City, man-eater Samantha dates a wealthy older man who pops the blue pills. Viagra later stars in Ally McBeal and Law & Order.

The UK’s first ‘Viagra divorce’ is granted when a middle-aged woman claims the drug made her husband ‘sexually aggressive’.

In England, 1,838,687 prescription items for erectile dysfunction are dispensed. 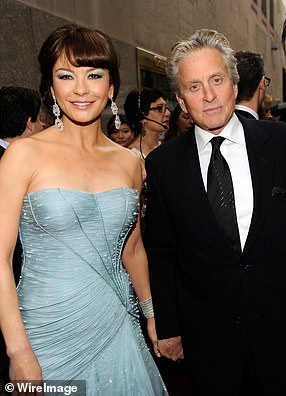 Michael Douglas says he’s glad his wife likes older men and praises the drug: ‘Some wonderful enhancements have happened in the last few years – Viagra, Cialis – that can make us all feel younger.’ It also gets its own movie: Love & Other Drugs with Jake Gyllenhaal playing a Viagra salesman.

Michael Douglas praises Viagra for ‘making us all feel younger’. ‘God bless her that she likes older guys,’ he says of his wife, the actress Catherine Zeta Jones. ‘And some wonderful enhancements have happened in the last few years – Viagra, Cialis – that can make us all feel younger.’

Viagra’s European patent expires, so with the unbranded drug sildenafil available at a 93 per cent price drop, the NHS allows prescriptions for a wider range of cases of male impotence.

The number of prescription items dispensed for erectile dysfunction has risen to 4,223,282.

Viagra becomes legally available to men over 18 via pharmacy websites and over the counter as Viagra Connect.