Taking your children outside in nature for just 10 minutes a day could stop tantrums, study claims

Just an extra 10 minutes outside in nature could help reduce temper tantrums in young children, a study suggests.

Children who were more connected to nature during the first coronavirus lockdown have been found to have better behaviour and general wellbeing.

Green space is believed to help protect young children against the mental health effects of missing out on school, normal daily routines and friendships.

Just an extra 10 minutes outside in nature could help reduce temper tantrums in young children, a study suggests (stock image)

What are temper tantrums?

Temper tantrums usually start at around 18 months and are very common in toddlers. Hitting and biting are common, too.

One reason for this is toddlers want to express themselves, but find it difficult. They feel frustrated, and the frustration comes out as a tantrum.

Once a child can talk more, they’re less likely to have tantrums. By the age of 4, tantrums are far less common.

These ideas may help you cope with tantrums when they happen.

Researchers recruited 376 families with children aged three to seven, asking them if the youngsters’ connection with nature had increased, decreased or stayed the same between April and July last year.

Parents were also asked about their children’s general behaviour, including aggression, hyperactivity and ‘acting out’ with things like temper tantrums.

The results show children who were more interested in nature had a significantly lower level of behavioural problems than those whose connection with gardens, parks and similar green spaces decreased.

They also had a lower level of emotional problems.

Samantha Friedman, who led the study from the University of Cambridge, said: ‘We know that access to and engagement with nature is associated with wide-ranging benefits in children and adults, including lowering levels of anxiety and depression, and reducing stress.

‘Connecting with nature may have helped buffer some UK children against the effects of the lockdown.’

She added: ‘Our study revealed the wide range of ways that parents can help children get more connected to nature.

‘This might be a bit daunting to some, but it doesn’t have to be camping in the woods and foraging for food – it really can be as simple as going for a walk near your house or sitting outside for ten minutes a day.’

The study, published in the journal People and Nature, looked at children aged three to seven because they were likely to experience a lot of disruption due to the pandemic, and also have less understanding of what was happening.

Researchers asked parents if their child’s connection to nature had changed, which some interpreted as them spending more or less time in green spaces, while others took it to mean being more or less interested by nature (SUBS – pls keep). 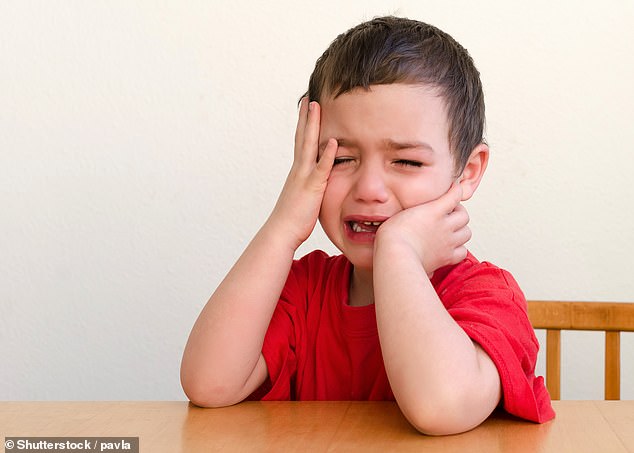 Temper tantrums usually start at around 18 months and are very common in toddlers. Hitting and biting are common, too (stock image)

Giving your child screen time to calm them down could make tantrums even WORSE, scientists warn

Giving toddlers a smartphone or a tablet to calm them down could make their tantrums even worse, a new study warns.

In experiments, US researchers observed toddlers between the ages of two and three after a cartoon they were watching ended prematurely.

Parents were also asked questions about how heavily they relied on electronic media, including TVs, tablets, phones and video games, to calm their child down.

Toddlers who were more used to being given electronic media to prevent a tantrum had more extreme emotions when it was removed, the experts found.

Although letting a toddler play on a phone or tablet seems like a harmless way to distract them when they are being difficult, in the long-run, this can make reactions worse and worse when they’re taken away.

Researchers advise parents that they should avoid using smartphones and tablets as their main strategy to avoid a potentially embarrassing tantrum in a public place.

Almost 54 per cent of young children had a deeper ‘connection’ to nature during the first lockdown for Covid-19, according to their families.

Parents most commonly reported this was because their children became more aware of nature, and interested or excited by it, and the family had more spare time to spend outdoors, doing things like planting flowers in the garden.

To judge children’s behaviour, researchers questioned their parents on things like whether they often had temper tantrums, were generally obedient, often fought with other children, lied, cheated or stole.

The families were also asked about children’s hyperactivity, which included being restless, fidgety and failing to finish tasks.

Children who had more of a connection to nature during the lockdown had a lower level of behavioural problems than those whose connection decreased – perhaps because parks and farm parks were closed, or woodland was now too far away.

These emotional problems were lower in children who became more connected to nature, compared to those whose connection decreased or stayed the same.

Children from less affluent backgrounds were more likely to be among the 6.6 per cent whose connection to nature decreased.

Dr Elian Fink, a co-author of the study from the University of Sussex, said: ‘Connecting to nature may be an effective way of supporting children’s wellbeing, particularly as children return to normal routines, such as school and extracurricular activities.