Elena Mondal was found hanged after she felt she was being snubbed by her school friends, an inquest heard yesterday

A talented teenager was found hanged after she felt she was being snubbed by her school friends, an inquest heard yesterday.

Elena Mondal, a pupil at one of the country’s top grammars, may have hoped she would be discovered before it was too late, a psychiatrist said.

The 14-year-old, who was often top of her class and wanted to be a doctor, was found unresponsive in the school grounds.

A police search for Elena, who had received counselling over eating issues and self-harm, had initially focused on the wrong location as a result of faulty mobile phone data.

She was found in a wooded area by a teacher at The Henrietta Barnett School in Hampstead Garden Suburb, North West London, but died in hospital.

Her parents Shyamal and Moushumi feared she was being bullied, the inquest at Barnet Coroner’s Court heard. Their barrister Susan Jones questioned a police officer, Detective Constable Simon North, over Elena’s phone.

Mr North told the inquest there was ‘minimal’ use of the phone on the day of her death last June. But he confirmed that deleted texts would not show up on the record and Mr Mondal was heard to exclaim that ‘everything had been deleted’ from the device.

Elena was receiving counselling from Barnet’s child and adolescent mental health service and had been assessed at the Royal Free Hospital in Hampstead. Mental health professionals were concerned by an apparent eating disorder and superficial self-harming. 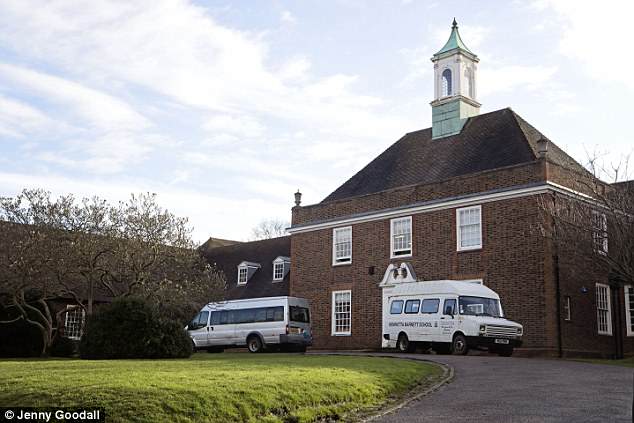 She was found in a wooded area by a teacher at The Henrietta Barnett School (pictured) in Hampstead Garden Suburb, North West London, but died in hospital

But no one believed she was at imminent risk of suicide, the inquest was told. Dr Emily Hallgarten, a psychiatrist at the Royal Free, said she believed Elena felt excluded by her friends after not being included in a WhatsApp group. She advised the school about this.

Kelly Barry, Henrietta Barnett’s operations and well-being manager, said Elena had been asked to see the school counsellor over concerns about missing meals and feelings of depression, but that she had missed appointments.

Incidents had included her being found sobbing hysterically, fleeing a classroom clutching a pair of scissors, collapsing in a corridor and cutting her arms in a toilet.

Addressing fears that an academic ‘hothouse culture’ at the girls’ grammar – the top performing state school in the country in the Sunday Times league table in 2016 and 2017 – could be leaving pupils at risk of mental health issues, Miss Barry said: ‘It is not unusual for teenage girls at different points to engage in experiments with food or self harm.’

She said one in ten of her pupils might suffer with eating issues or self-harm, a typical proportion.

Psychiatrist Dr Cathy Wainhouse said Elena may not have intended to die, hoping she would be found by her school friends before it was too late, but her ‘dramatic statement’ had gone terribly wrong.

The inquest was adjourned to allow an expert psychiatrist to assess the care provided to Elena.

For confidential support, call the Samaritans on 116 123 or visit www.samaritans.org