TALK OF THE TOWN: Not even Jude can turn the tide

TALK OF THE TOWN: Not even Jude can turn the tide as film star reveals he feared for his life making his latest drama in…Essex

He has previously filmed in war-torn Afghanistan but Jude Law has revealed how he feared for his life making his latest drama in… Essex.

The star shot Sky Atlantic’s The Third Day at Osea Island, which is cut off from the mainland at high tide, and recalls once seeing a crew member ‘literally floating away’.

‘It is important to know the speed at which this tide comes in,’ says Jude. ‘It really does put you at risk. 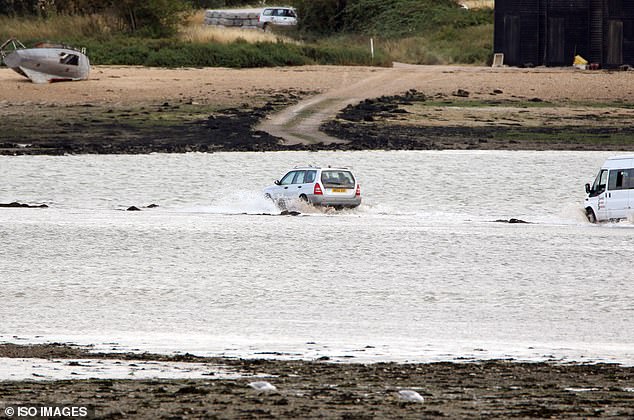 The location is cut off from the mainland at high tide, and the star recalls once seeing a crew member ‘literally floating away’

‘We barely made it back along that perilous access road because the water was literally rising up around the car’ – as our snap shows.

He may be a Hollywood star now but former football hard man Vinnie Jones hasn’t forgotten his roots from the mean streets on Watford.

When A-list actress Angelina Jolie tried to engage Vinnie in conversation on the set of their action thriller Gone In 60 Seconds, he snarled at her: ‘Leave it out, love!’

Angelina had noticed that Vinnie wasn’t impressed with co-star Nicolas Cage as he regaled the rest of the cast with tales between takes.

Vinnie recalls: ‘Nicolas would hold court and come out with c*** and they’d all laugh nervously but I’d walk away. One day I started doing sit-ups.’

It’s a good job that Harry and Meghan have signed a megabucks deal with Netflix – my spies in Los Angeles tell me the cleaning bill for their Californian mansion will set them back a whopping £60,000 a year.

Well, that’s unless Harry decides to put on a pinny and brandish a feather duster himself, of course…