TALK OF THE TOWN: Prince Harry goes wild… for a honeymoon in Namibia

It’s remote, barren and dangerous – yet news reaches me that Prince Harry has his heart set on a honeymoon in Namibia with Meghan Markle

It’s remote, barren and dangerous – yet news reaches me that Prince Harry has his heart set on a honeymoon in Namibia with Meghan Markle.

Contrary to reports suggesting that he will whisk Meghan off to the Caribbean after the wedding on May 19, I hear Harry will instead turn to luxury lodge company Natural Selection to organise an adventure in the huge south-west African country.

A source says Harry and Meghan have been advised to use a number of different lodges to keep people guessing about their whereabouts.

One of Natural Selection’s newest attractions is the Hoanib Valley Camp, a four-hour drive by car from the nearest town. The £500-a-night lodge is still being built – but, intriguingly, is due to be completed in May.

The chances of bumping into hordes of camera-wielding tourists will be pretty remote in Namibia.

It is one of the least populated places in the world, home to the highest sand dunes on the planet, and the deepest canyon in Africa.

The indigenous population is the 50,000-strong Himba tribe. 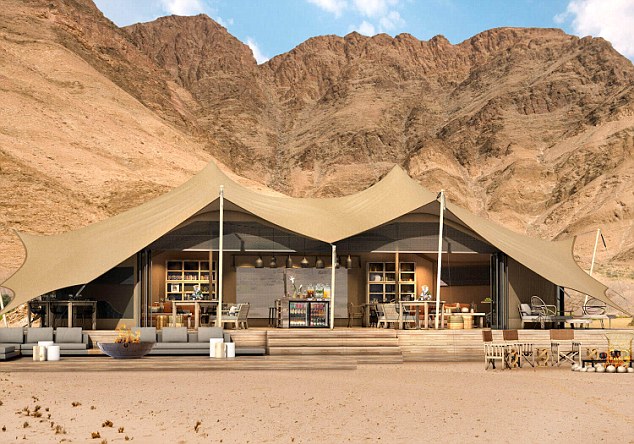 One of Natural Selection’s newest attractions is the Hoanib Valley Camp, a four-hour drive by car from the nearest town. The £500-a-night lodge is still being built – but, intriguingly, is due to be completed in May

In Namibia, black rhino and desert-adapted giraffe and elephants can all be tracked on foot.

l I hear that Meghan’s hen party will be organised by Soho House group’s global membership director Markus Anderson. The group’s 300-year-old stately home Babington House in Somerset has emerged as a favourite to host the event.

We know him as the straight-talking Sherlock, but in real life it seems Benedict Cumberbatch, below, has gone all Hollywood by hiring a ‘monk’. My spies first spotted the Old Harrovian with a ‘spiritual adviser’ backstage at the Graham Norton Show, and the man has been popping up by Benedict’s side ever since. My source says: ‘Benedict was very zen backstage and spent the whole time talking to someone who looked like a monk, which the crew found highly amusing.’

I wonder if the move could be connected to the star’s fascination with Buddhism – he has talked of going on a retreat with a Buddhist teacher ‘to clear and purify the mind’. His spokeswoman was unavailable for comment yesterday.

Oxford University’s student magazine, The Isis, is under surveillance by the Home Office – thanks to its unfortunate name.

The arts and culture publication, which has 7,500 readers and 4,300 followers on Facebook, has been plagued since 2014 by pesky extremists seeking to join up – despite the fact that its Brideshead Revisited-style pieces about life at the university are surely not what they’re after.

‘We get sent emails and Facebook messages by people who think we are the terrorist group Islamic State,’ says editor Emily Lawford.

‘We’ve been reporting them to the police and now I think our emails are being monitored by the Home Office.’

I wonder what the late thriller writer Graham Greene – once a contributor to the 126-year-old mag, would have made of it all.