TALK OF THE TOWN: TV Adrian’s love match… with a Labour MP

TALK OF THE TOWN: Football pundit Adrian Chiles is dating Labour MP Rosie Duffield after interviewing her for the BBC’s Panorama

Football pundit Adrian Chiles has found love – with a Left winger. I can reveal the unlucky-in-love broadcaster is dating Labour MP Rosie Duffield after interviewing her for BBC 1’s Panorama show.

They’ve been spotted looking rather cosy around Westminster and sources say Chiles – former host of the BBC’s Match Of The Day 2 and then presenter of ITV’s football coverage – has visited the politician close to the Houses of Parliament and they are in the early stages of a romance.

While it is unclear how they met, in February Chiles, 52, visited Rosie in her Canterbury constituency in Kent to interview her for a Panorama TV show he was hosting about Brexit. The pair discussed Britain’s departure from the EU as part of the Brexit: Who’s In Charge? series.

One source tells me: ‘It’s the talk of the House of Commons, especially after they were seen together. They appear to be very keen on one another indeed.’

Rosie, 48, was elected in 2017 and is a single mother to two boys. She has come under fire during her time as an MP. In October 2017, she apologised to the Canterbury LGBT community for accepting £500 to appear on Russian state-owned broadcaster RT amid a deteriorating climate for LGBT citizens in Russia. She was also criticised for campaigning against grammar schools – at the same time as sending her children to one.

Just days before Christmas in 2017, Rosie got engaged to a former maths teacher, Michael Anderson, who popped the question two years after they met at a Labour Party event.

She proudly posted a picture of her sparkler on Twitter, writing alongside it: ‘2017 will do gown as quite a memorable year’. But the couple called off their engagement around 12 months later.

Chiles’s previous romances have all ended in disaster.

He was married to Woman’s Hour presenter Jane Garvey for ten years but split in 2008.

Then, after meeting on his That Sunday Night Show in 2011, he began dating comedian Catherine Tate. But they separated in December 2013.

A political source now tells me that Adrian and Rosie ‘appear very happy together’.

So I wonder, could unlucky-in-love Chiles finally have found The One?

Game Of Thrones star Sophie Turner has turned to a therapist for help after her beloved dog was run over.

Blissful newlyweds Sophie, 23, and US singer Joe Jonas, 29, had shared this Instagram snap of themselves enjoying life alongside their dog Waldo Picasso, below.

But the canine was killed while being taken out by their dog walker in Manhattan last week, leaving English actress Sophie seeking therapy. The Alaskan Klee Kai was an Instagram star himself, with 45,500 followers. 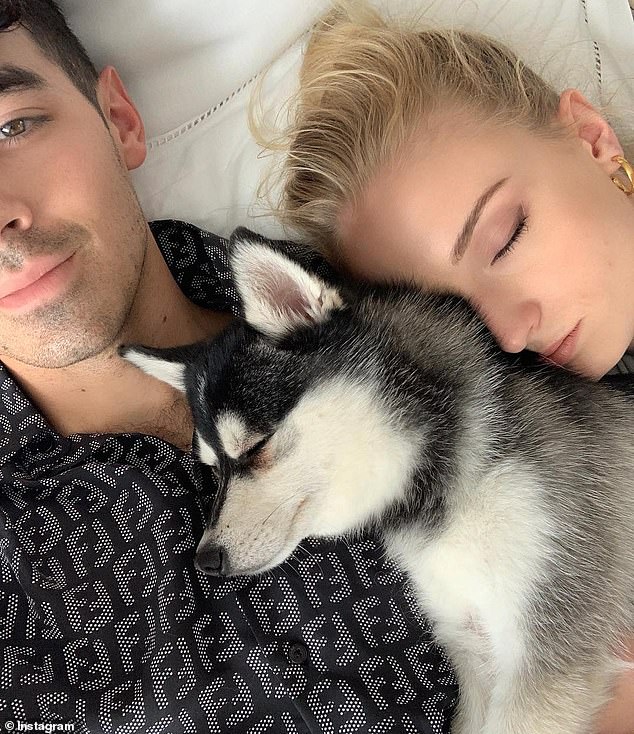 Blissful newlyweds Sophie, 23, and US singer Joe Jonas, 29, had shared this Instagram snap of themselves enjoying life alongside their dog Waldo Picasso