Mention the happy news that his wife is pregnant with his first child and Matthew Wright turns pale.

His face displays the full gamut of horrified expressions in quick succession – a bit like when a cartoon character sticks its finger in an electric socket.

Then he blurts out a noise that sounds a bit like, ‘Wa-ha-ha’ and flails his arms around hysterically.

There’s joy, shock, surprise and excitement all etched on the talk show host’s face. But mostly there’s fear. Fear of the unknown.

Fear of the impact a baby will have on his life. Fear of the pregnancy not progressing normally. But the overwhelming fear, he says, is that his wife Amelia will die.

‘I’m amazed and overwhelmed,’ says TalkRadio DJ Matthew, 53. ‘I’m trying to set the fear and paranoia aside and focus on the positives. But getting here’s been so traumatic for us both, all I want is for Amelia to still be alive at the end of it.’

It’s taken ten years to get this far and you can see why Matthew is scared. The pair only started trying for children through IVF after an unplanned ectopic pregnancy (where a fertilised egg implants itself outside the uterus, usually in the fallopian tube) almost killed record company executive Amelia and ruined the couple’s chances of having children naturally in the future. 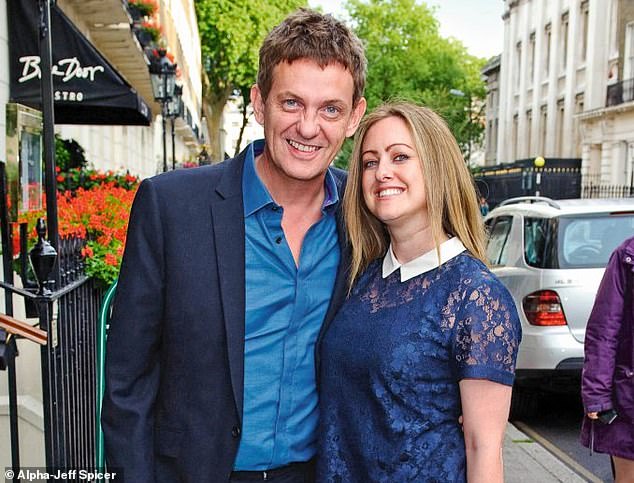 Matthew Wright’s wife Amelia (pictured together) is four-and-a-half months pregnant – but the pair have been through a ten-year ordeal to get here. Amelia nearly died after an ectopic pregnancy, and then had six miscarriages over a six-year period 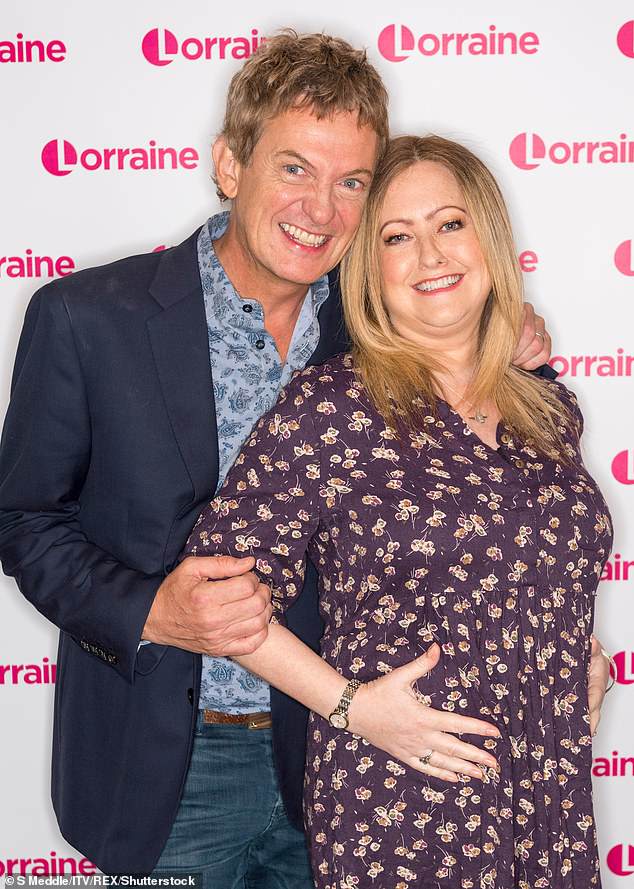 The TV host has spoken out about the ‘traumatic’ journey he and his wife Amelia, who is due to give birth in February, have had in their efforts to start a family

Since then, Amelia has conceived six times via IVF – only to miscarry at around 11 weeks each time. It’s been a horrifically bruising and difficult experience.

‘I didn’t think I could have children,’ says Matthew. ‘I’d been married before and nothing happened so there didn’t seem any point in Amelia being on the Pill.

‘The first time we knew she was pregnant was when she had a miscarriage. It turned out she was carrying twins and the other one was stuck in one of her fallopian tubes and carried on growing.

‘Then came the day I’ll never forget as long I live. She came home from work, went a bluey grey and collapsed.

‘I’d been doing a show that day about the new non-emergency NHS number 111 so I rang them, but when I said she was unconscious they told me to call an ambulance.

‘The ambulance arrived before I got off the phone and we were at the hospital in ten minutes, but it was seven hours before she was attended to.

‘No one could find the key to the ultrasound suite, then they couldn’t find a sheath to go over the probe they wanted to use on her.

‘Finally they sent me home, only to call me just as I was putting my keys in the door to say they were about to operate to remove the embryo.’

Afterwards it was discovered that one fallopian tube was ruptured and the other severely bruised, and the couple were told they’d need help if they wanted to have a baby in the future. Matthew says it was Amelia who pushed the process along. 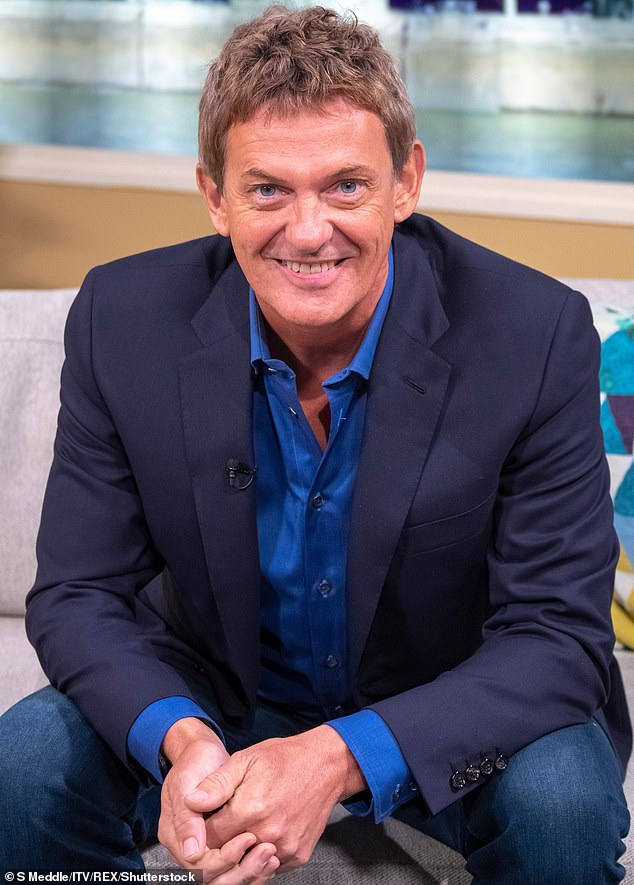 Leaving them emotionally battered and drained, the pair almost gave up, until they had to make a decision about the last embryo they had for IVF. They decided to give it a go, and now they have a little girl on the way who is due to be born by Caesarean section on Valentine’s Day

‘If I’m honest, I’ve never wanted children,’ he reveals. ‘But I couldn’t deny that to Amelia.

‘I have friends where there’s been pressure from the male partner not to have kids, and by the time some of them decided to try it’s been too late. If I denied Amelia a baby, I couldn’t live with myself.

‘When we started with IVF we had the advantage of time because Amelia was only 32,’ says Matthew, who was 42 at the time. ‘The egg harvesting [which involves having hormone injections to boost the egg supply, followed by a small operation to collect them] went well but each time the embryo was implanted it would die at 11 weeks, which is quite late.

‘After six miscarriages Amelia was emotionally and physically battered. It was awful to see her go through that pain. You feel totally helpless and inadequate. So we stopped trying.’

But early this year, four years after they last tried, they had to make a decision. They had one embryo left; they could either have it implanted now to give the best chance of succeeding or give it up to medical research.

‘There were lots of discussions and Amelia was erring towards saying no,’ Matthew recalls.

‘But as she felt physically and mentally stronger she decided that maybe it was worth one last try. But we both agreed it was definitely the last roll of the dice.’

Amelia is now four and a half months pregnant with a little girl who is due to be born by Caesarean section on Valentine’s Day. But on several occasions the pair thought they might lose this baby too.

Because the previous embryos had died at 11 weeks, around the time a foetus starts placental feeding, doctors suspected it might have something to do with her blood being too thick for her placenta, so they put her on blood-thinning pills. But that meant her blood didn’t clot properly, and at nine weeks Amelia started bleeding.

‘We thought it was all over, but they said the baby was fine though there was a bruise on the placenta, which meant Amelia had to come off the pills to stop the bleeding,’ says Matthew.

‘We didn’t know what would happen. We got past 12 weeks but at about 13 weeks she was back in hospital because she was feeling pain. It turned out to be the baby kicking.’

Amelia, now 42, has also had permanent sickness and has been in bed for most of her pregnancy. She’s been having two scans a week (which will now be reduced to one) because the pregnancy is still considered high-risk.

‘Who’d be a woman?’ grimaces Matthew. ‘They’re amazing creatures, but the things they have to go through!’

While all of this was going on, Matthew was having problems of his own. A close friend had killed himself a few months earlier, while Matthew suddenly found himself desperately unhappy presenting his Channel 5 talk show The Wright Stuff, which he’d worked on for 18 years.

The show had been produced by the same company, Princess, since the start, but when the contract ended Channel 5 decided on a change. 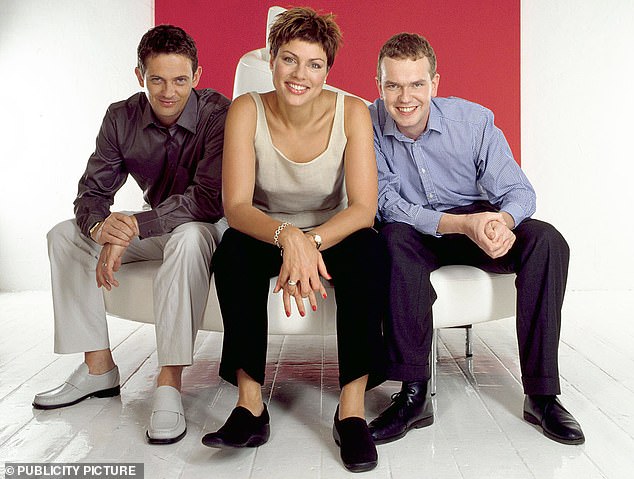 While struggling through all this, Matthew also found himself unhappy while working on The Wright Stuff (pictured: Matthew, Kate Silverton, and James O’Brien in the show’s early days), a show he started 18 years ago. He ended up quitting the show after it was given to ITN

‘The contract was given to ITN and everyone I’d worked with for years was made redundant. Also, ITN is a news company but The Wright Stuff is an entertainment programme and I felt they struggled to get that side of it.

‘The show was going in the wrong direction. Channel 5 wanted me to be outrageous, but when something controversial happened I felt they hung me out to dry.’

In March there was a debate on the show between transgender rights activist Paris Lees (who’s recently appeared on Channel 4’s Celebrity Island With Bear Grylls) and The Chase’s quizmaster Anne Hegerty about the gender pay gap. When Anne said to Paris, ‘You used to be a boy’, Channel 5 demanded that Matthew apologise the next day on air. He refused.

‘It was a relatively small thing but it just added to everything else,’ he says. ‘Paris took no offence, particularly when she realised Anne was autistic and speaks very bluntly.

‘I felt Anne was treated unfairly. It seems Orwellian that you can’t mention someone’s gender at birth, and it goes against my journalistic conscience.

‘It was hard to get up in the morning and be happy while your colleagues were being made redundant, your wife was starting another round of IVF and you were devastated after losing a friend. I started the year thinking I might snap. 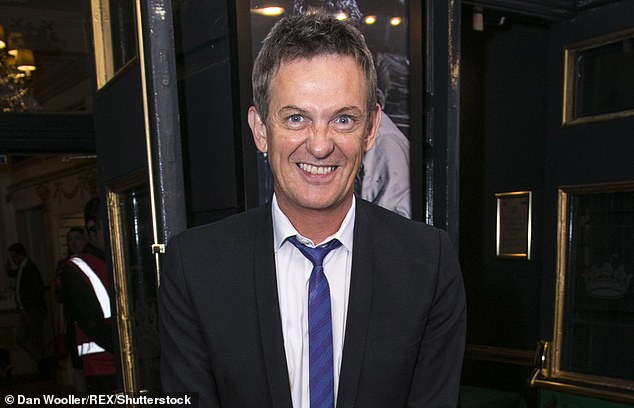 Now Matthew hosts TalkRadio’s early-afternoon slot alongside his old friend Kevin O’Sullivan. On his first day, during a feature on older parents like Rupert Murdoch and the Rolling Stones, Matthew revealed his wife was pregnant

‘I hate to use the word depressed because it’s so overused, but I was concerned for my mental health.’

So he resigned, and three days later Amelia discovered she was pregnant. Matthew’s plans to take a break from work to travel, write a book and set up a fishing company in the Caribbean were suddenly up in the air, so he was thrilled to be offered TalkRadio’s early-afternoon slot.

He appears every weekday with Kevin O’Sullivan, an old friend from his days as a newspaper showbusiness columnist.

‘After the end of The Wright Stuff I was feeling isolated so it was great to have Kevin with me to help me get my confidence back,’ he says.

‘I like the fact that TalkRadio are prepared to put two middle-aged white men together at a time when that’s the least politically right-on thing to do.

‘We’re friends who don’t agree on very much. But we’ve worked together for 25 years and I trust him. Plus we’re having a lot of fun.

‘There’s serious news on before and after us, but we play around with it; one of my favourite things was getting fortune-tellers in to see if they were better at predicting the future than Bank of England boss Mark Carney.’

But the biggest splash on the show was actually on Matthew’s first day. ‘I told Kevin there was going to be a mystery phone-in and then I gave him an envelope,’ he recalls.

‘There was a note inside that said we were going to do an item on older parents like Rupert Murdoch and the Rolling Stones – because I was going to be one! The response has been fantastic, and we might even get Ronnie Wood to come in to talk about being a dad.’

Matthew sits back, still taking it all in. I tell him to look at how Simon Cowell and George Clooney – who both said they would never have children – were loving fatherhood.

He looks petrified again. ‘I can’t even think about the baby, I just want Amelia to be OK,’ he says. ‘If she’s all right, we can cope with everything else. I think.’

The Matthew Wright Show is on TalkRadio, Monday-Friday, 1-4pm.