Tammy Hembrow shares an extreme close-up of her backside

Is that really necessary? Tammy Hembrow shares an extreme close-up of her backside as she spruiks her Saski Collection line

Tammy Hembrow is proud of her bountiful backside after years of training to build it.

But the Instagram influencer stunned her fans as she shared a close-up photo of her derriere to promote her Saski Collection line on Wednesday.

The mother-of-two left nothing to the imagination as she posed in a pair of brown booty shorts and a cropped T-shirt.

Is that really necessary? Tammy Hembrow shared an extreme close-up of her backside as she spruiked her Saski Collection line on Wednesday

In another photo, the blonde bombshell jutted out her bottom even further to accentuate her famous curves.

Tammy told body+soul last month she hopes that by showing off her incredible figure, she can inspire other women to have more confidence.

‘My body fluctuates – it’s not always its best shape ever. I’ll post photos of myself at the beach in a bikini and you can see a little bit of cellulite and stuff,’ she said.

‘And girls are always commenting on my Instagram saying, “Thank you for showing your real body.” I want to show that everybody’s body, however it is, is perfect.’ 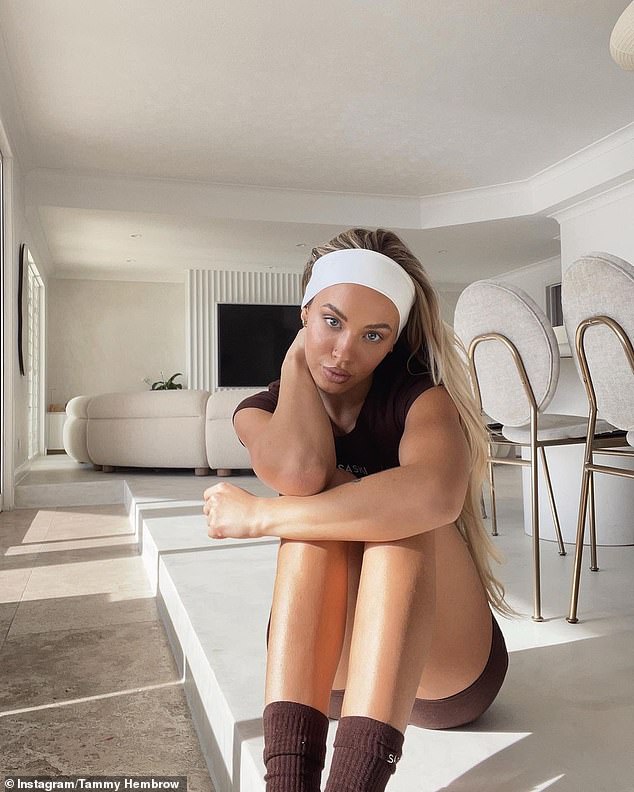 Her own advertisement: The mother-of-two posed in a pair of brown booty shorts and a cropped T-shirt

The fashion designer went on to insist her famous behind is ‘built not bought’ and is the result of hard work in the gym, not surgery.

Tammy has previously revealed she ‘hates’ it when people falsely accuse her of having undergone a Brazilian butt lift.

She told Studio 10 in December 2019: ‘I hate when people accuse me of doing that. I take such offence to it because I worked so hard and it makes me annoyed.’

When asked how she maintains such a curvy backside, Tammy said it was all down to weight training.

‘I do a lot of heavy weights. You’re not going to build any muscle if you are not doing leg weights,’ she explained.

‘I see a lot of girls doing cardio and this and that, [but] it’s not going to build any muscle really.’