Tandem Bank scraps 0.5% cashback card and will replace it with a premium option

Smartphone bank Tandem has axed its cashback credit card for new customers and from January those who want to use its successor will have to pay a membership fee.

The bank announced the card has been pulled and will be replaced with a ‘premium’ membership option, which involves an ‘undisclosed fee’.

Tandem said the new membership card will be a replacement for the cashback card and also include ‘a number of other exclusive services and benefits’, however those who want it will have to pay from next year.

The card, operated through a smartphone app, consistently featured in This is Money’s guides to the best credit cards, given it earned 0.5 per cent cashback on all spending and came with no foreign purchase fees.

You would also earn cashback on spending you did abroad, making it a great option for holidaymakers.

Tandem’s website has been updated to show that only its Journey credit card is available to those wanting to sign up.

That card comes with no foreign purchase fees, but is aimed at those with a more limited credit history, offering a higher APR of 24.9 per cent and a smaller initial credit limit of up to £1,500.

Users who currently have a cashback card will be unaffected and no changes will be made to existing customers.

Tandem hit half a million users in January this year, having taken a slightly different tack from other smartphone banks like Monzo and Starling by offering credit cards rather than current accounts.

Tandem was founded in 2013. It originally received its banking licence in 2015 but subsequently lost it.

It picked up another one in January 2018 after purchasing Harrods Bank from its Qatari owners.

The bank said customers had netted more than £1.4million in cashback since the card launched in 2018. 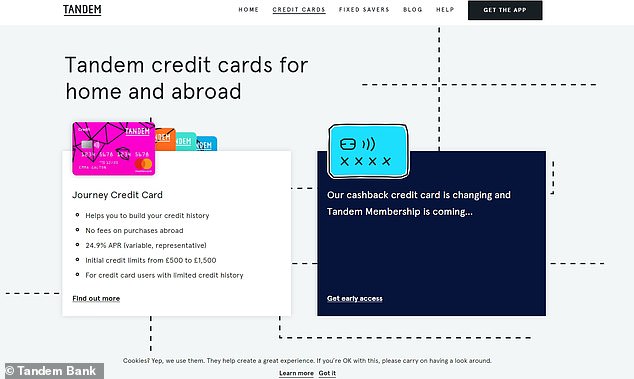 What are the alternatives?

If you are after alternatives following the scrapping of the card, there remain some decent choices out there.

Barclaycard’s Rewards credit card gives you a slightly lower 0.25 per cent cashback on all spending until the end of August 2023, as well as no foreign exchange fees like Tandem.

Meanwhile American Express’ Platinum Cashback Everyday credit card offers you a whopping 5 per cent cashback in the first three months of having the card, during which time you can earn up to £100.

After that period you’ll earn 0.5 per cent, the same as Tandem’s card, on spending of up to £5,000, and then earn 1 per cent on spending above that.

If you shop around on websites like Quidco and TopCashback, you can find yourself cashback deals without needing a dedicated piece of plastic to put those purchases on.