The Queen composed her first ever Instagram post this morning to share an image of a letter sent to her great-great grandfather, Prince Albert, by computing pioneer Charles Babbage.

She was met by dozens of cheering children who enthusiastically waved Union Jack flags as she arrived at the Science Museum in London’s South Kensington today.

The monarch visited the museum to unveil its summer exhibition, ‘Top Secret’ and formally open the new Smith Centre.

To mark the occasion, she wrote her first ever post on Instagram for the official Royal Family’s social media page, and signed it off ‘Eilzabeth R’. 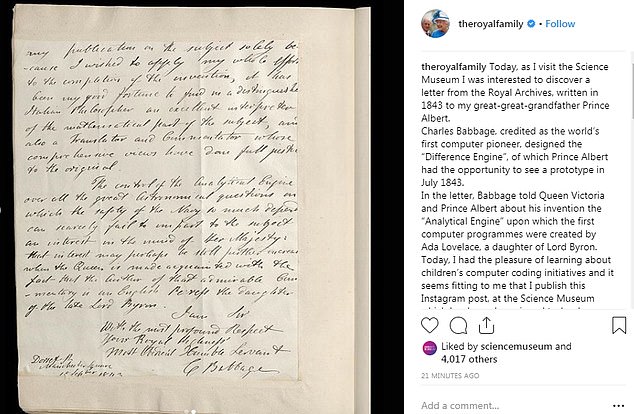 Using an iPad, she shared an image on the official royal family account of a letter from 19th century inventor and mathematician Charles Babbage to Prince Albert.

Known as a pioneer of the computer, Babbage wrote to Albert in 1843 about his Analytical Engine, a machine which could perform calculations using punched cards and had a memory unit to store numbers.

Standing in the Science Museum’s new Smith Centre, the Queen was applauded after she shared the post on the royal Instagram account which was launched in 2013 and now has 4.6 million followers. 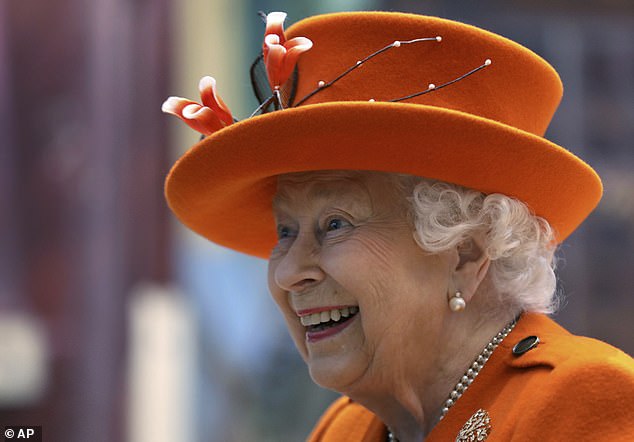 Using an iPad, she shared an image on the official royal family account of a letter from 19th century inventor and mathematician Charles Babbage to Prince Albert 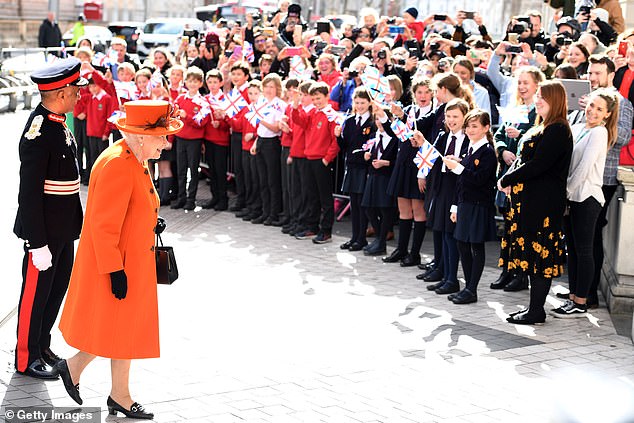 She wrote: ‘Today, as I visit the Science Museum I was interested to discover a letter from the Royal Archives, written in 1843 to my great-great-grandfather Prince Albert.

‘Charles Babbage, credited as the world’s first computer pioneer, designed the ‘Difference Engine’, of which Prince Albert had the opportunity to see a prototype in July 1843.

‘In the letter, Babbage told Queen Victoria and Prince Albert about his invention the ‘Analytical Engine’ upon which the first computer programmes were created by Ada Lovelace, a daughter of Lord Byron. 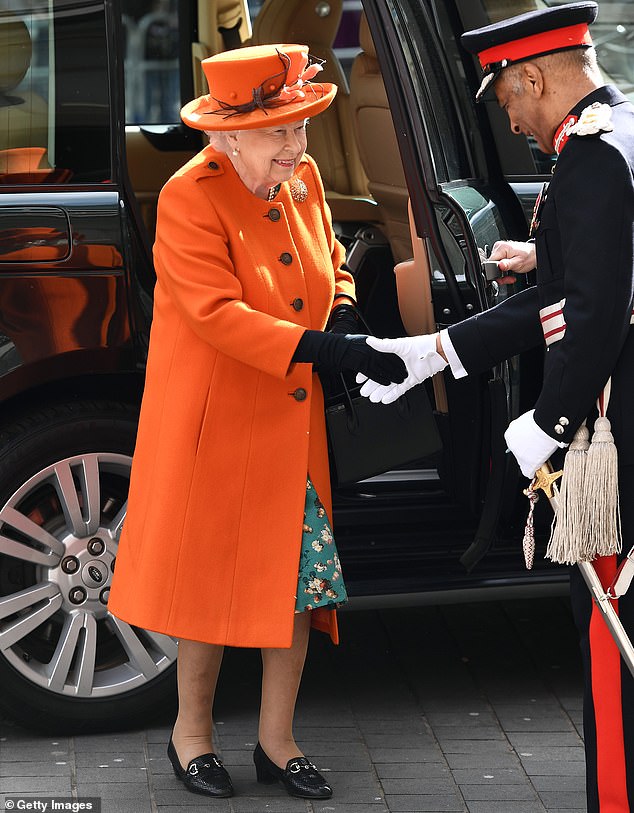 The royal wore a distinctly spring-like tangerine orange coat and hat over a green flowered dress. She accessorised with black gloves, her trademark low black heels and a black handbag 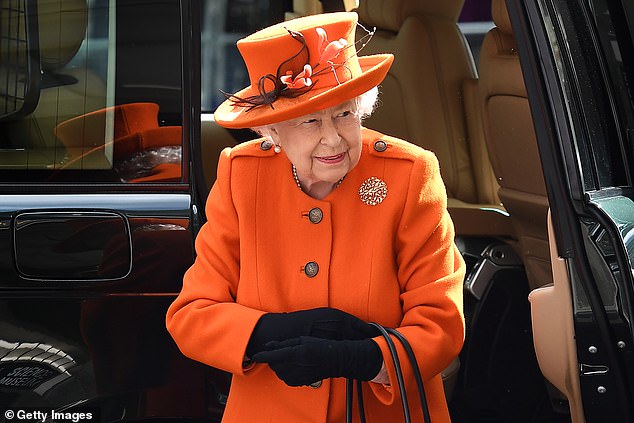 The Queen also sported a large brooch, a pearl necklace and pearl earrings. Her makeup was kept light and natural, with a rose-coloured lipstick setting the look off

‘Today, I had the pleasure of learning about children’s computer coding initiatives and it seems fitting to me that I publish this Instagram post, at the Science Museum which has long championed technology, innovation and inspired the next generation of inventors. Elizabeth R.’

As part of the visit to the Science Museum,  the Queen also viewed iconic communications objects from throughout history, including an enigma machine and the computer on which the World Wide Web was created. 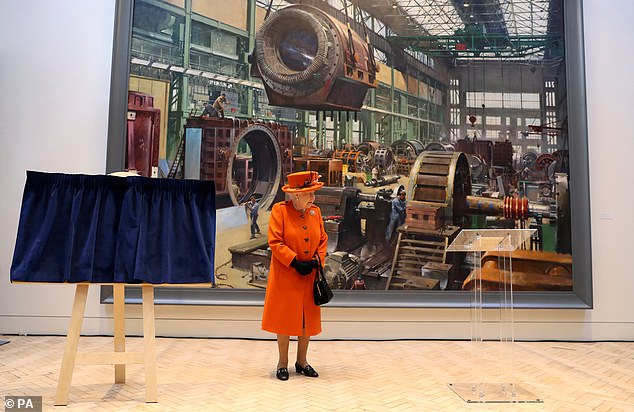 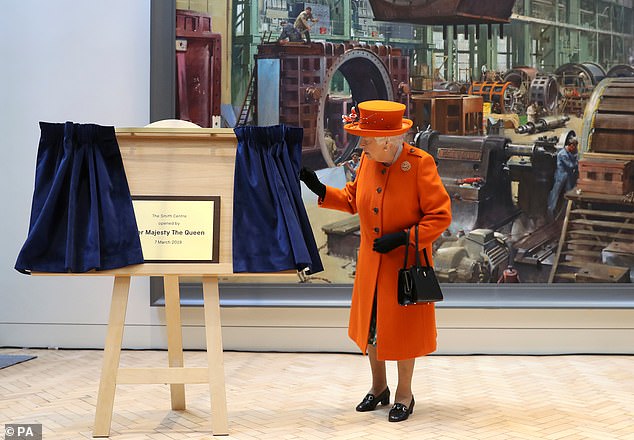 The monarch visited the museum to unveil its currently under wraps summer exhibition, ‘Top Secret’ and formally open the new Smith Centre

A Buckingham Palace spokesman said: ‘The Queen has long been a supporter of digital communications tools, and she sent her first tweet during her last visit to the Science Museum in 2014.

‘In a similar act, The Queen launched the first British Monarchy web site in 1997. Her Majesty sent her first e-mail in 1976, during an engagement at a military base.

WHO WAS MATHEMATICIAN AND COMPUTER PIONEER CHARLES BABBAGE?

Charles Babbage was a mathematician, inventor and mechanical engineer who is credited as the first person to propose a programmable computing device.

He invented the first mechanical computer that eventually led to more complex electronic designs, though all the essential ideas of modern computers are to be found in Babbage’s original analytical engine.

Born in London in 1781 and raised in Devon, Babbage became interested in mathematics as a child and went on to study at Cambridge.  After graduation, he was invited to lecture to the Royal Institution on calculus and was elected a Fellow of the Royal Society in 1816.

Between 1813 and 1868 he published six full-length works and nearly ninety papers.

In 1823 Babbage obtained government support to design of what he called the Difference Engine, a digital computing machine for the automatic production of mathematical tables. He never completed the full-scale machine and his government funding was stopped.

Babbage went on to propose an even more complex computing machine which he called the Analytical Engine, intended to be able to perform any arithmetical calculation; it is on this creation that his reputation as ‘the father of computers’ was built.

The machine would use a series of punched cards connected by ribbons – Babbage’s inspiration for these came from the Jacquard loom, invented in 1804 – that would deliver the instructions, as well as a memory and central processing unit, or ‘mill’, to store information the machine generated.

Babbage worked closely on the Analytical Engine with Ada Lovelace, daughter of the poet Lord Byron. Lovelace was the first to see that the machine had the potential computation beyond the numeric, and might, for example, have the capability to compose music.

The modern computer programming language ADA is named after her.

A large model of the Analytical Engine was under construction at the time of Babbage’s death in 1871 but a full-scale version was never built.

Researchers are currently trying to fund the construction of the full-sized machine in time for the 150th anniversary of his death in 2021.

‘There is a long association between The Queen and the Royal Family and Technology.’

The royal wore a distinctly spring-like tangerine orange coat and hat over a green flowered dress for the visit. She accessorised with black gloves, her trademark low black heels and a black handbag.

The Queen also sported a large brooch, a pearl necklace and pearl earrings. Her makeup was kept light and natural, with a rose-coloured lipstick setting the look off.

Pupils from St Osmund’s School in Richmond were among those outside to greet the Queen as she arrived.

During her reign the Queen has encountered a rapidly-changing world of technology, from the advent of colour television to mobile phones and the internet.

Television cameras were allowed inside Westminster Abbey in 1953 to film her Coronation and more than half a million extra TV sets were sold in the weeks running up to the historic event. 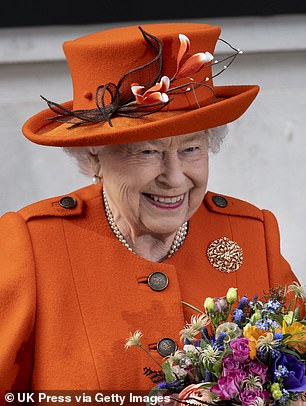 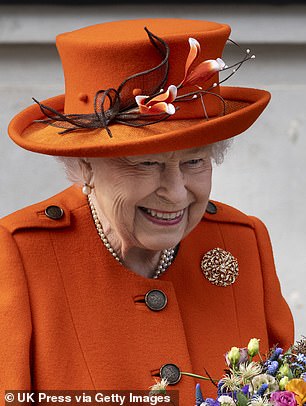 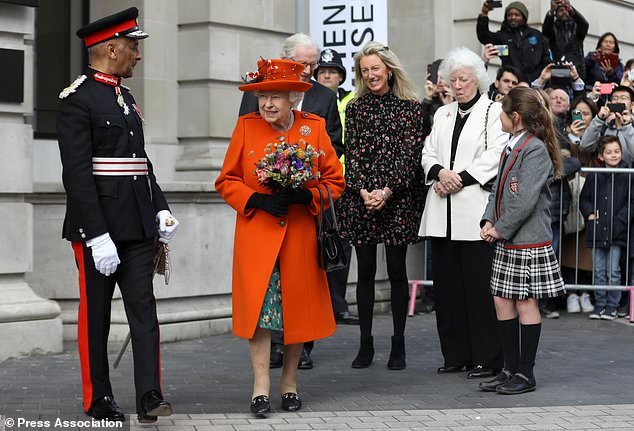 The Queen leaves the Science Museum after announcing its latest exhibition 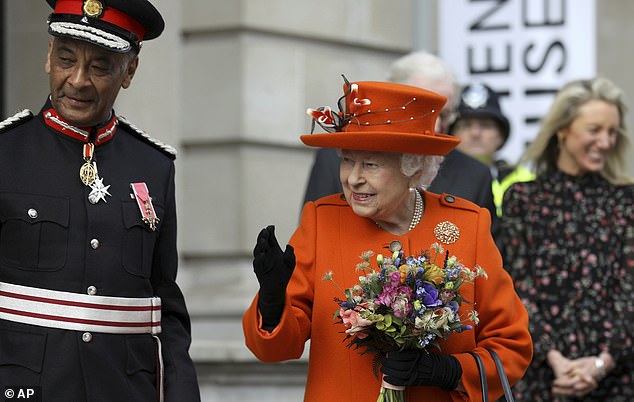 During her reign the Queen has encountered a rapidly-changing world of technology, from the advent of colour television to mobile phones and the internet

Five years later, she made the first trunk call in the UK and, when email technology was in its infancy, she became the first monarch to send one of the electronic messages – during a visit to an Army base in 1976.

The concept of video-sharing website YouTube was explained to her by Princesses Beatrice and Eugenie before she launched her own channel on the site in 2007 to promote the British monarchy.

Her own website, www.royal.gov.uk, was launched in 1997 during a visit to Kingsbury High School in Brent, north-west London.

Other technological milestones for the Queen include personally uploading a video on to YouTube during a visit to the Google offices in London in 2008, and in 2014 she posted her first tweet under her own name to declare the opening of the new Information Age Galleries.