A self-confessed tanning addict refuses to quit her addiction despite being diagnosed with skin cancer.

Sarah Boyton, 51, from Enfield, Middlesex, spent decades not protecting her skin in the sun and was so fond of sunbeds she had one installed in her house.

The cafe owner said she was not surprised when doctors discovered a cancerous growth beneath her eye in October 2016, leading to two operations and leaving her with a scar.

Addicted: Sarah Boyton, 51, from Enfield, Middlesex, spent decades not protecting her skin in the sun and was so fond of sunbeds she had one installed in her house 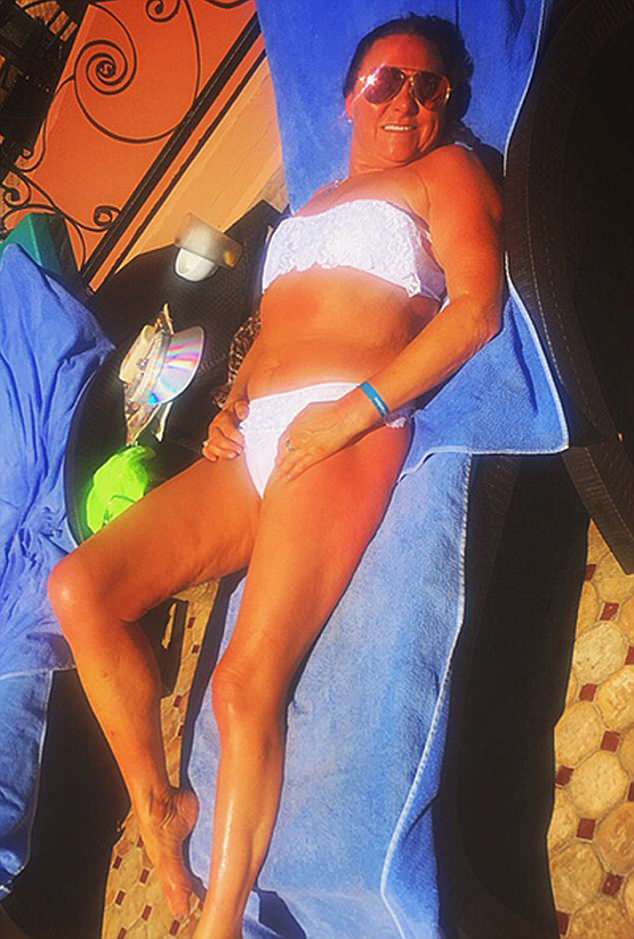 Sun seeker: Sarah still jets off for two sun-soaked holiday in a year and soaks up the rays 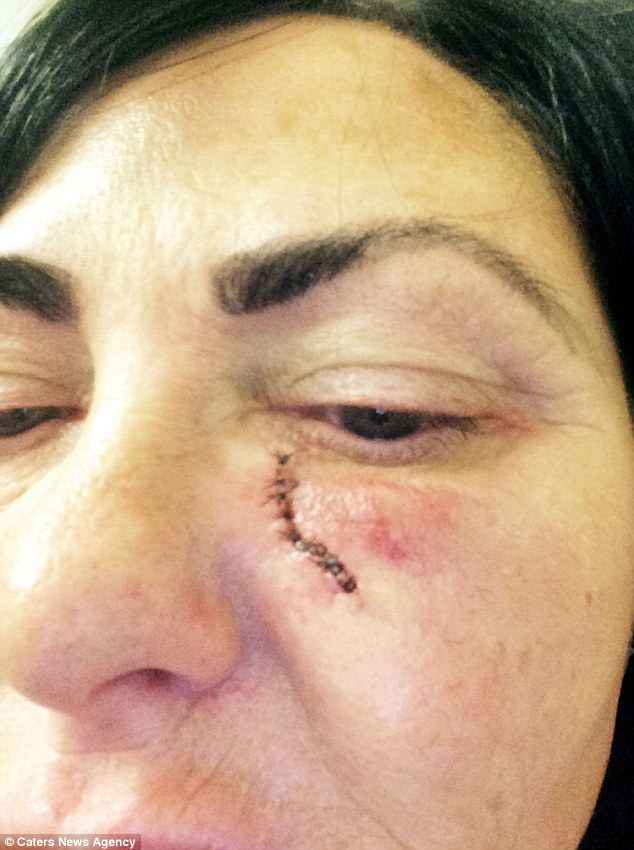 Operation: She was diagnosed with skin cancer in October 2016 and had the growth removed

However Sarah continues to enjoy two sun-soaked breaks each year – although she now protects parts of her face with SPF 50 and uses SPF 10 on the rest of her body.

She said: ‘I love lying in the sun, the feeling of the warmth on my skin, I know I shouldn’t go out in it but I can’t help myself. I’m addicted to being brown and I’ll stop at no lengths to ensure I have a natural glow.

‘I grew up never wearing sun cream and I even had a sunbed in my house so I could go on it whenever I fancied topping up my tan.

‘I do now wear sun cream but at the most it’ll be factor 10 and by the end of my holiday I’ll swap to oil.’ 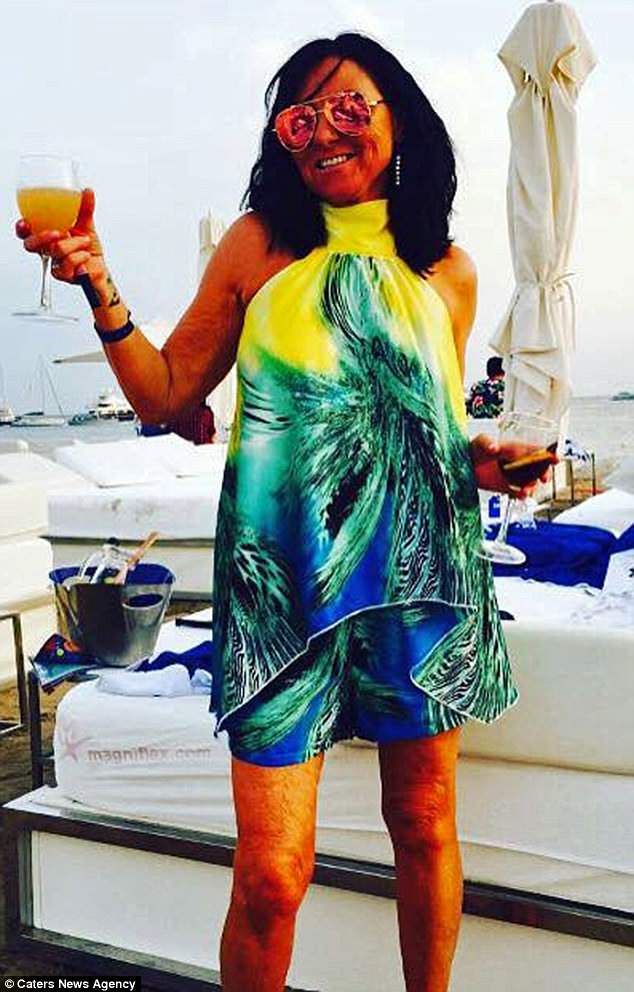 ‘I can’t help myself’: Sarah shows off her tanned skin during one day out in the sun Relaxed: Sarah explained she stopped taking life too seriously after her son Jack, 17, died in a car crash five years ago 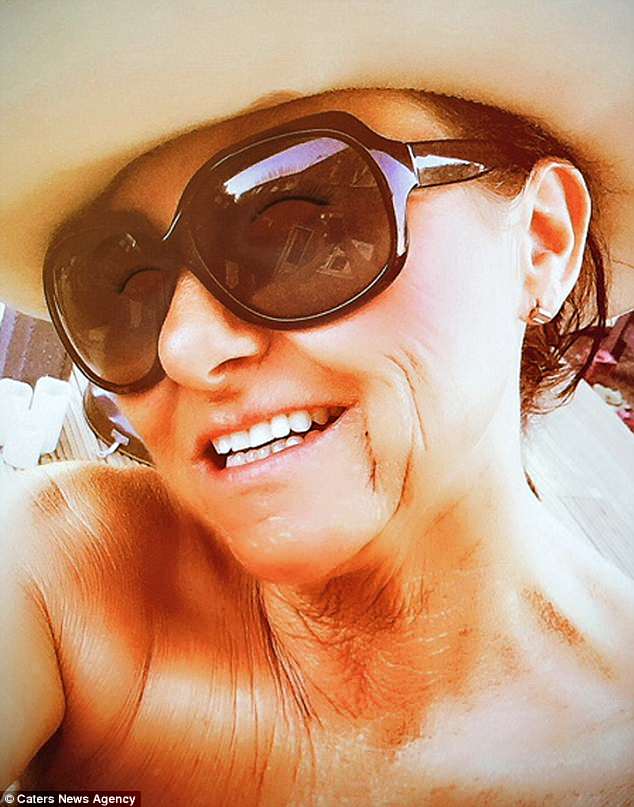 Fortunate: Sarah was diagnosed with skin cancer after an ‘eagle-eyed doctor’ spotted a blemish beneath her eye during an unrelated appointment

The Health and Safety Executive (HSE) issued advice on the health risks associated with UV tanning equipment, such as sunbeds, sunlamps and tanning booths.

They recommend you shouldn’t use UV tanning equipment if you:

Sarah explained she stopped taking life too seriously after her son Jack, 17, died in a car crash five years ago.

‘I warn others about the dangers but I don’t really take my own advice as I still go in the sun,’ she said.

‘It’s the only real way that I manage to relax and after losing Jack I know life is too short and I think to myself “what will be will be”.’

Sarah was diagnosed with skin cancer after an ‘eagle-eyed doctor’ spotted a blemish beneath her eye during an unrelated appointment.

She said: ‘He knew straight away that it was skin cancer but I just thought it was a small blemish.’

Sarah, who has a daughter Amy, 28, underwent two operations to remove the growth from beneath her eye.

She continued: ‘I’m really pleased with the scar now, the surgeon was amazing, it almost looks like I’ve had a face lift.

‘I have been warned by doctors to stay out of the sun and to wear total sun block but I can’t help myself.’

However she does use her own experience to warn friends and family about the importance of protecting their skin. 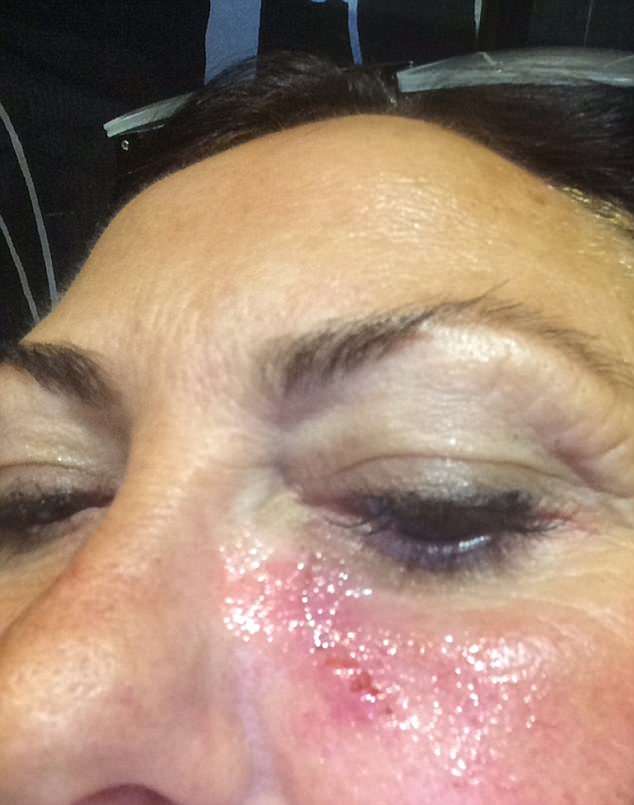 Warning: Sarah urges her friends and family to protect themselves in the sun after her diagnosis. Pictured, the cafe owner after her first operation to remove a growth

‘A lot of my friends always used the sunbeds but after my ordeal and seeing my scars they’ve stopped,’ she said.

She added: ‘My daughter, Amy isn’t a sun worshipper but I have warned her to always protect her skin while she’s young.

‘I know people may think I’m stupid for still going in the sun but it’s an addiction and I love the feeling of being tanned.’ 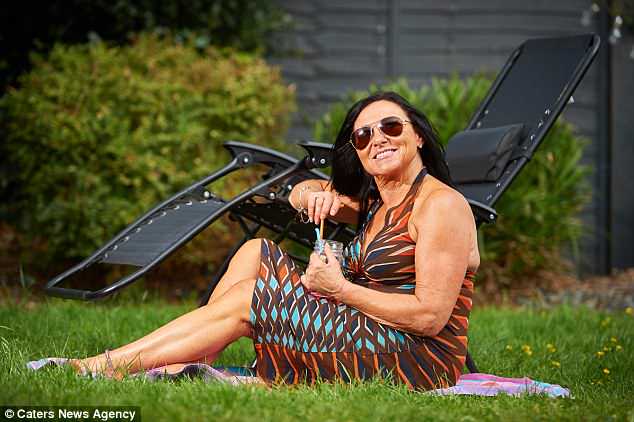 Taking precautions: Sarah now wears SPF 50 on her face and SPF 10 on her body in the sun