Former deputy Opposition leader Tanya Plibersek has been slammed by her own supporters for arguing all school children should pledge their loyalty to Australia.

Ms Plibersek took to Twitter on Saturday to share an article about her ideas ahead of her Australia Day address at the Sydney Opera House on Sunday.

The Federal Labor MP argued patriotism is about acceptance and lending a hand rather than exclusion, but was harshly criticised by users on her own side of politics.

She said the incredible spirit of generosity from Australians during the latest bushfire ravaged summer was the best example.

‘This has been patriotism at its practical best; patriotism as the thread connecting us all as Australians.’

On Sunday she will call for all school students to be taught the Australian citizenship pledge, which states: ‘From this time forward, I pledge my loyalty to Australia and its people, whose democratic beliefs I share, whose rights and liberties I respect, and whose laws I will uphold and obey.’

Ms Plibersek’s remarks quickly became trending online with many of her supporters rejecting the idea as American and old fashioned.

‘Are you just trying to lose the next election? (This is) all things I loathe about America. Going to vote in the religious bigotry bill too? Just to really break my Labor heart?’ a woman said.

‘Huge fan Tanya, but I think there are more elegant and less nationalistic ways to codify good citizenship here,’ she said.

Ms Ford then argued Labor Leader Anthony Albanese was not being a good citizen when he pledged to keep Australia Day on January 26.

Other people pointed out the pledge is already made by immigrants who become Australian citizens.

One man remarked ‘that the left are eating their own’ and remarked that the behaviour was proof they were uneducated. 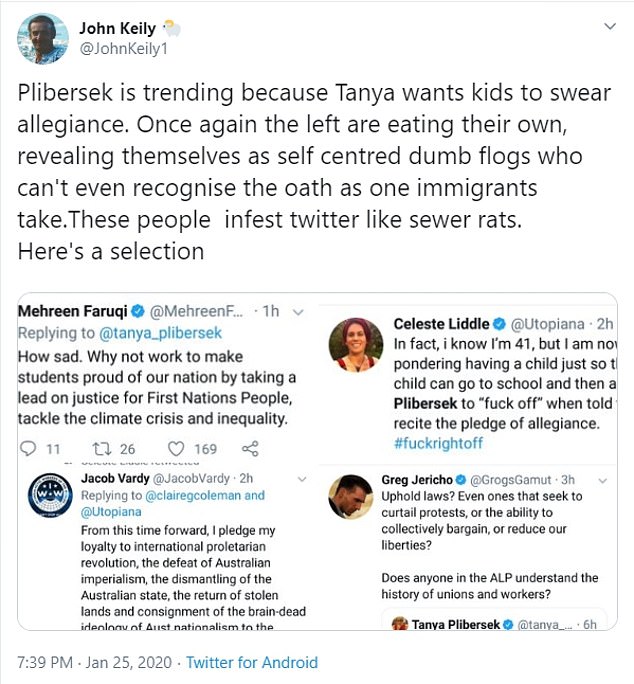