Tanya Plibersek has enjoyed a friendly meeting with Emmanuel Macron who declared Australia is ‘back’ after his public spat with Scott Morrison.

The environment minister met the French President in Lisbon, Portugal where she attended a speech he gave on the sidelines of the UN Oceans Conference on Thursday.

French-Australia relations have been frosty since Mr Morrison dumped a $90billion submarine contract with a French company last year and then leaked private texts from the President in a bid to prove he was expecting it.

Mr Macron said he was lied to and recalled his Australian ambassador to express his fury.

The new Labor government is now trying to repair relations and Thursday’s meeting appeared to show Mr Macron is ready to do that.

Tanya Plibersek has enjoyed a friendly meeting with Emmanuel Macron. She shared this selfie of the pair on Twitter afterwards

At one point in his speech, Mr Macron directly addressed Ms Plibersek and said ‘you’re back’, reported the Sydney Morning Herald.

‘We need you in the Indo-Pacific strategy and climate and oceans is part of the strategy for us,’ he added.

After the event he reportedly went up to her and clasped her hand in his.

A beaming Ms Plibersek posted a selfie with the president on Twitter and said protecting the environment was a priority for the new government in contrast to the Coalition.

‘The environment is back under the new Australian Government,’ she wrote.

‘An honour to attend a special event at the Lisbon Oceanarium with the President of France @EmmanuelMacron as his guest. Merci beaucoup!’ 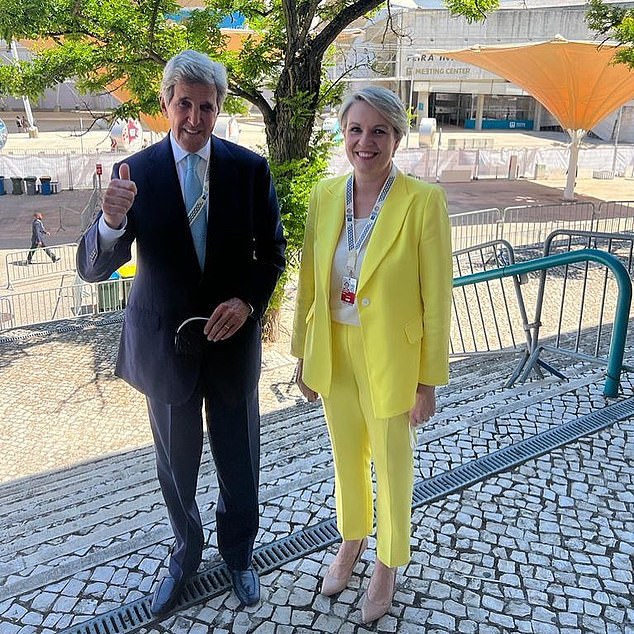 Prime Minister Anthony Albanese will have a one-on-one lunch with Mr Macron at the Elysee Palace in Paris on Friday as he attempts to revitalise France-Australia relations.

In a press conference on Thursday night he refused to say whether he would apologise to Mr Macron over the submarine fiasco.

‘I look forward to having a constructive relationship with President Macron,’ he said.

‘I’ve made it very clear what my position is about the way in which Australia engaged at a leadership level with friends.

‘What I want to do though is to make sure that we can move forward… It should be a relationship where we can rely upon each other… in which we can trust each other and mutually benefit.’

When asked if French businesses could trust him after the ‘betrayal’ and ‘deception’ over the submarine contract under the previous coalition government, Mr Albanese said ‘absolutely’.

‘Everyone should be able to trust me, that’s the way I deal with people… that’s how I got to be prime minister,’ he said. 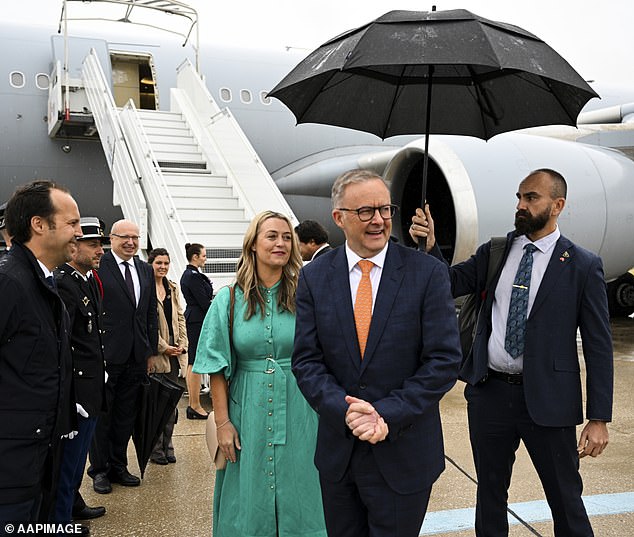 The Morrison government decided to scrap the contract with Naval Group last year in favour of nuclear-powered submarines, under the AUKUS partnership with the UK and US.

Mr Macron later told Australian journalists ‘I don’t think, I know’ when asked if he thought Mr Morrison had lied to him in his handling of the issue.

He then addressed the OECD council and was asked questions by members, including the US, about Australia’s action on climate change, Lithuania, Australia’s aid to Ukraine, Japan and international law in the Indo-Pacific.