Tara Fitzgerald on Weinstein, Requiem and enjoying her 50s

Spooky things happened during the making of the new supernatural thriller Requiem. ‘There were a lot of dead birds,’ says Tara Fitzgerald, who plays a mysterious antiques dealer called Sylvia in the six-part BBC drama. ‘They were in people’s gardens, a lot more than normal.’

A crow, the symbol of death, features in the opening sequence of Requiem. So far we’ve seen what looks like demonic possession, and a young cellist called Tilly has had to watch her mother cut her own throat, after which Tilly has begun to question everything about herself. Her journey is taking her to a remote part of Wales and a frightening-looking house that’s stirring memories.

Tara Fitzgerald says she feels more confident than she ever has. Her career is flourishing again

Other members of the cast and crew also noticed bird corpses, and they were captivated by the sight of a very unusual Moon, with a sparkling halo of ice. ‘I believe in things that are greater than us. I don’t know how to quantify them but I believe in energy,’ says Fitzgerald, when we meet at the British Film Institute in London. ‘I believe in energetic fields that can cause things to happen. I haven’t seen anything, but I’ve experienced things, felt things.’

We have seen her character, Sylvia, in glimpses in the first few episodes, but she’ll become central to the story as it reaches its climax. There is a stillness and otherness about Fitzgerald these days that was only seen in snatches in her early years as an actor, starring as ‘the pretty girlfriend’ – in her words – alongside Hugh Grant in Sirens and The Englishman Who Went Up A Hill But Came Down A Mountain, and the lead in hit comedy Brassed Off. That unearthly quality came to the fore on stage during an award-winning Ophelia alongside Ralph Fiennes as Hamlet in the Nineties, here and on Broadway.

Fitzgerald then looked like she would conquer Hollywood – and she appeared to have a powerful ally in the now-disgraced Miramax boss Harvey Weinstein, with whom she had been working. More recently she played Queen Selyse in three seasons of Game Of Thrones, saying afterwards: ‘It was a real game-changer for me. I was lucky to be a small part of it.’

Fitzgerald appears regal even when dressed in a flat cap and black boa. A little bit posh, a little bit haughty, a little bit mischievous. And, at 50, the stillness about her is powerful. Supernatural, even. ‘I was intrigued by this woman I play in Requiem, who operates independently,’ she says. ‘Sylvia is there on her own, doing her own thing. You don’t get many of those roles, ever.’ 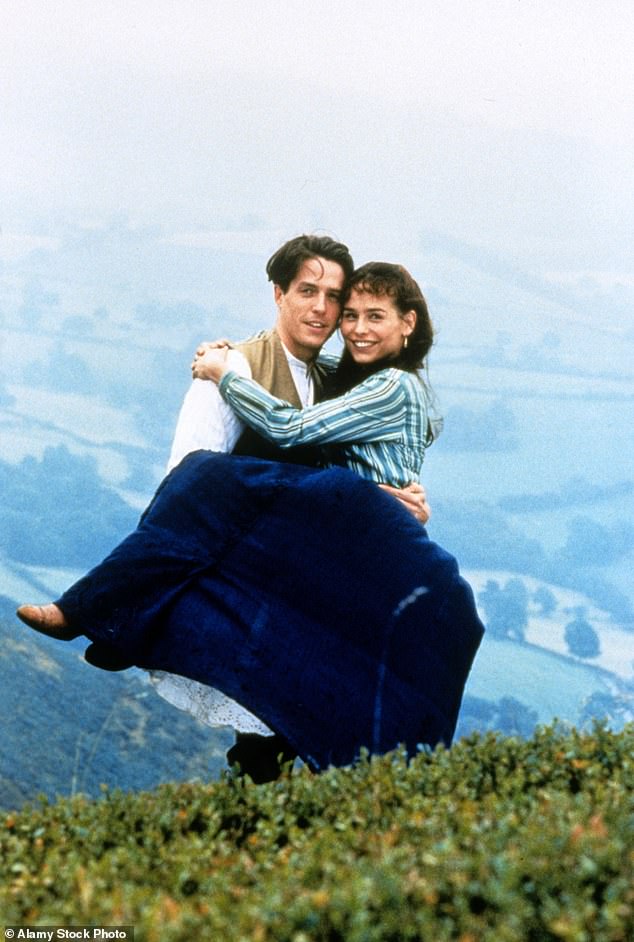 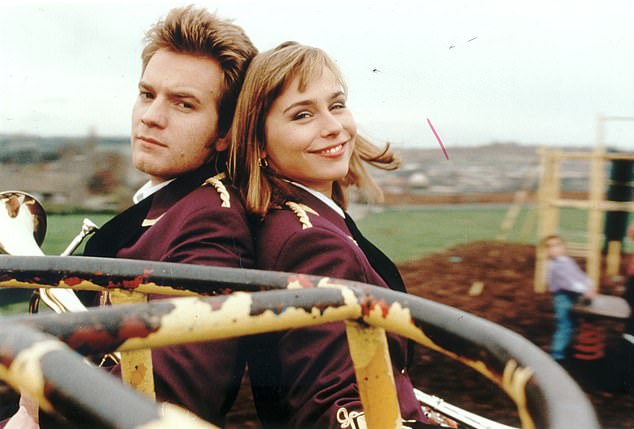 Fitzgerald with Ewan McGregor in Brassed Off, 1996. Fitzgerald chose not to decamp to Hollywood full-time, although the opportunity was there

The script by Kris Mrksa appealed to her. ‘There are clear references to horror films of the Seventies, like The Wicker Man or Rosemary’s Baby. The world of west Wales is captured properly, fascinatingly. I had a cottage in Dolgellau years ago, near where we shot, and I felt really strongly that this captured my version of deepest Wales.’

She has no family links to the country – her mother was ‘posh Irish’ and her father was an Italian from London’s East End – but she knows Wales well. ‘I fell in love with it. It’s so untouched. So wild.’ Her father died when she was 11, although she didn’t find out until the age of 19 that he had committed suicide due to depression.

‘There is that resonance with my life, but that wasn’t anything to do with me taking the role of Sylvia,’ says Fitzgerald. ‘If there’s anything I connect with, it’s what losing a parent when you’re young does to you. Your search for yourself, going out into the world. Your parents instruct you on how to do that.’

After leaving school at 16 she worked as a waitress around Europe before returning to London and training at the Drama Centre. Her career began after graduation with a part in the comedy Hear My Song. ‘I found going into the business young, in my 20s, very difficult. I didn’t feel I fitted in at any point. I didn’t feel I had the right to be there at all. I do now… more.’

Hollywood beckoned, but ‘I couldn’t live with the façade. It was lack of confidence, actually. Simply.’ Nevertheless, there was a time in her early 30s when she reportedly had Weinstein’s ear. Hollywood columnists suggested she had rescued the film of The English Patient by persuading him to read the script, for example. Fitzgerald was slated to make her debut as a director under him with a movie called The Passion, but it was never made. So what happened with Weinstein? 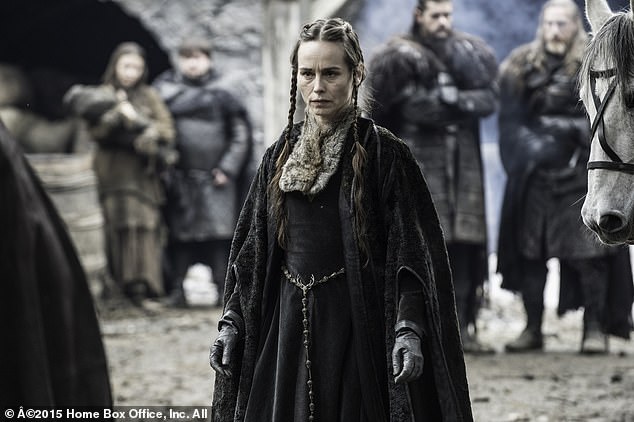 Tara Fitzgerald as Queen Selyse Baratheon in Game Of Thrones. ‘It was a real game-changer for me. I was lucky to be a small part of it’

‘Did I suffer in the way other people have suffered? No, I didn’t. I had my own experiences. I don’t really want to talk about it.’

Fitzgerald chose not to decamp to Hollywood full-time, although the opportunity was there. Now that we know what Weinstein was up to over many years, was it a case of her walking away in disgust. ‘No. No, it just didn’t happen. The Passion was my favourite book. I did quite a lot of work on it. I genuinely don’t know what happened.’

There has been a huge reaction to the Weinstein scandal. ‘It’s brilliant in many ways,’ she says. ‘It’s been vital for people to feel that they’ve got a platform that’s enabling primarily young women, but also young men, to speak.’ She hesitates. ‘What can happen is that people then turn on each other within those movements. That’s a shame because it undermines things and can end up invalidating the whole cause.’

The industry now appears to have been full of men willing to exploit young women, so I have to ask if that ever happened to her? ‘Well, it could be said for almost anybody. For myself, there needs to be some thinking time. It can be quite easy for me to ascribe certain behaviours to certain situations, but actually, is that true? It would be naive to say it was never an issue for me. There has blatantly been a problem in society; that is now being addressed. What I find difficult is that things one says might become toxic very quickly now. I am a very private person. I’m more than happy to talk about myself to a certain degree, but the moment it starts impacting on other people, it gets difficult.’

She is, however, glad that female writers, directors and actors are being taken more seriously and paid equally she says, but is there also a hunger for punishment – in terms of men being exiled from the industry or even prosecuted? ‘Yes. I’m certainly for justice. I’m certainly for clarity around things – while also understanding the vitriol that can be unleashed.’ 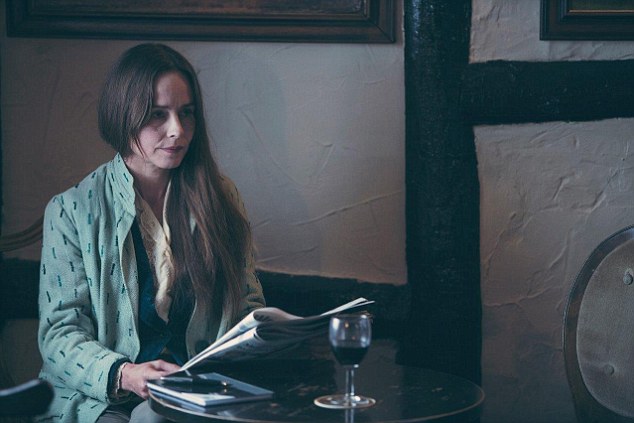 Like her mysterious character Sylvia in Requiem, Tara Fitzgerald is at ease with herself now, come what may

As for herself, Fitzgerald says she feels more confident than she ever has. Her career is also flourishing again. ‘I’ve fallen back in love with the acting, as I’ve had some crackers to play. Being 50 is much better than I thought. I prefer being this age. I’ve enjoyed my 40s and 50s far more than my 20s and 30s. Psychologically, I find it less challenging, less hard.’

She seems to have struggled for a long time to feel like she really belongs anywhere. When did it finally happen? ‘Only recently have I shaken this off and thought, “Stuff it!” There are so many other things I could be worrying about.’

Like her mysterious character Sylvia in Requiem, she is at ease with herself now, come what may. She looks up from under her flat cap and smiles. ‘I’m looking forward to the next thing.’

‘Requiem’ is on Fridays on BBC1, 9pm. The whole six-part series is available on BBC iPlayer