Taraji P. Henson stays dry by keeping a large umbrella with her while attending a fashion show

Taraji P. Henson stays dry by keeping a large umbrella with her while attending the Moschino SS22 show during New York Fashion Week

The 50-year-old actress was seen making her way to the event’s area and posed for a few glammed-up shots while preparing to watch various models make their way down the runway.

The performer’s appearance at the event comes not long after she took to her Instagram account to show off her own sense of style.

Henson wore a sleeveless leather biker jacket that exposed her left arm while spending time at the show.

The Empire star beautifully contrasted her top with half of a bright yellow sleeved dress that was tied around her waist and covered her right side.

The performer also wore a set of boots that rose above her kneecaps and paired perfectly with her jacket.

Much of her gorgeous dark brunette hair was notably combed over to the right side of her head, while the rest fell down towards the nape of her neck. 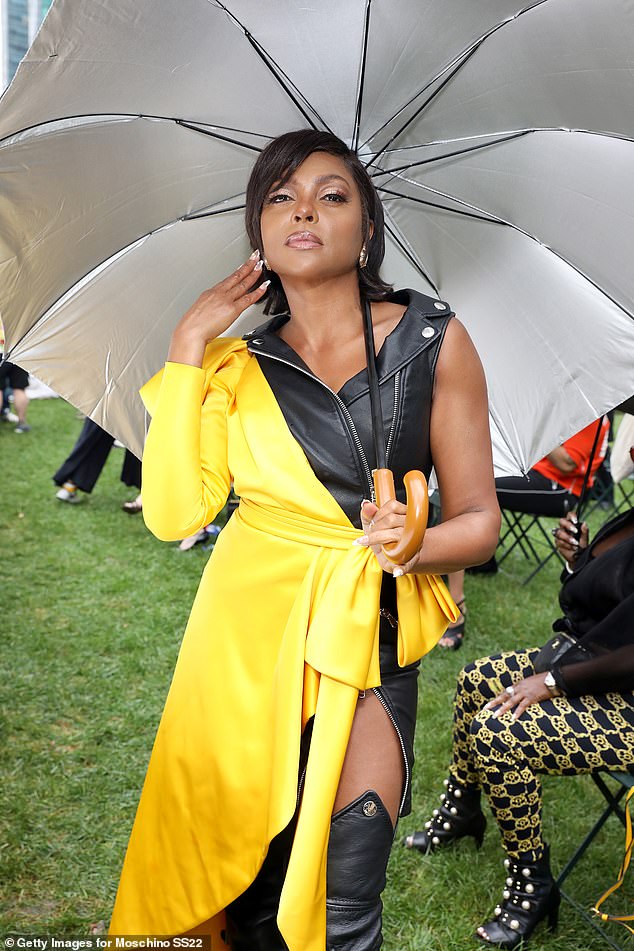 Both ways: The performer sported a leather biker jacket worn underneath half of a yellow dress 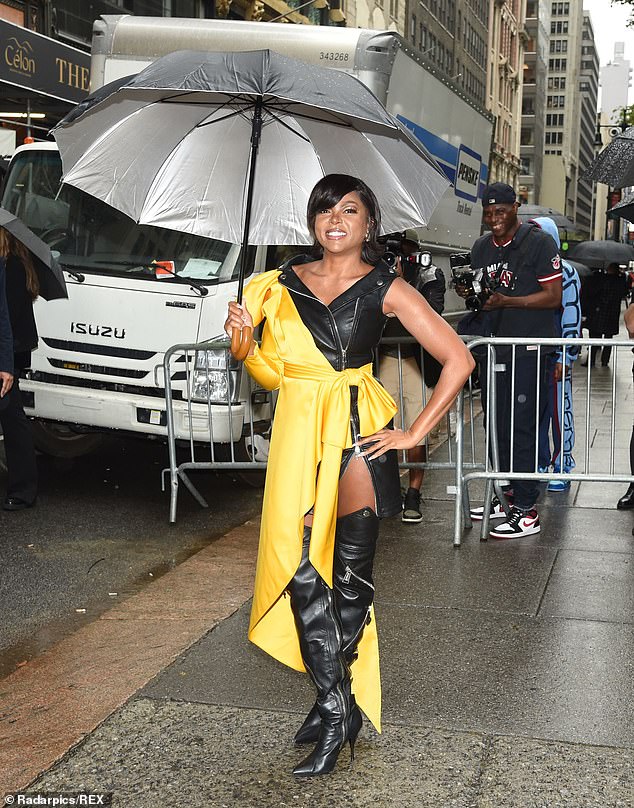 Pairing well: The actress also wore a set of heeled leather boots that paired perfectly with her stylish top

She added a little bit of metallic shine to her outfit with a pair of hoop earrings.

Henson also carried a large umbrella to keep herself protected from the downpour while watching the show.

The performer also sent a shout-out to Moschino’s creative director, Jeremy Scott, in one of her clips. 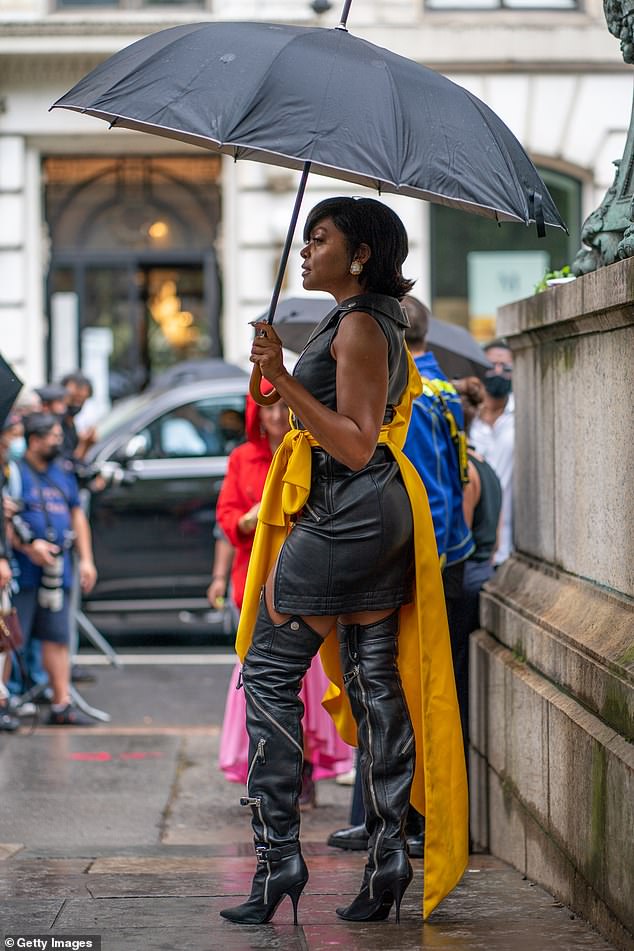 Staying dry: Henson carried an umbrella with her to keep her protected from the downpour 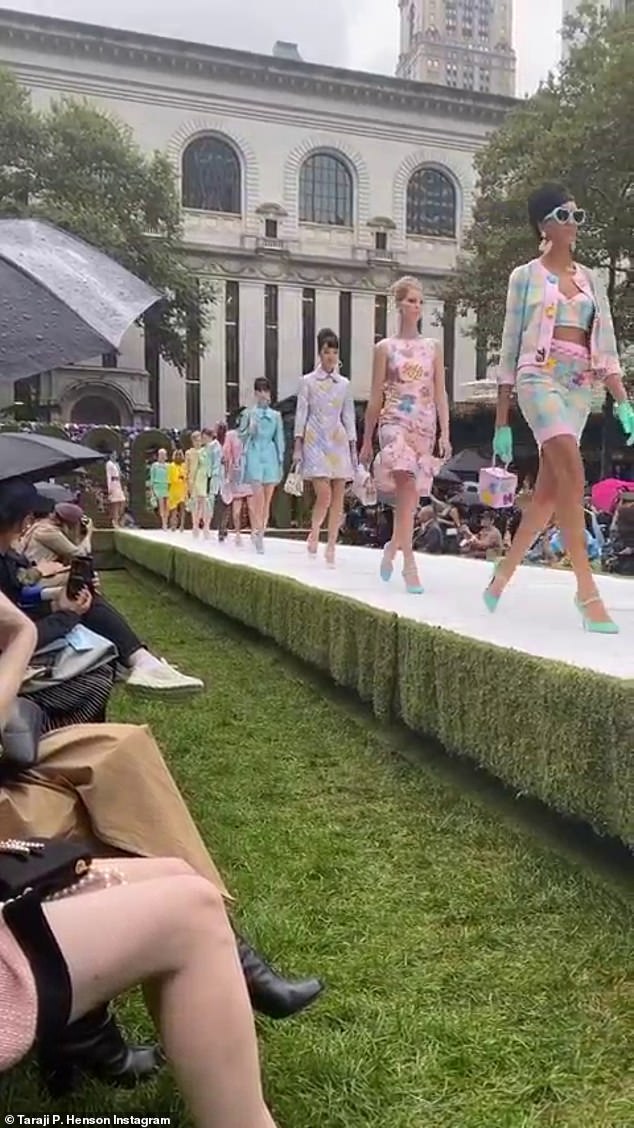 An inside look: The performer shared several snaps of models strutting the runway during the Moschino show

The actress also wrote a brief message that partially read: ‘Last night moving through these NY skreets!!!! How I have missed the big apple!!!’

In the shots, the Proud Mary actress was seen wearing a beautifully patterned Versace dress that featured a large slit running up its middle portion.

The performer paired her outfit with a set of green Gucci high-heeled shoes that complimented the shade of her dress. 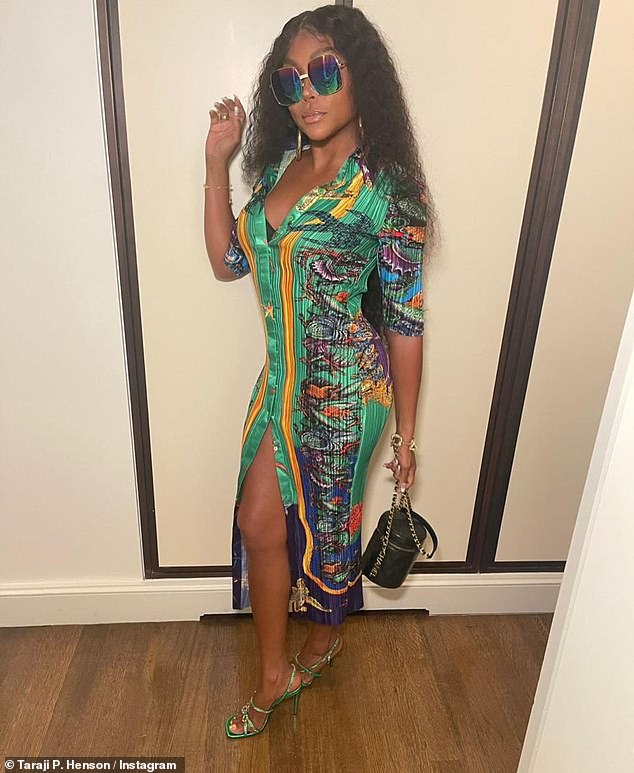 Showing off: Henson shared a duo of stylish snaps to her Instagram account prior to attending the event

Henson’s beautiful locks remained free-flowing and fell onto her shoulders in the snaps.

She also sported numerous articles of jewelry and wore a set of multicolored sunglasses that paired well with her dress.

The actress also carried a small leather Chanel bag as she posed for the snaps. 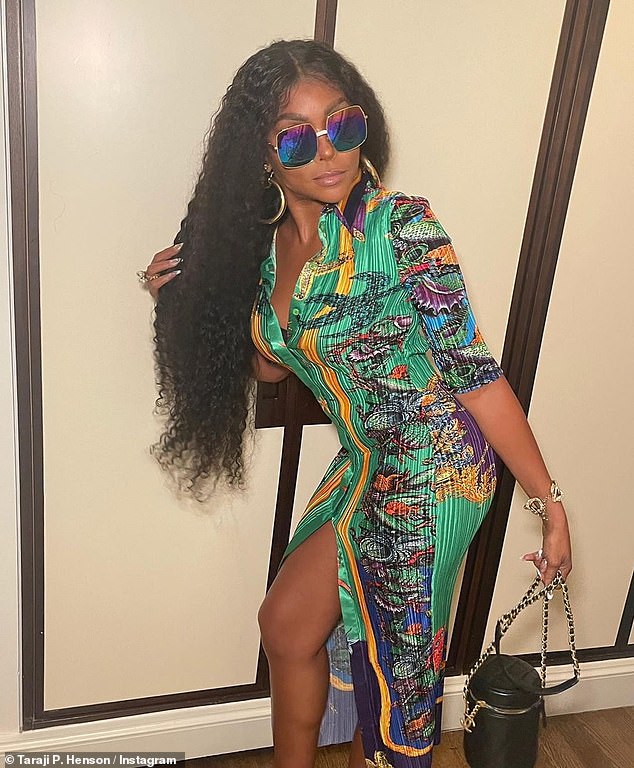 Stylish star: In the snaps, the performer sported a vibrantly colored dress that exposed a slight portion of her toned legs