One of the UK’s most famous art institutions is recruiting for a Head of Coffee to work at its London gallery, paying the skilled barista £12,541 more than a curator.

The role is advertised on the Tate’s official careers page and states that its Millbank gallery is recruiting for the £39,500-a-year role.

It is described as a ‘unique role that encompasses all aspects of coffee’ across the Tate galleries.

Ironically the role advertised directly underneath it is for an Assistant Exhibitions Registrar, who would work on the curatorial team.

The advertisement for the Head of Coffee role is pictured above, where it states the employee would be paid £39,500

The role is advertised at £26,959 per annum and the employee would be responsible for the ‘transport and insurance of temporary loans to Tate Britain’s displays programme’.

Both roles would require the employees to work in central London at Tate Britain, which sits on the bank of the River Thames.

Requirements for the role on the curatorial team include either a degree in Art History or Fine Art.

It also states someone with the ‘equivalent experience, knowledge and understanding of this field’ would also be considered for the role. 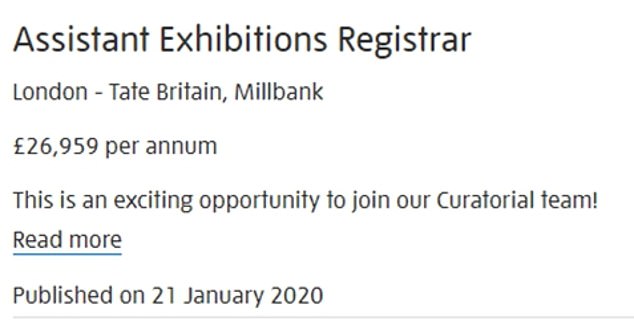 Candidates are also required to have a knowledge of international museum standards regarding the transport of fine art.

The gallery looks after a range of pieces from artists from across the world and last year was home to some of the most famous Van Gogh pieces.

Pieces from the artist have previously been sold for more than £60 million, and the curator would be responsible for making sure various pieces were packaged correctly to be transported.

The candidate would also need ‘excellent’ written and verbal communication skills as well as internal and external contacts.

A high degree of computer literacy is also required for the role, as well as the ability to deal with figures and budget planning.

This is while to apply for the role of Head of Coffee, you would need ‘experience and contacts in the coffee industry’ as well as ‘extensive experience of cupping and espresso quality assessment.’

Other requirements state the candidate would need a successful track record of business development, sales and strategy, as well as experience in developing blends for espresso and filter coffee.

It does seem however that the role would be extremely varied, as the candidate also needs to have a proven track record in training people as well as experience in financial management.

In a statement to the MailOnline, a spokesperson for the Tate said: ‘It’s unfair to compare a head of department with a curatorial role of a different level.

‘All Tate’s departments have a variety of roles with different responsibilities and salaries, including curatorial, and a more accurate comparison would be a curatorial team leader. We value all our staff and strive to pay them appropriately for their work at Tate.’