Savers will be able to save tax-free to the tune of £20,000 from April 2017, George Osborne announced in his Budget today.

At present, savers can stash away £15,240 in Isas shielded from the taxman, with a new limit coming into effect each April. This can be held in a combination of both cash and stocks and shares.

The move comes with the introduction of the new personal savings allowance, which comes into play next month. It formed the centrepiece of his Budget last year.

This change means millions of savers will be able to take their interest tax free on standard savings accounts and current accounts – up to £1,000 for basic-rate taxpayers and £500 for higher-rate taxpayers.

Some experts said this could cause the death of the cash Isa, a savings product which has proved popular since its introduction in 1999.

The numbers opening accounts have rocketed from 4.5million on launch to more than 10million last year. As much as £266billion has been ploughed into these accounts.

George Osborne tripled the amount that could be saved in them from July 2014. 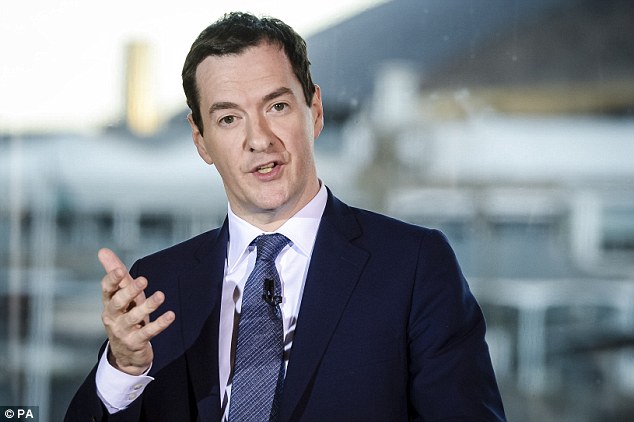 George Osborne: Says he wants to help savers at a time of low interest rates

In the past year, the big banks have slashed Isa rates by up to 40 per cent for new savers as the deals have lost their marketing appeal.

Rates have crashed so far that the returns are now lower than on taxable fixed-rate bonds and easy-access accounts.

Once the darling of the savings industry, Isas were used by big banks to woo savers into putting cash into savings before the end of the tax year every April.

Traditionally banks and building societies edge up rates on Isas in the months leading up to this time of year to entice savers looking to use their allowance. But this year has seen the exact opposite – cuts.

This Isa limit rise is likely to entice more savers into keeping cash in them – especially those who have maxed out the yearly limit and could have interest higher than the amounts capped with the personal savings allowance.

Gareth Shaw, head of consumer affairs at Saga Investment Services, said: ‘Savers will be rejoicing with the changes to the Isa regime – a huge boost to tax-free savings and giving people flexibility to access their lifetime savings for whatever they want.

‘This is the kind of environment that will drive people to save more money.

He added: ‘Isas are now an integral part of retirement planning. More than 12million over-50s currently hold one, and value the benefits that these tax-efficient savings accounts can bring to their retirement finances.

‘The Government has so far done a great job in “souping-up” the Isa with an increased allowance, greater flexibility and better death benefits. This latest step should mean that Isas become the must-have financial product for all.’

The limit rise for Isas comes as the Chancellor also announced a new Lifetime Isa, which will allow under 40s to save £4,000 each year and receive a 25 per cent bonus on savings from the Government each year.

Anyone with a Lifetime Isa will be able to get a bonus on contributions made until they are 50. Those who open a Lifetime Isa can also hold a regular Isa.