Taxi driver Albert Xhediku, who died after suffering an electric shock while playing football on an artificial 3G pitch

A taxi driver who was playing football with friends was electrocuted by a faulty floodlight which had been repaired with sellotape as he tried to retrieve a ball he kicked over a fence, an inquest heard today.

Albert Xhediku, 34, screamed in agony and suffered a seizure after coming into contact with the floodlight’s mast while climbing back over the 12ft fence.

An inquest heard today that Liverpool and Barcelona fan Mr Xhediku had offered to fetch the ball moments before as it was ‘his turn’.

The hearing, the start of an eight-day jury inquest into his death, was told he and his friends were playing five-a-side after booking a 3G artificial football pitch on the evening of January 17, 2016.

During the course of the game Mr Xhediku accidentally kicked the ball over the fence and went to retrieve it. As he climbed back, however, he suffered a fatal electric shock.

Mr Xhediku’s friends rushed to his aid at Mountbatten leisure centre in Portsmouth, Hampshire, after hearing his screams and desperately helped him from the fence.

However, he had stopped breathing and never regained consciousness. 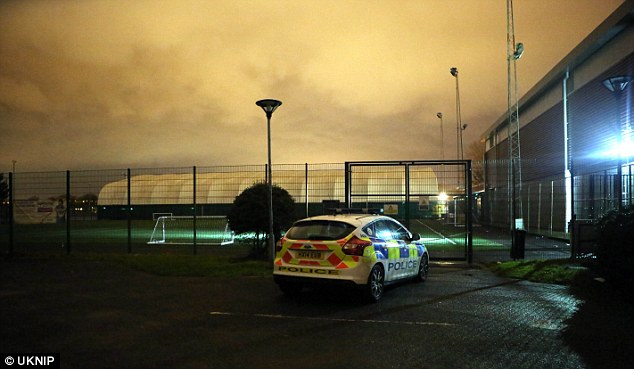 Emergency services were called to the Mountbatten Leisure Centre in Portsmouth, pictured, after Mr Xhedi. The inquest heard that the floodlight was faulty and ‘had not been monitored frequently’ 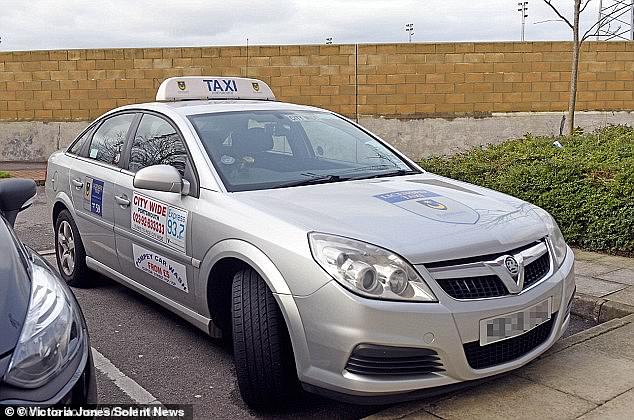 The inquest heard the control box for the floodlights ‘had not been monitored frequently’, and had recently been temporarily fixed with sellotape.

The tragedy sparked a three-year probe by the Health and Safety Executive (HSE) and Portsmouth Coroner’s Court heard today there had been multiple reports of minor electric shocks by the floodlight.

HSE inspector Michelle Canning today told the hearing: ‘Albert and his friends were playing on an all weather pitch surrounded by a 12ft fence.

‘The ball went over the fence and Albert went to collect it.

‘When he was climbing back over the fence he made contact with a floodlight pylon adjacent with the fence.

‘He screamed and went into a seizure as he suffered an electric shock.

‘His friends helped him from the fence but he had stopped breathing.

‘He never regained consciousness. He was taken to hospital where he was pronounced dead.’

She added: ‘There was a control box at the bottom of the floodlight, which other players from Albert’s friends said had previously suffered minor electric shocks from. 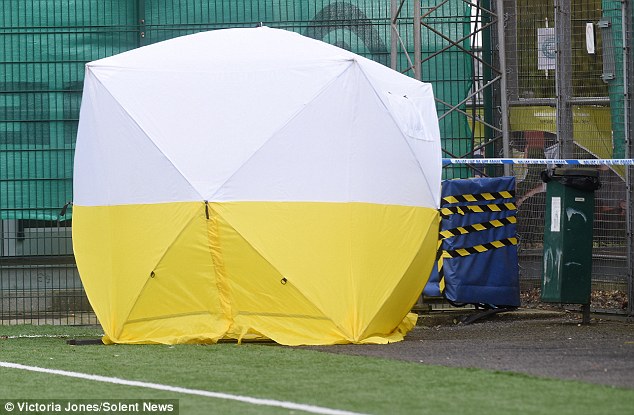 Police erected a forensic tent on the artificial pitch, where the man was electrocuted. The tragedy sparked a three-year probe by the Health and Safety Executive

‘The control box had sustained some damage and had been fixed with sellotape.

‘One of the masts for the floodlight was also partially damaged because of the weather – it had been blown around in the wind.’

Assistant coroner Lincoln Brookes said Albanian Mr Xhediku, who worked for City Wide Taxis in Portsmouth, had kicked the ball over the fence at Mountbatten Centre.

Mr Brookes, giving a brief overview to jurors ahead of the opening, said: ‘It was his turn to collect the ball, and he climbed over a locked fence.

‘As he was climbing back over the fence, he touched the mast on a floodlight which gave him a fatal electric shock.’ 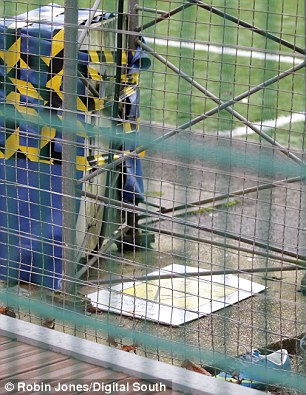 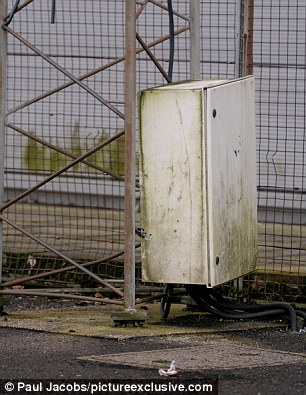 A lone trainer was left beside the floodlight. Pictured right is the junction box on one of the other floodlights around the pitch

He added: ‘Normally floodlight posts don’t electrocute but in this case it did.’

At the time of his death, an investigation was launched by Parkwood Community Leisure, which operates, Mountbatten Centre.

Mr Xhediku, from Portsmouth, was given CPR by paramedics but later pronounced dead at the nearby Queen Alexandra Hospital.

The jury heard that off-duty police officer Simon Tabb had been playing football at the leisure centre a couple of weeks before Mr Xhediku’s death, and also received a ‘nasty shock’. 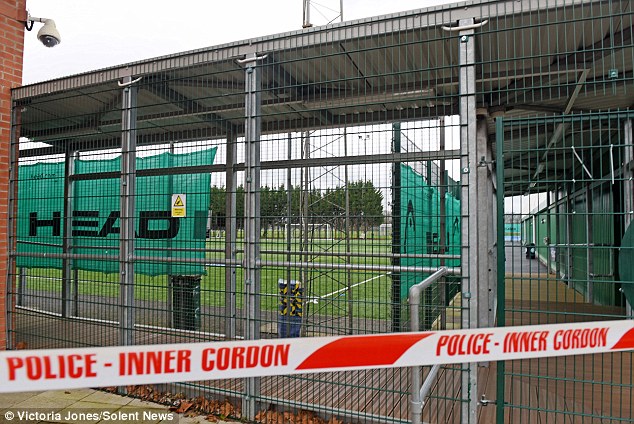 A third man revealed after Mr Xhediku’s death that he too had been electrocuted just weeks before, but did not report it to the leisure centre at the time

He too had been trying to retrieve a ball, but his incident was not fatal.

Mr Brookes said: ‘We will be hearing more about what, if any, response that generated from the management.’

A third man revealed after Mr Xhediku’s death that he too had been electrocuted just weeks before, but did not report it to the leisure centre at the time.