The Government is planning to subsidise electronic bicycles for pensioners and commuters as part of plans to massively increase cycling through a £2billion anti-obesity drive.

The e-bikes are like regular bikes but have a small motor usually hidden in the frame to aid travel uphill or on longer journeys.

Ministers hope the programme will help those who are less fit or older to get back in the saddle.

They could be given up to a third off the £600 – £3,000 cost of a new machine to entice them to take more exercise or leave the car at home.

It comes as Mr Johnson prepared to unveil a £2billion campaign to get fat Britain ‘on its bike’.

Bicycles will be prescribed by doctors for patients and all Britons will be offered free training on how to ride. 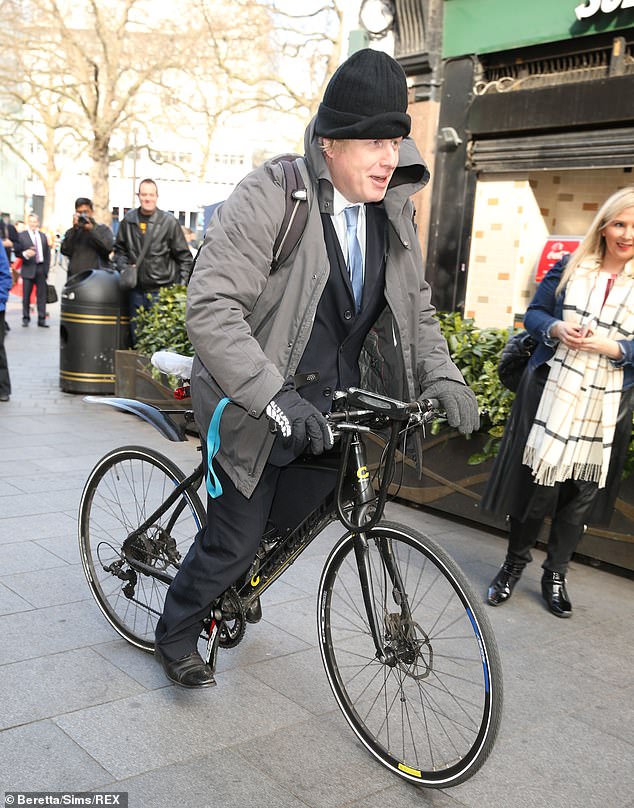 Boris Johnson is pictured riding a bicycle on the streets of London, Britain on 24 March, 2015

The end of the rat-run? Locals given more control over traffic routes

Local residents could be given more powers to make their streets safe for cyclists – including shutting off rat-runs – under Boris Johnson’s new cycle plan.

Councils will also be prevented from installing poor-quality cycle lanes with the creation of a new body, Active Travel England, designed to be like an Ofsted for cycling and walking.

It will refuse to allow paint-only cycle routes without physical barriers between bikes and motorised traffic. Shared cycle and pedestrian areas will also be vetoed.

The subsidy for e-bikes comes on top of the Cycle To Work scheme which already gives money off purchases of cycles used to get to work, the Times reported.

Boris Johnson announced that GPs in obesity hotspots will be encouraged to prescribe cycling, with patients able to access bikes through their local surgery.

Thousands of miles of new protected bike lanes and free cycle training for any child or adult will be offered under the Government’s ‘biggest and boldest plans’ to boost active travel.

The creation of the UK’s first zero-emission transport city and a dozen ‘mini-Holland’ schemes – which prioritise cycling and walking – will also form part of the revolution.

Cyclists will be able to get £50 vouchers towards bike repairs from midnight tonight.

Last night cycling charities welcomed the plans, which they say will ‘radically improve the quality of walking and cycling infrastructure’ in the UK.

Ministers hope the new measures will get people active and reduce pollution in towns and cities in a double boost to health.

Unveiling the plans, Mr Johnson said it was time to ‘shift gears’ to boost active travel.

He stressed: ‘From helping people get fit and healthy – and lowering their risk of illness – to improving air quality and cutting congestion, cycling and walking have a huge role to play in tackling some of the biggest health and environmental challenges that we face. 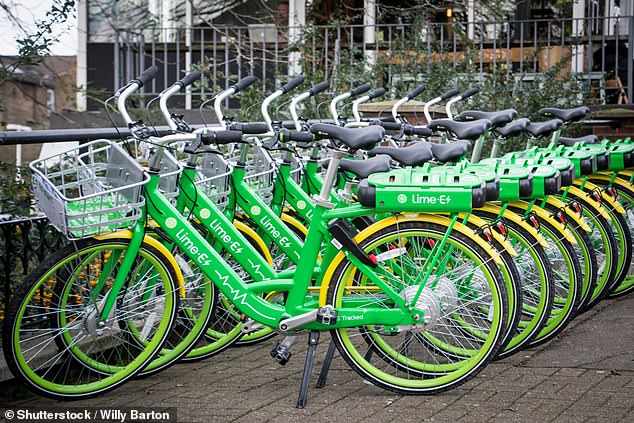 ‘But to build a healthier, more active nation, we need the right infrastructure, training and support in place to give people the confidence to travel on two wheels.

That’s why now is the time to shift gears and press ahead with our biggest and boldest plans yet to boost active travel – so that everyone can feel the transformative benefits of cycling.’

Today’s announcement comes a day after the Government launched its new obesity strategy to tackle the nation’s bulging waistlines.

Officials are looking to seize on the surge in popularity for cycling during lockdown, which saw an almost doubling of those getting on the saddle.

The scheme will see more bike racks at rail and bus stations to encourage more people to commute to work. 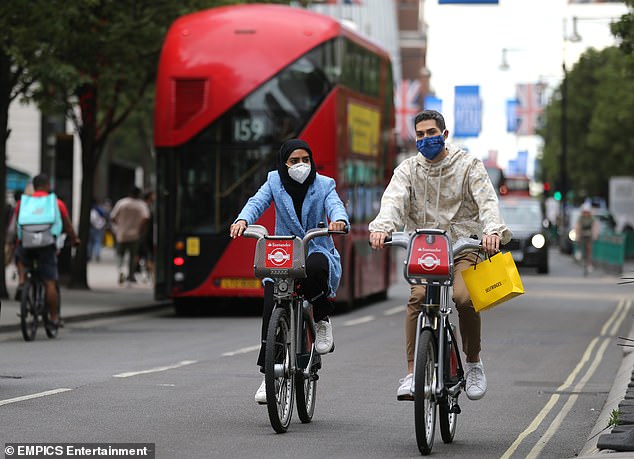 Shoppers cycle on Santander bikes on Oxford Street, London, as non-essential shops in England open their doors to customers for the first time since coronavirus lockdown restrictions were imposed in March 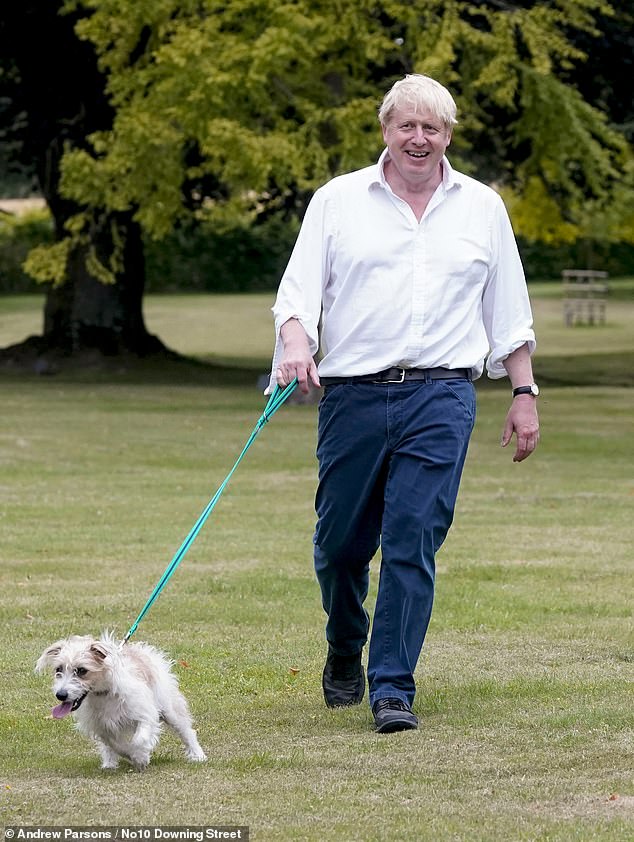 Transport Secretary Grant Shapps described it as a ‘once in a lifetime opportunity to create a shift in attitudes’ to make cycling or walking part of daily routines.

He added: ‘The measures we’ve set out today in this revolutionary plan will do just that. No matter your age, how far you’re travelling or your current confidence on a bike, there are plans to help and support you.’

An initial 50,000 Fix Your Bike vouchers will be made available online shortly before midnight tonight on a first come, first served basis.

Those who obtain a voucher – at https://fixyourbikevoucherscheme.est.org.uk – will be able to save £50 on the cost of repairing a bike at participating shops.

The Government said the vouchers are being released in batches to help manage capacity and for the scheme to be monitored before being rolled out more widely.

Halfords has said it has thousands of slots available each day for customers to bring their bicycles into stores to identify potential faults which could be rectified under the scheme.

Chief executive Graham Stapleton said: ‘We think the Government’s Fix Your Bike voucher scheme will not only help individuals become more confident about keeping their bikes maintained, but will help speed up the cycling revolution.’

Official figures indicate there has been a surge in cycling during the pandemic, with bike usage nearly doubling.

Previous statistics showed that around six per cent of Britons over the age of 16 – 2.8million – ride a bike at least once a week.

Xavier Brice, of the walking and cycling charity Sustrans, said today’s announcement ‘marks a big step forward’. He added: ‘By helping more people to leave the car at home for shorter journeys, this package of measures will cut pollution, tackle the causes of poor health and improve the safety of our streets.’

It is unclear so far where the first zero-emission city will be.

This hybrid electric bike is intended for both commutes and leisurely rides, and comes with mudguards, a pannier rack and a kickstand. It has seven-speed Shimano gearing and comes in either a low step or crossbar frame. 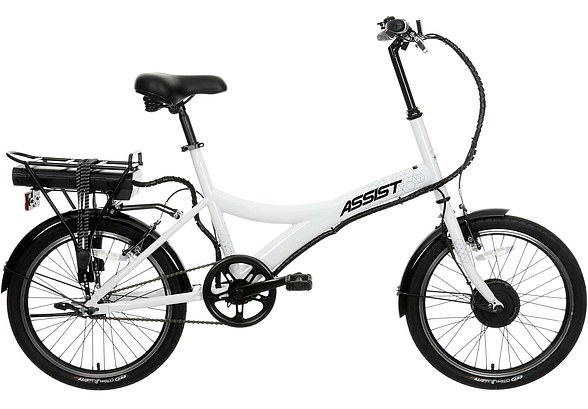 This hybrid bike is billed as the ‘perfect commuting companion’ and has a 12 -point pick up, making the motor more sensitive to the pedals. It also has a walking mode to help riders push it up a path or if it is loaded with shopping. 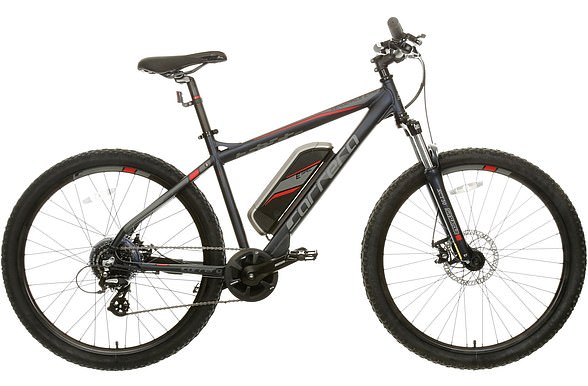 This men’s bike has a 317Wh battery giving a 40-mile range, while the Suntour Eco rear hub motor can provide speeds of up to 15.5mph. It has a lightweight alloy frame and Tektro Mechanical Disc Brakes with 180mm rotors. 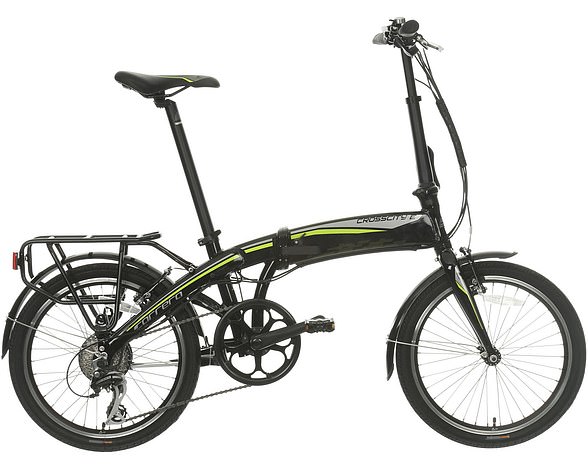 This folding bike’s 313Wh battery gives up to 30 miles of power on one charge, with the battery integrated into the bike. It also has a kick stand, mudguards and rear carrier, plus eight-speed Shimano Acera gears and V-brakes. 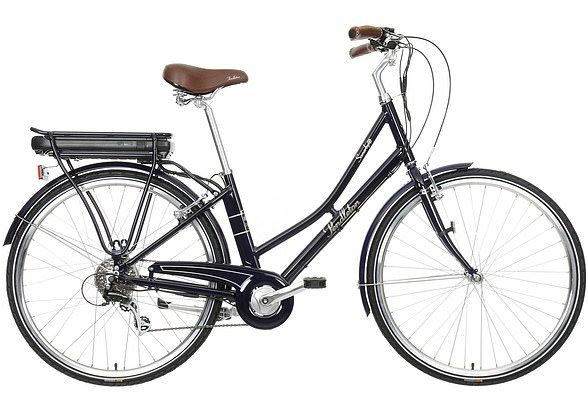 The 317Wh Samsung battery gives a range of 50 miles to this bike, which comes with a rear Bafang hub motor with speed sensor. It has eight-speed Shimano gears, built in mudguards and chainguard and Tektro alloy V-brakes. 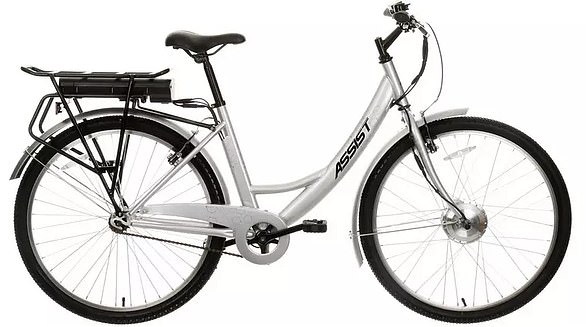 This bike features a 209Wh battery, providing up to 20 miles of range from one five-hour charge. It is best for shorter leisurely rides or commutes, with a front electric motor. With speeds of up to 15.5mph, it also has a rear pannier rack.

BISCUITS, cakes and chocolate could be hit with a sugar tax if the industry does not make them healthier, the Government warned yesterday.

Ministers said they did not rule out extending a levy already imposed on soft drink makers to other high-calorie food and drinks.

But the long-awaited obesity strategy , released yesterday, vowed further action if the current reduction programme on sugar, calories and salt fails to get results.

Launching the drive, the Prime Minister insisted ministers will not be ‘excessively bossy or nannying’.

Measures include an end to ‘buy one get one free’ deals on unhealthy foods and restrictions on where they are placed in stores.

There will also be a ban on junk food advertising on TV and online before 9pm.

Calorie labelling will be on all menus in restaurants, cafes and takeaways with more than 250 employees.

And a consultation on calorie labelling for alcoholic drinks sold in shops, pubs and restaurants will be held.

As part of the strategy, family doctors will be trained as ‘healthy weight coaches’ and paid to refer patients to weight loss groups.

There will also be a national campaign by Public Health England to help people eat more healthily.

Experts hope the measures will reduce one of the biggest health crises facing the UK and reduce the annual £6billion bill caused by obesity-related illnesses.

Two-thirds of adults in the UK are either overweight or obese, while one in three children are carrying excess pounds by the time they leave primary school.

The Government believes the greater threat of coronavirus to the overweight will motivate the public.

But the National Obesity Forum yesterday said failure to extend the levy was a ‘missed opportunity’ for ministers. And health campaigners said industry must take more responsibility after failing to cut sugar in common foods by a fifth by 2020.

Tim Rycroft, chief operating officer at the Food and Drink Federation, said the Government’s ambition for a healthier population was right.

But he added: ‘It is also time it put real money behind targeted measures to help those most afflicted by obesity, rather than relying on headline-chasing measures.’