It seems the taxpayer will continue to pay Prince Harry and Meghan’s £7.6million-a-year security bill, even though the couple have dropped their HRH titles.

Meghan’s team including a personal protection officer accompany her in London. Security costs the taxpayer in excess of an estimated £100 million a year for the royal family

The statement read: ‘Buckingham Palace does not comment on the details of security arrangements.

‘There are well-established independent processes to determine the need for publicly-funded security.’

Now a security expert has warned it could cost as much as £7.6million annually.

Canadian President Justin Trudeau has assured the Queen that the family will be safe while in his country, with Canada expected to pay around half of an estimated £1million ($1.3million) annual bill – a figure based on the cost of the Duke and Duchess of Sussex’s current UK security bill.

His comments come as The Globe and Mail also, in a scathing editorial, slammed the Royal couple of thinking they could split their time between the countries. 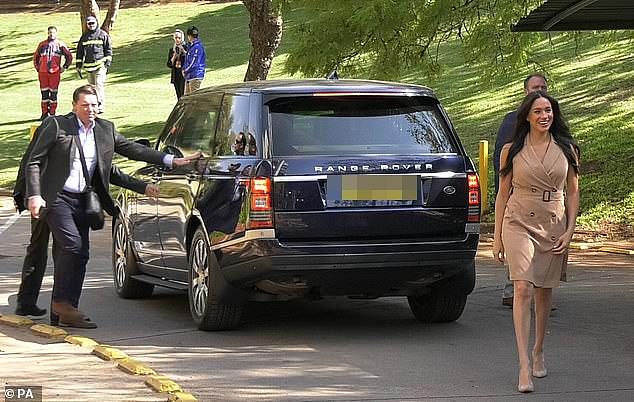 It said: ‘Canada is not a halfway house for anyone looking to get out of Britain while remaining a royal.’

There is an ongoing Whitehall review into who gets armed protection from the Metropolitan Police, with the threat assessment judged by the Royal and VIP Executive Committee led by independent retired official Sir Richard Mottram.

Sources have told The Mail on Sunday that Security Minister Brandon Lewis and Home Secretary Priti Patel have stressed the importance of continued – if reduced – protection for the pair. 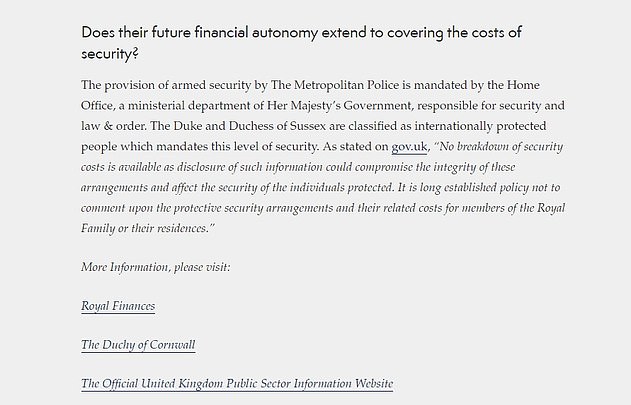 Yet the couple may have their security downgraded with protection squad officers armed only with tasers instead of guns.

The ‘range of possibilities’ have been drawn up by royal courtiers and government officials for the Queen, William, Charles and Harry to review.

The Sussexes will be told their protection team is likely to be scaled back if they take part in fewer Royal events.

The security level for Royals is increased due to the fact that their engagements are published in advance, leading to a greater threat.

However it is understood that the Metropolitan Police is keen to see the number of Royals and Ministers receiving the protection scaled back due to concerns about the spiralling security budget.

Nearly three quarters of Canadians do not want to pay for Prince Harry and Meghan’s move to the country or to pay for their security arrangements, a new poll has found.