AFLW star Tayla Harris showed up a host of male stars before paying a moving tribute to Danny Frawley ahead of the AFL Grand Final.

A few hours before the first bounce, star footy players took to the banks of the Yarra River for the annual longest kick competition.

The event was previously hosted by the St Kilda champion, who died in a single car crash three weeks ago, and Hawthorn great Jason Dunstall.

Harris went into the event with Frawley on her mind.

‘Won’t be the same without Spud today but will be sure to roost a torp [torpedo kick] for him in the  longest kick at 10:30am today,’ she tweeted.

And ‘roost a torp’ Harris did. 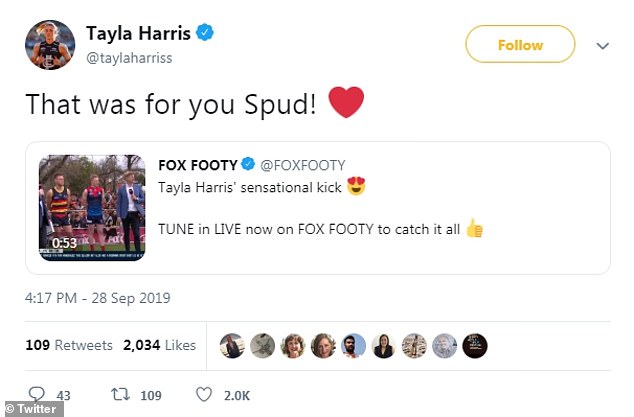 Harris used Grand Final day to pay tribute to the late football legend, ‘That was for you Spud,’ Harris posted to her Twitter along with a short clip showing her monster kick.

Harris, 22, showed up many of her male counterparts when she kicked the ball 61.5 metres across the river. West Coast Eagles star Josh Kennedy looked on in disbelief at Harris’ punt.

‘That was for you Spud,’ Harris posted on Twitter along with a short clip showing her monster kick.

Twitter users were quick to respond to the heartfelt tribute.

‘He would have absolutely loved that, imagine his reaction, it would have been priceless. A huge loss, and not only to the footy world,’ one fan responded.

‘Fantastic mark of respect to dedicate your kick to Spud. He would be proud,’ another added. 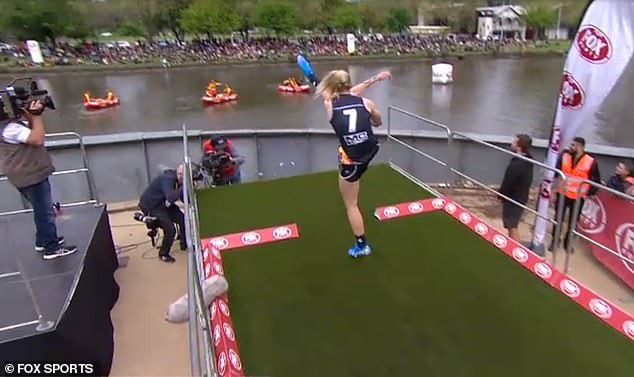 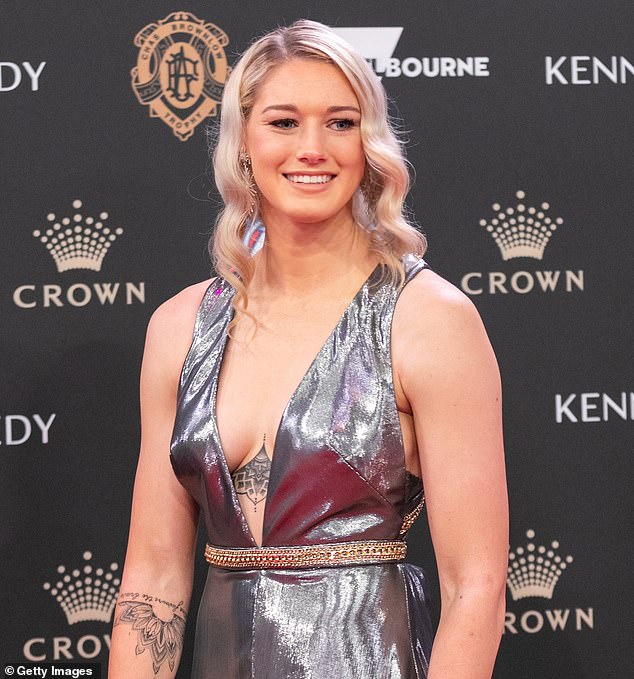 AFL’s big names took to the banks of the Yarra River for the annual longest king competition, where Tayla Harris came in third with a 61.5m punt 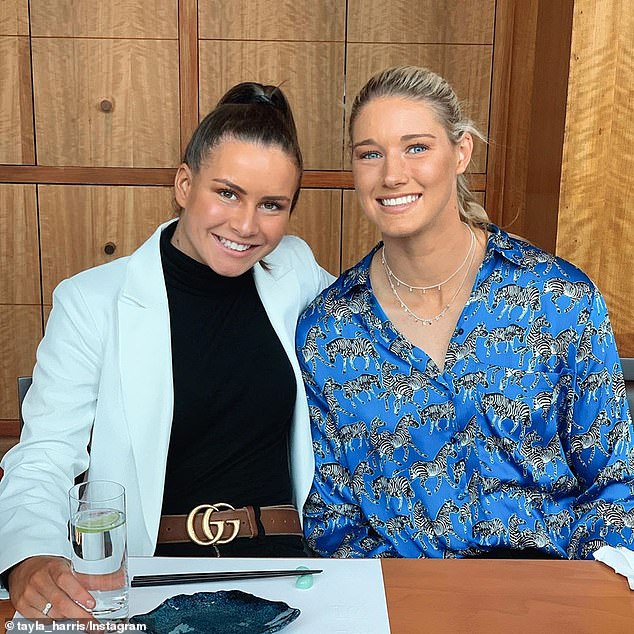 Frawley had hosted the annual longest kick competition for a number of years before his tragic death earlier this month.

Harris finished third in the contest behind Melbourne’s Clayton Oliver who kicked a 66.8 metres torpedo and Adelaide’s Brodie Smith at 66 metres.

‘Do you know what the best thing about that kick is? Right now there’s another 10 blokes going “oh my god, we’re in trouble”,’ Dunstall said.

An image of Harris captured in a match against the Western Bulldogs, garnered so many offensive comments from trolls on social media that 7AFL removed its post in January.

The photo became iconic after she was trolled on the internet for the angle of the photo in an incident that brought the topic of sexism in sport into focus.

Earlier this month, Harris’ famous airborne kick was immortalised with a bronze statue unveiled in Melbourne.

Harris said she was humbled by the 3.3 metre tall statue, which was unveiled at Federation Square but does not yet have a permanent home. 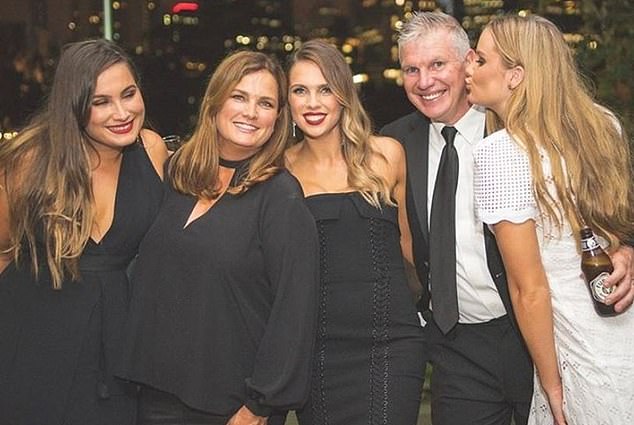 After his tragic death Frawley’s heartbroken wife Anita and his daughters Chelsea, Keeley and Danielle (pictured together) remembered him as a loving father, husband and friend

Harris was also photographed with Frawley during the 2018 longest-kick competition which she also shared prior to the 2019 event.

After his tragic death Frawley’s heartbroken wife Anita and his daughters remembered him as a loving father, husband and friend in a touching video tribute.

The AFL great’s wife and daughters Chelsea, Keeley and Danielle farewelled him more than a week after his ute slammed into a tree in country Victoria.

‘He was my absolute idol,’ Chelsea said through tears in an emotional video tribute broadcast at his funeral on Wednesday.

‘I know he’s my dad but he was also my best friend. And I don’t think many daughters can actually have that relationship with their parents.

Keeley said: ‘He’s not really gone, I can just look in the mirror and I’d see him in me.’

Frawley was a leading champion for mental health awareness and had been open about his battle with depression in the past.

But the 56-year-old’s mental health deteriorated in the days before his tragic death near Ballarat, not far from the potato farm he grew up on.

Hand in hand, Danny’s daughters remembered him for his affection and dedication to his family.

‘He’s always come in and say “I love you to the moon and back, Danielle”,’ she said.

‘And he would always hug you for a bit too long. I just wish that he was here right now so he could give me one of those awkwardly long hugs.’ 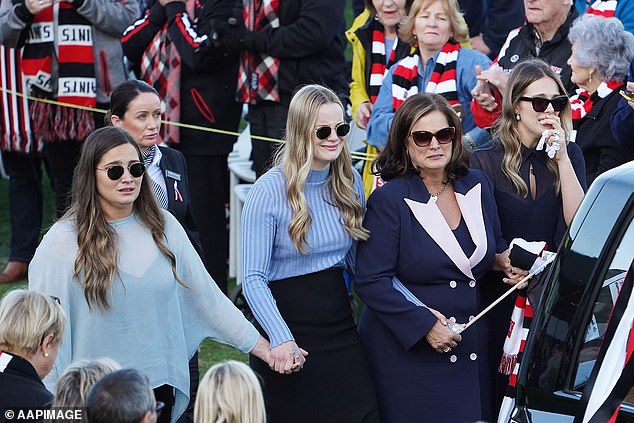 Hand in hand, Danny’s daughters remembered him for his affection and dedication to his family (pictured at his funeral)