Taylor Swift is urging Tennessee officials to permanently remove statues ‘that celebrate racist historical figures who did evil things’ in the state.

Swift took to both her Twitter and Instagram accounts Friday afternoon to share the passionate plea, directed at her home state’s Capitol Commission and the Tennessee Historical Commission.

‘As a Tennessean, it makes me sick that there are monuments standing in our state that celebrate racist historical figures who did evil things,’ Swift wrote on social media.

In particular, she called out two men – Edward Carmack and Nathan Bedford Forrest – noting that they ‘were DESPICABLE figures in our state history and should be treated as such.’

A statue of Carmack – a state lawmaker and newspaper editor – was torn down from its plinth outside the Tennessee Capitol in Nashville by protesters on May 30. State officials said Monday that, under state law, the statue would need to be repaired or restored and then returned to where it once stood.

The only way to move a memorial statue that stands on state property would be to obtain approval from the Tennessee Historical Commission, a state official told Fox 17.

Meanwhile, a bust of Forrest – a ‘KKK Grand Wizard’ and Confederate general – still remains inside the Capitol building and at least one statue of him stands elsewhere in the state.

Swift’s social media message specifically detailed the reasons why she believed that statues of the two men should be either not replaced or taken down.

In her social media posted, Swift explained the racist histories of both Carmack and Forrest 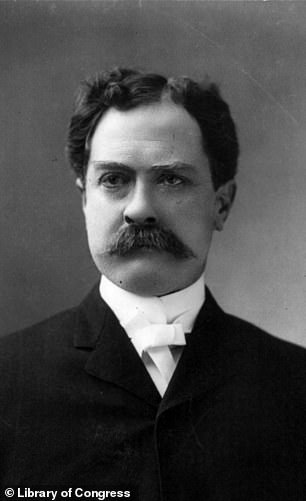 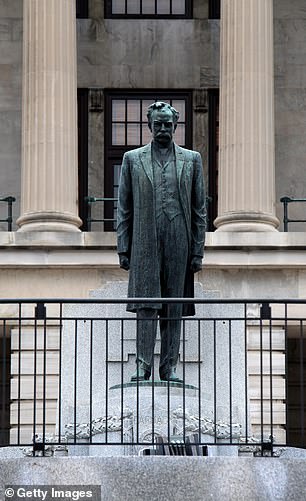 Edward Carmack (left) was a newspaper editor and state lawmaker. A statue (right) was erected in his honor outside of the state’s Capitol Building in Nashville, Tennessee 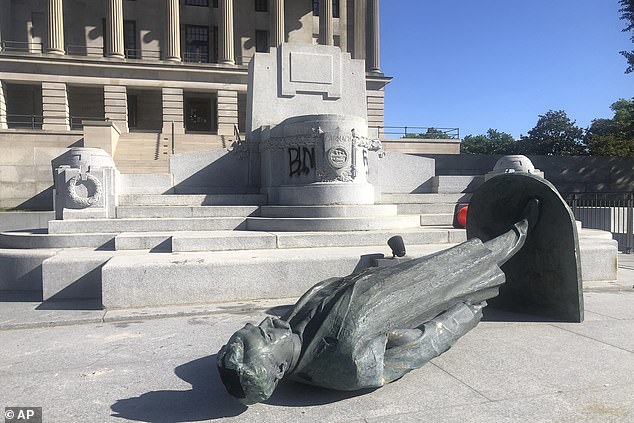 Carmack’s statue was toppled to the ground by protesters on May 30, after a peaceful demonstration became violent. The statue is seen here the day after, on May 31

About Carmack, Swift wrote: ‘FYI, he was a white supremacist newspaper editor who published pro-lynching editorials and incited the arson of the office of Ida B. Wells (who actually deserves a hero’s statue for her pioneering work in journalism and civil rights).’

She noted that ‘Replacing his statue is a waste of state funds and a waste of an opportunity to do the right thing.’

Swift then took aim at Forrest, linking to a Daily Beast article about a specific, bizarre, 25-foot statue of him which stands on private land just outside Nashville. The statue was created by John Karl Kershaw, who was the lawyer for Martin Luther King, Jr.’s assassin, James Earl Ray.

Swift called the statue a ‘monstrosity’ and wrote: ‘Nathan Bedford Forrest was a brutal slave trader and the first grand wizard of the Ku Klux Klan who, during the Civil War, massacred dozens of black Union soldiers in Memphis.

His statue is still standing and July 13th is “Nathan Bedford Forrest Day.” Due to social pressure, the state is trying to overrule this, and Tennesseans might no longer have to stomach it. Fingers crossed.’

On Wednesday, both chambers of the state’s legislature passed a bill releasing Tennessee Gov. Bill Lee from having to officially proclaim Nathan Bedford Forrest Day a holiday, but it will remain on the list of the state’s legal holidays for now, The Tennessean reported. 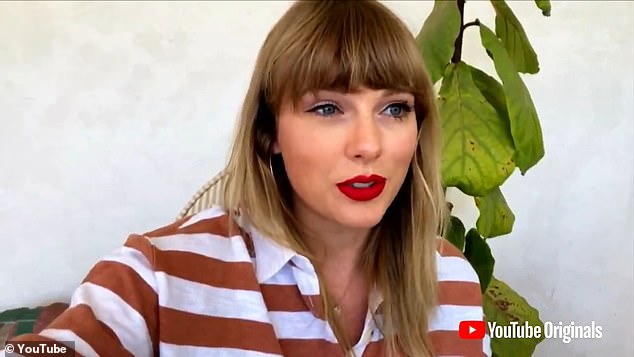 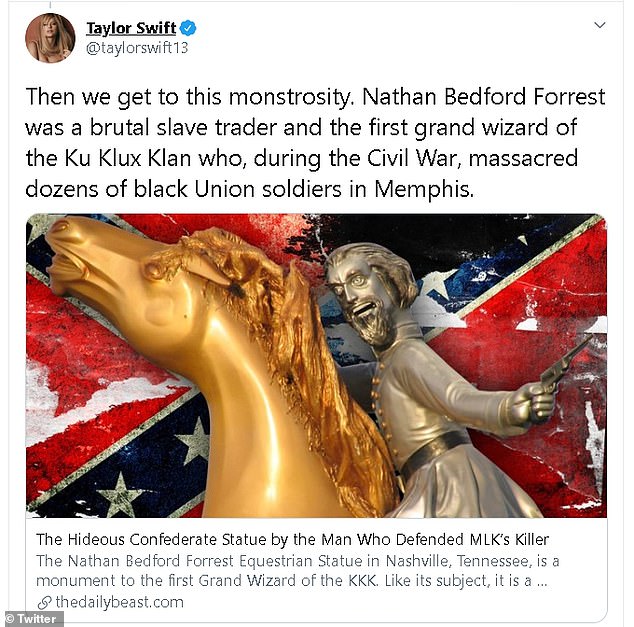 At the end of her plea, Swift explained why it was so important to take down the statues 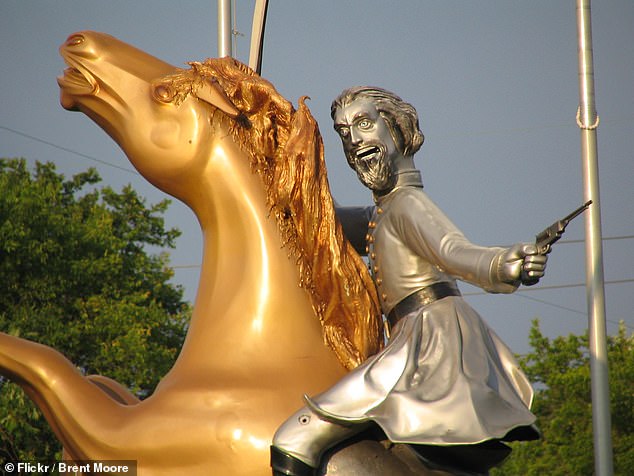 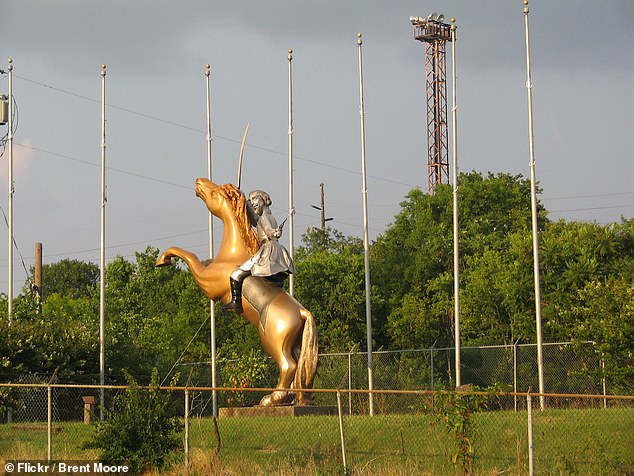 The 25-foot tall statue of Forrest as seen from afar. Swift called it a ‘monstrosity’ in her post 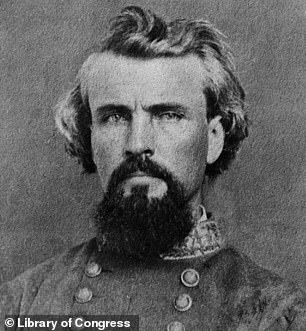 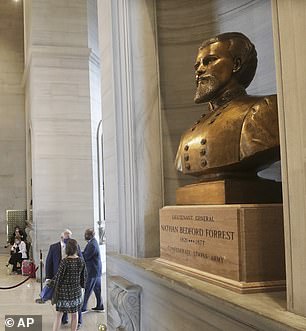 Forrest (left) was a ‘KKK Grand Wizard.’ His bust (right) stands in the Capitol building

Lee, a Republican, had originally introduced the bill, asking the legislature to completely remove the day as a holiday.

Swift went on to explain why removing the monuments to Carmack, Forrest and others was necessary.

‘Taking down statues isn’t going to fix centuries of systemic oppression, violence and hatred that black people have had to endure but it might bring us one small step closer to making ALL Tennesseans and visitors to our state feel safe – not just the white ones,’ Swift wrote.

‘We need to retroactively change the status of people who perpetuated hideous patterns of racism from “heroes” to “villains.” And villains don’t deserve statues.’

Swift then addressed the committees apparently responsible for decisions about keeping the statues in situ.

‘I’m asking the Capitol Commission and the Tennessee Historical Commission to please consider the implications of how hurtful it would be to continue fighting for these monuments,’ she wrote.

‘When you fight to honor racists, you show black Tennesseans and all of their allies where you stand, and you continue this cycle of hurt. You can’t change history, but you can change this.’

In 2017, a statue of Forrest was officially removed from a park in Memphis, where his remains were also buried. But, on May 12, it was revealed that his remains would be allowed to be removed from the park, as well, WREG reported.

Swift had previously kept a low-profile when it came to sharing her political views, but after turning 30 in December 2019, she has been more visibly invested in using her large social media presence to address politics, racism and LGBTQ rights.

On May 29, four days after George Floyd’s death, she took a major stand when she tweeted: ‘After stoking the fires of white supremacy and racism your entire presidency, you have the nerve to feign moral superiority before threatening violence? “When the looting starts the shooting starts”??? We will vote you out in November. @realdonaldtrump’

George Floyd protesters have been tearing down or vandalizing statutes of historical figures with controversial pasts across the country in recent weeks.

Among the statues defaced and toppled were: Christopher Columbus statues in Boston and St. Paul, Minnesota; a Robert E. Lee statue in Montgomery, Alabama, and a Jefferson Davis statue in Richmond, Virginia.