Taylor Swift has revealed her 10-minute track All Too Well was formed from an ad-libbed rehearsal session during a ‘sad and upsetting’ time in her life.

The breakup ballad is widely rumoured to be about her relationship with Jake Gyllenhaal, who she split from in 2010 after a two-month romance.

While Taylor has never confirmed if the track is about Jake, she admitted during an appearance on The Tonight Show Starring Jimmy Fallon that she was going through a tough time in life when she penned it back in 2011.

‘I was not fun to be around’: During Taylor Swift’s appearance on the on The Tonight Show she admitted she was ‘upset and sad’ when she penned All Too Well about ex Jake Gyllenhaal

Taylor explained: ‘I showed up for rehearsals and I just was really upset, and sad, and everybody could tell, it was really, like, not fun to be around me that day.

‘So I started playing guitar and just kind of playing the same four chords over and over again.

While Taylor penned the track in 2011, a new 10-minute version of the breakup ballad features on the re-recording of her 2012 album Red. 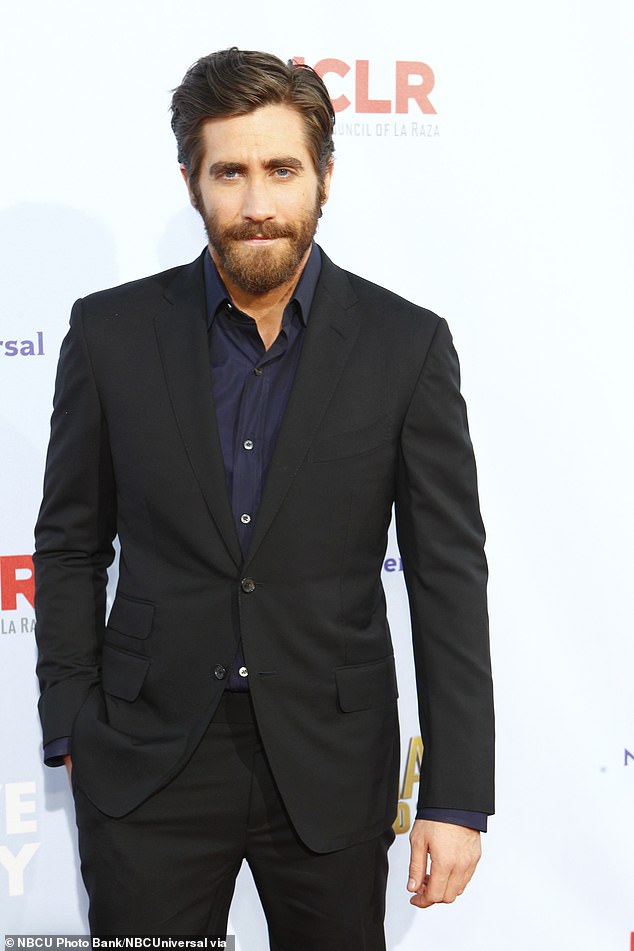 Ex: In the new longer version, the 31-year-old musician seemingly suggests that her nine-year age gap with Jake, 40, played a role in their split 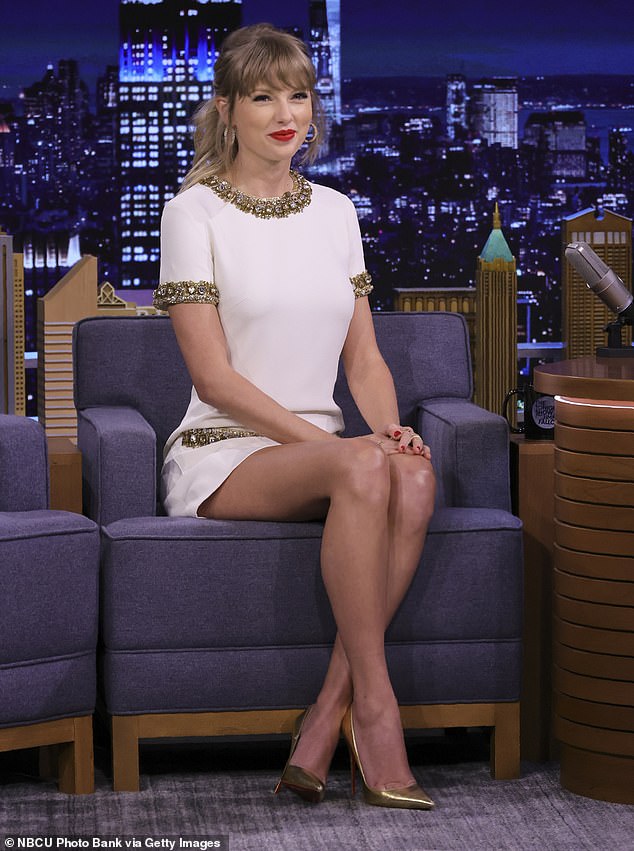 Busy star: The 31-year-old singing superstar promoted the album as well as her short film directorial debut and upcoming gig on Saturday Night Live on the NBC talk show

In the new longer version, the 31-year-old musician seemingly suggests that their nine-year age gap played a role.

‘You said if we had been closer in age maybe it would have been fine / And that made me want to die,’ sings Taylor.

The 40-year-old actor reportedly dated the Grammy Award-winner from October to December 2010. By early 2011, Taylor began crafting the emotional track.

Elsewhere on the show Taylor revealed the 10-minute version of All Too Well is the song she’s most excited about her fans hearing. 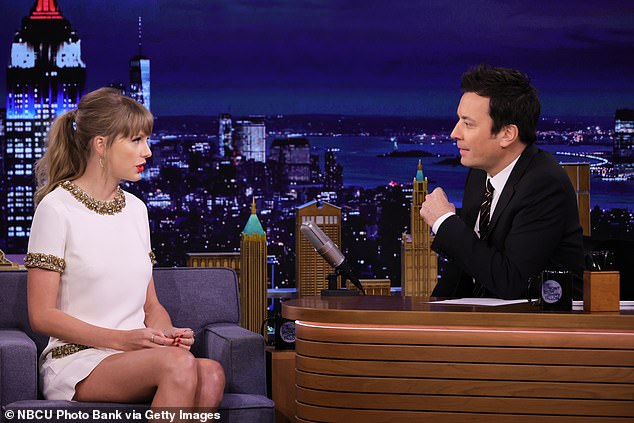 Good question: Jimmy, 47, asked Taylor what song she was most excited for her fans to hear and she gladly answered Most excited: ‘The one that I am the most excited about is a song called All Too well in parentheses ”the 10 minute version”,’ Taylor revealed

‘And that’s the thing I’m the most excited about, ’cause it’s the original lyrics,’ Taylor said.

She also promoted the short film All Too Well that she wrote and directed that will be released Friday afternoon on YouTube.

Jimmy spilled that there was a premiere for the short film. 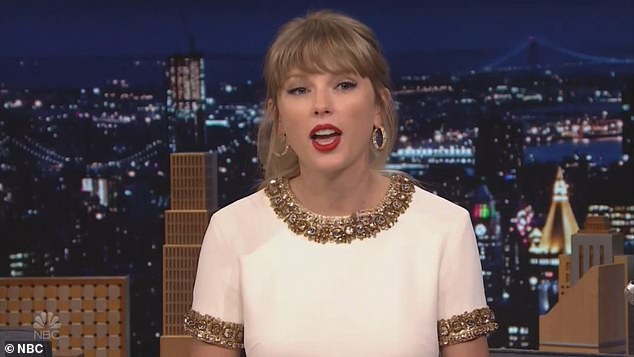 Short film: Taylor also promoted the short film All Too Well that she wrote and directed that will be released Friday afternoon on YouTube

‘Yes, actually, and I haven’t actually told people that yet, but I’m so excited,’ said Taylor as Jimmy interrupted to apologize.

‘It’s great! No, it’s good. This is a great place to announce it,’ said Taylor who shared that the short film premiere will be held at the AMC 13 Theater in Lincoln Square in New York on Friday afternoon. 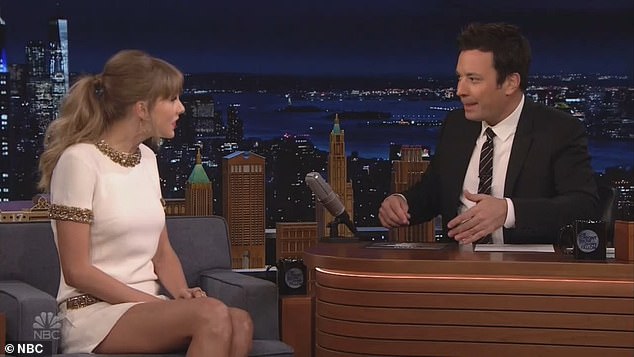 Film premiere: ‘It’s great! No, it’s good. This is a great place to announce it,’ said Taylor who shared that the short film premiere will be at the AMC 13 Theater in Lincoln Square in New York on Friday afternoon

Taylor also admitted that she loves leaving Easter eggs and clues for her fans and Jimmy later asked for a hint to what songs she’ll perform on SNL.

‘I love to hint. Which two songs? What if it was not two songs as much as it was one song that is the length of three songs?,’ Taylor hinted.

Jimmy and Taylor earlier played the game Box Of Lies. 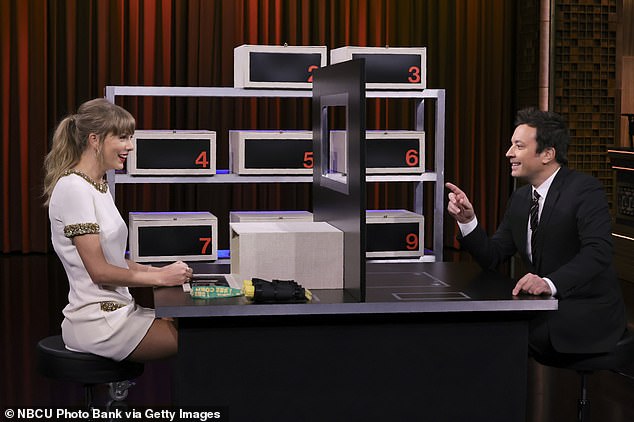