Taylor Swift’s collaborator has revealed that the singer didn’t tell anyone — not even her record label Republic Records — that she was releasing her new ‘Folklore’ album ‘until hours before it was launched.’

The National multi-instrumentalist Aaron Dessner, who co-wrote and produced 11 of the album’s 16 songs, opened up about working with Swift, 30, and the creation of the secret album during an interview with Pitchfork, explaining that they used voice memos that the pop star recorded on her cellphone to work on the tracks remotely.

‘There was no outside influence at all. In fact, nobody knew, including her label, until hours before it was launched,’ Dessner, 44, said. ‘For someone who’s been in this glaring spotlight for 15 years, it’s really liberating to have some privacy and work on her own terms. She deserves that.’

Surprise! Taylor Swift’s record label Republic Records didn’t know about her new ‘Folklore’ album ‘until hours before it was launched,’ according to her collaborator Aaron Dessner 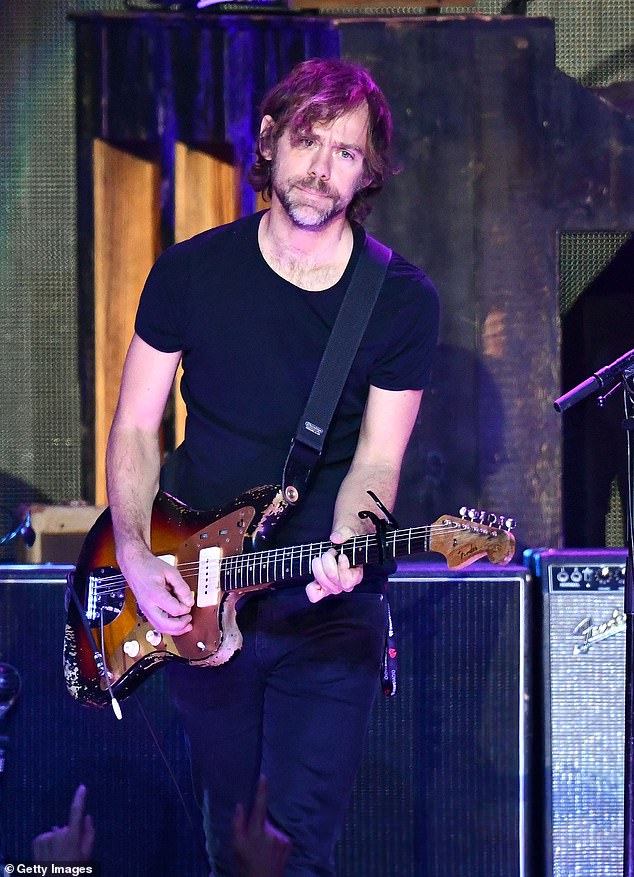 Teamwork: Dessner, a multi-instrumentalist from in the indie rock band The National, co-wrote and produced 11 of the album’s 14 songs

‘At times, if I wanted friends to play on the record, it was a little difficult because you can’t send a file with her vocals,’ he admitted. ‘But everyone was cool. At the end, I reached out to some wizards just to add bits, and that was nice. It was kind of fun: “What? Why can’t you tell me, Aaron?” Then they start guessing. Everyone made a game out of it.’

On Tuesday, Dessner tweeted a screenshot of a text from Swift that she sent him on April 28 at 2:23 am while they were discussing the album’s lead single ‘Cardigan.’

The behind-the-scenes look at their collaboration was posted to promote a special edition of the song with the voice memo and alternative lyrics that will be released on her website and iTunes on Thursday.

‘Looking back at @taylorswift13 ‘s text with her original voice memo of Cardigan…still surreal,’ he wrote.

In the text, Swift, who is listed as ‘Taylor’ in Dessner’s phone, shared her excitement over the creation of song. 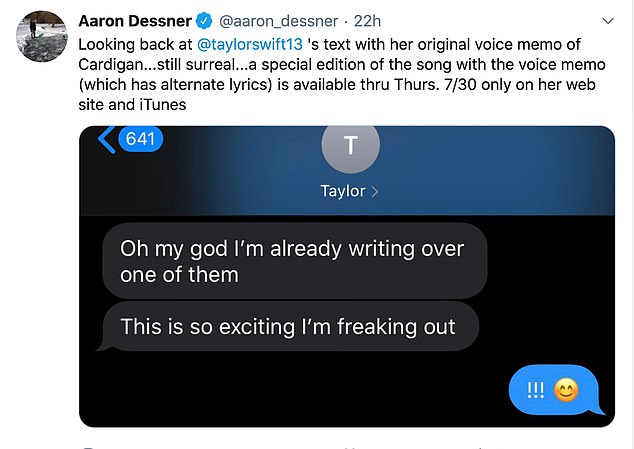 Behind the scenes: On Tuesday, Dessner shared a screenshot of a text from Swift that she sent him at 2:23 am while they were discussing the album’s lead single ‘Cardigan’ 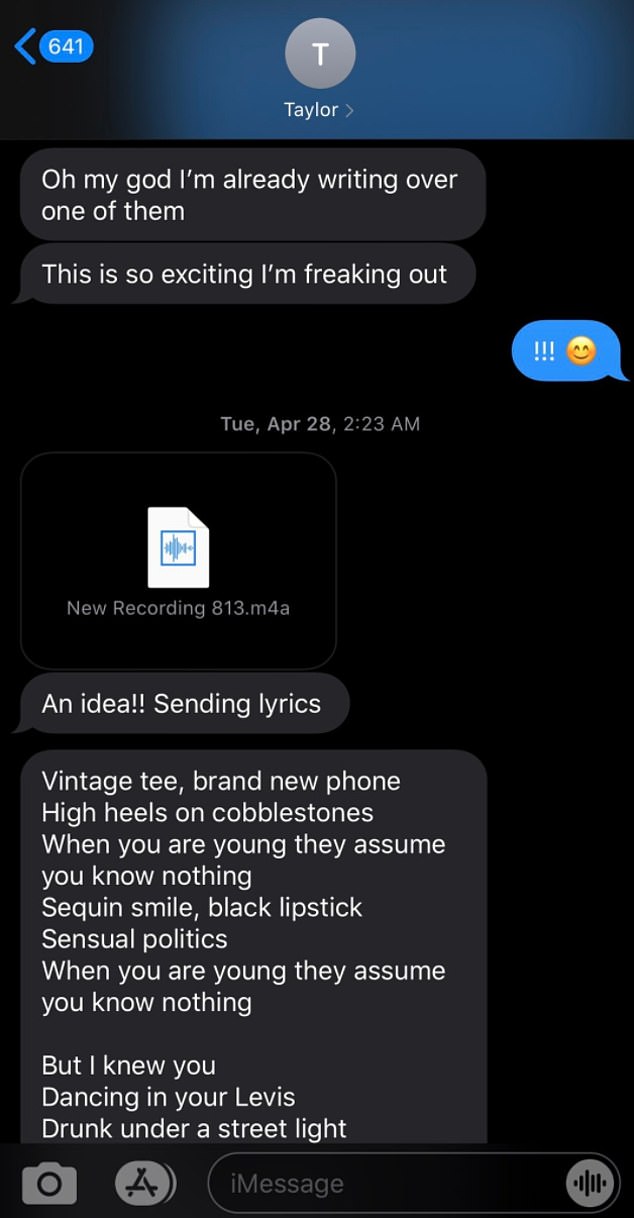 Creative process: The text message included a voice memo recording from Swift and her opening lyrics to ‘Cardigan’

‘Oh my god I’m already writing over one of them,’ she wrote. ‘This is so exciting I’m freaking out.’ Dessner responded with three exclamation points and a smiley face emoji.

The text included the new recording and the song lyrics that Swift had sent him, which ended up being the track’s opening verse.

In his interview with Pitchfork, Dessner explained that he already had a ‘large folder of ideas’ when Swift reached out to him amid the coronavirus pandemic.

‘She was very clear that she didn’t want me to edit any of my ideas; she wanted to hear everything that was interesting to me at this moment, including really odd, experimental noise,’ he said. ‘So I made a folder of stuff, including some pretty out-there sketches.

‘A few hours later, she sent “Cardigan,” fully written in a voice memo. That’s when I realized that this was unusual — just the focus and clarity of her ideas. It was pretty astonishing. Over the next couple months, this would just happen; all of a sudden, I’d get a voice memo. And then another. 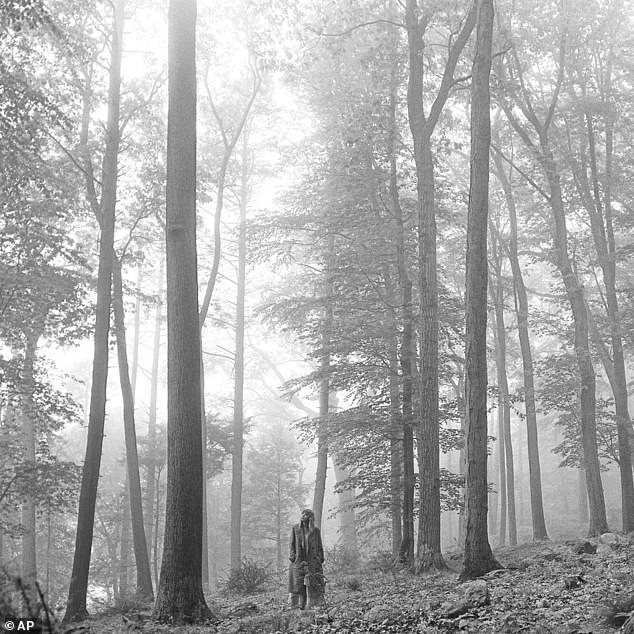 New direction: Swift surprised and delighted her fans in the early hours of July 24 when she released her eighth studio album ‘with less than 24 hours’ notice

First peek: Preceding the release of ‘Folklore’ was Swift’s video for her song ‘Cardigan,’ which she debuted shortly before the rest of the album

‘Eventually, it was so inspiring that I wrote more ideas that were specifically in response to what she was writing.’

Swifts regular producer Jack Antonoff also collaborated with her on ‘Folklore,’ which has received rave reviews and has been labeled her best work to date by some critics.

The album features a more meditative sound, suffused with piano, atmospheric guitar, and orchestrations, along with experimental electronic effects, a striking departure from her more boisterous pop album Lover from last year.

Swift surprised and delighted her fans in the early hours of July 24 when she released her eighth studio album ‘with less than 24 hours’ notice — and people wasted no time uncovering any and all potential meanings hidden in each original track.

Fans theorized that one song titled ‘Betty’ may have been Swift’s clever way of revealing the name of her pal Blake Lively’s nine-month-old daughter.

A source close to the situation alleged to People that the song was in fact ‘named in part’ for Lively’s third daughter, whom the actress shares with her husband Ryan Reynolds. 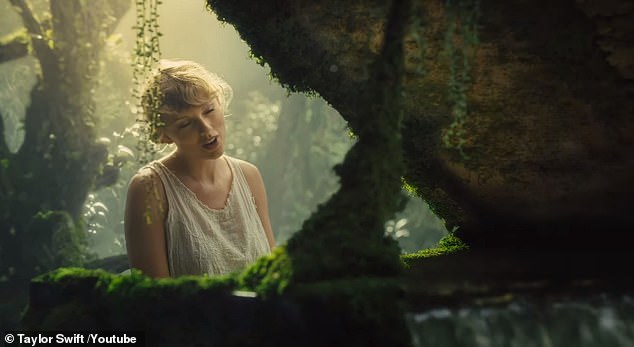 Building blocks: Swift credited the genesis of the songs with a focus on abstract imagery 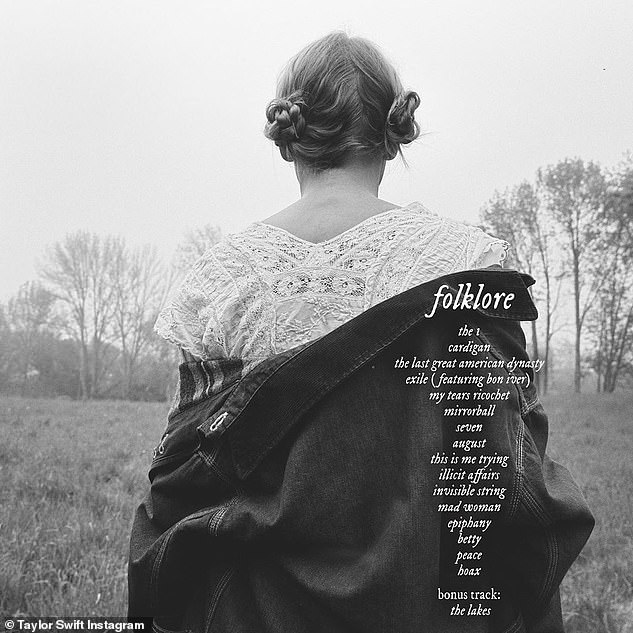 Folklore: With 16 original tracks to scour through, fans pointed out plenty potential Easter eggs and shared theories about the people who inspired the songs

The beloved Hollywood couple welcomed their third daughter in October of 2019, but have yet to reveal her name to the public. Blake and Ryan also share daughters James, five, and Inez, three, whose names are also featured in the song.

In June of 2019, Taylor was shocked to learn that Braun’s Ithaca Holdings not only acquired Big Machine Records, but also her entire six-album music catalog, according to Billboard.

Swift has since called out Borchetta and Braun for hijacking her ‘art’  and claims that she did not give permission for the sale to take place.

‘It’s obvious that wanting me dead / Has really brought you two together,’ she sing in one poignant line on the ‘Mad Woman’ track.

Swift detailed the process of writing and recording her album in isolation in a social media post, explaining that trusting in her imagination and focusing on songwriting helped her to escape the isolation and doldrums that came with quarantining amid the coronavirus pandemic. 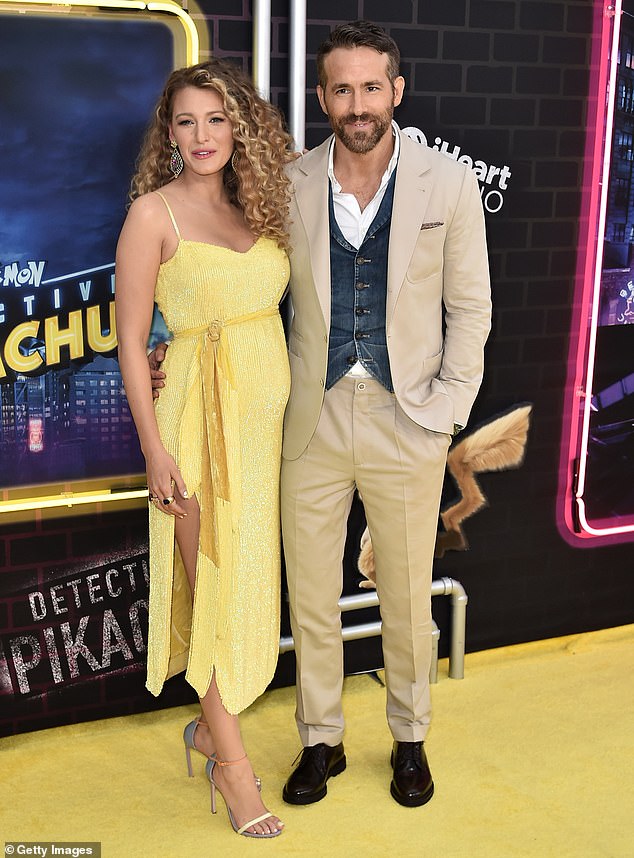 May just be true: It was reported that Swift’s song ‘Betty’ was ‘named in part’ after Blake Lively and Ryan Reynolds’ third daughter, whose name has not been publicly released 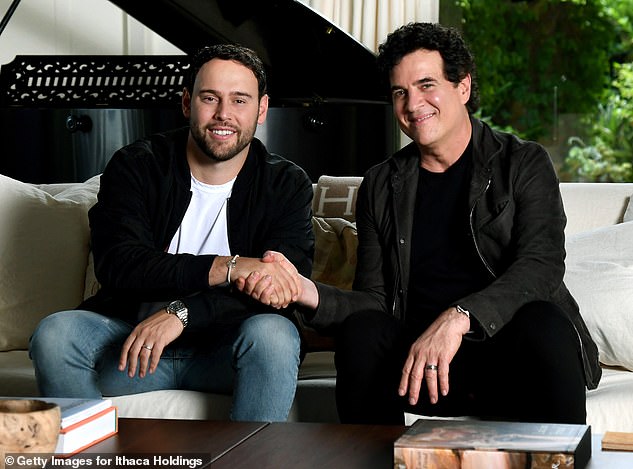 ‘In isolation my imagination has run wild and this album is the result, a collection of songs and stories that flowed like a stream of consciousness,’ she began a short essay about her creative journey that accompanied a moody black and white photograph of her looking over her shoulder.

‘Picking up a pen was my way of escaping into fantasy, history, and memory. I’ve told these stories to the best of my ability with all the love, wonder, and whimsy they deserve,’ she continued.

The Blank Space singer wrote that the album ‘started with imagery. Visuals that popped into my mind and piqued my curiosity.’

She listed some of the images that inspired her song titles, including ‘Cardigan’ and ‘August.’

‘An exiled man walking the bluffs of a land that isn’t his own, wondering how it all went so terribly, terribly wrong,’ she wrote. ‘An embittered tormentor showing up at the funeral of his fallen object of obsession. A seventeen-year-old standing on a porch, learning to apologize. Lovestruck kids wandering up and down the evergreen High Line. My grandfather, Dean, landing at Guadalcanal in 1942. A misfit widow getting gleeful revenge on the town that cast her out.’

Taylor’s last few albums have come under criticism for deploying overly personal lyrics, which some critics considered to be score-settling, but the Shake It Off songstress made it clear she was focusing on her songcraft with more fictionalized tunes.

‘A tale that becomes folklore is one that is passed down and whispered around. Sometimes even sung about. The lines between fantasy and reality blur and the boundaries between truth and fiction become almost indescribable,’ she explained. ‘Speculation, over time, becomes fact. Myths, ghost stories, and fables. Fairytales and parables. Gossip and legend. Someone’s secrets written in the sky for all to behold.’