Tuberculosis is on the rise in the state of New York for the first time since the 1980s.

The six percent increase comes after more than a decade of funding cuts that reduce the number of available resources for detecting, treating and preventing the disease that claims the lives of 1.7 million people worldwide each year.

There was a 6.3 percent increase in tuberculosis in New York between 2016 and 2017, which community leaders say is a result of drastic cuts to TB funding in the last decade

National funding for TB has stayed relatively steady across the past decade, but in New York, funding has been cut almost in half.

‘But funding from the both the New York State and New York City levels for TB have declined dramatically over the last decade, meaning public health reach is much more limited than it could or should be,’ Lessem said.

TB rates have been on the decline worldwide since the 1950s, but it is still the world’s number one infectious killer, affecting one third of the global population.

It is easily contracted via airborne fluids when an infected person talks, sneezes or talks.

It mainly effects the lungs and symptoms include coughing up blood, weight loss, fever, fatigue and chest pain.

Federal funding to the city declined 75 percent in that same time span, which state funding was reduced 20 percent during the current fiscal year.

The results of more than a decade of cuts are just now being seen because the disease is known for its slow growth. 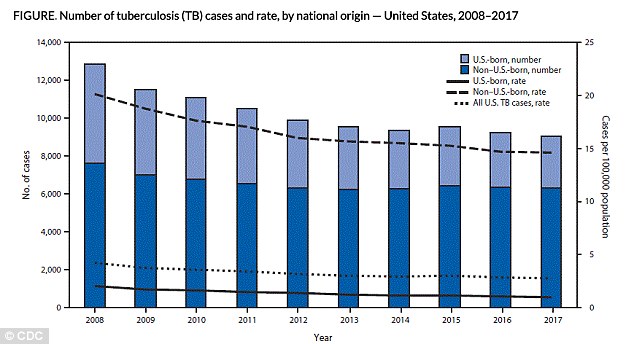 The national rates for TB have been falling steadily across the past decade, including a 1.8 percent decrease from 2016 to 2017 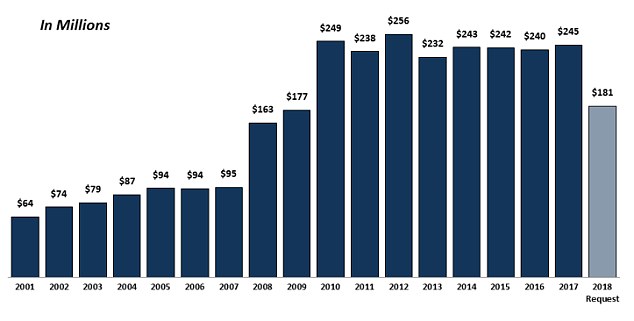 ‘We know from decades of past experience that unless we change course quickly, this pattern of years of devastating cuts followed by a predictable subsequent rise in TB cases are a harbinger of much worse to come,’ Housing Works President and CEO Charles King said.

Since the cuts began in 2007, all but four of New York City’s chest clinics for TB treatment have been closed, and the city’s TB response staff has been reduced by nearly half.

WHAT IS TUBERCULOSIS (TB)?

Tuberculosis (TB) is a potentially serious infectious disease that mainly affects your lungs.

The bacteria that cause tuberculosis are spread from one person to another through tiny droplets released into the air via coughs and sneezes.

Although your body may harbor the bacteria that cause tuberculosis, your immune system usually can prevent you from becoming sick. For this reason, doctors make a distinction between Latent and Active TB

Symptoms of active TB include coughing up blood, weight loss, fatigue, and chest pain, and fever.

Tuberculosis can also affect other parts of your body, including your kidneys, spine or brain.

‘It is no surprise with such scant resources compared to the need, that TB is on the rise,’ Lessem said.

TB rates have historically been higher in immigrant communities, and more than 86 percent of people diagnosed in 2017 were born outside the country.

Steve Choi, executive director of the New York Immigration Coalition, pointed out that the majority of those people had been in the US for more than five years ‘leaving ample time for outreach and prevention that’s simply not being done’.

Choi added: ‘Our city and state governments have promised to make New York a safe haven for all—to do so, they must address TB.’

People living with HIV are also at a significantly higher risk for being infected with TB, and TB is the leading cause of death for people with HIV.

‘If New York is serious about being the healthiest state, we must address TB. If New York is to honor its commitment to end the HIV epidemic, we cannot forget about TB, its most deadly—but preventable, curable—coinfection,’ Guillermo Chacon, President of the Latino Commission on Aids and President of the Hispanic Health Network, said.

A collection of eight health, housing, community and immigration groups issued a statement Wednesday calling on government officials on each of the three levels to restore funding.

‘We have the tools we need to end TB as a public health threat in New York City—what’s missing is funding and political will to do so,’ said Erica Lessem.

Lessem added: ‘That TB is on the rise in our city in this state and country, with their wealth of resources, is inexcusable.’ 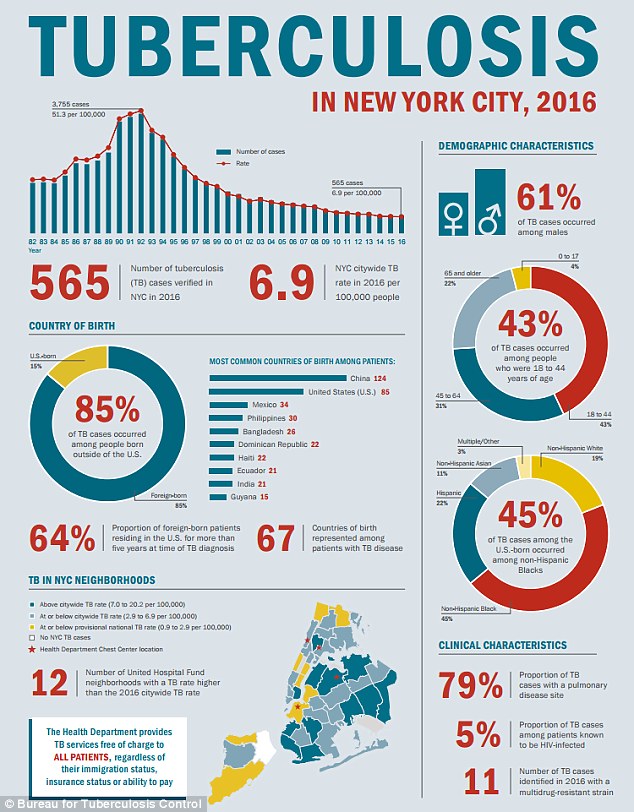