Teacher, 24, shocked after what she thought was pimple under her eye turned out to be skin cancer

A New York woman was shocked after what she thought was a pimple under her eye turned out to be skin cancer.

Gibson Miller, a 24-year-old middle school teacher, noticed a light pink spot under her left eye when she woke up one morning in August 2018.

She dismissed it as a blemish but, several months later, it still hadn’t gone away.

Miller decided to visit her dermatologist, who ordered a biopsy.

Within a week, she was diagnosed with basal cell carcinoma, the most common form of skin cancer that would require two surgeries: one to remove the cancer and another to reconstruct the tissue around the eye.

Gibson Miller, 24 (pictured), from New York City, woke up last year in August 2018 and found a light pink spot under her left eye 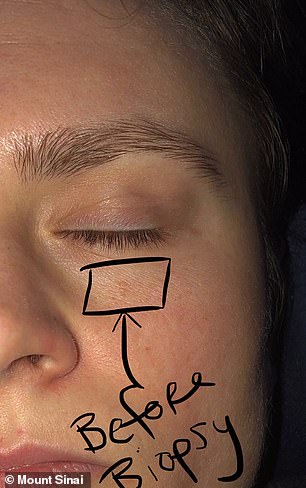 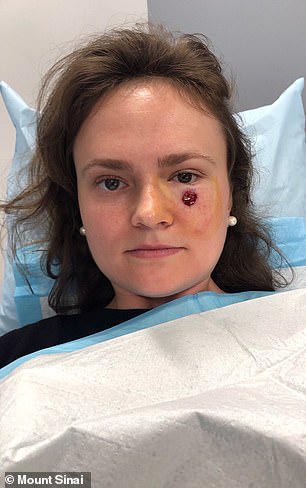 At first she thought it was a pimple, but it didn’t go away. In April 2019, she decided to visit a dermatologist, who ordered a biopsy. Pictured: Miller before her biopsy, left, and after her first surgery, right

Miller began playing tennis at nine years old and joined both her high school and college teams so she was ‘constantly outside’.

She never wore visors, and she rarely wore hats or sunglasses. She used sunscreen, but not regularly.

‘I never liked sunglasses. There was a pair on my bag, but it got in my way when I served so I never used them,’ Miller told DailyMail.com.

Last week, a new study from the American Academy of Dermatology revealed that rates of skin cancer are rising among women between ages 18 and 39.

Researchers found that between 1970 and 2009, the rates of melanoma – the most fatal form of skin cancer – spiked 800 percent.

The team said that one of the reasons for the sharp rise isn’t due to more sun exposure but an increased use of indoor tanning beds.

‘[Sunscreen] always stayed in my bag, but I used it sporadically. It wasn’t until my sophomore or junior year that I used it consistently.’

In April 2019, Miller finally visited the dermatologist, who was worried about the spot under her eye.

‘She said: “I don’t like the way it looks because it’s asymmetrical. I’d like to take a biopsy”,’ Miller said. ‘One week later, she called me.’

She was diagnosed with basal cell carcinoma (BCC), a form of skin cancer that occurs in the basal cell, a type of cell that produce new skin cells as old cells die.

It most often begins on the head or neck and appears as a translucent, light pink or red bump on the skin.

Australian actor Hugh Jackman has had at least six procedures to remove BCC from his nose after first being diagnosed in 2013.

Miller said that she had the pink blemish long before she noticed it.

‘I went back to look at pictures after I was diagnosed and I had that spot three years prior to me noticing it,’ she said. ‘No one else did because it was small and pearlized.’ 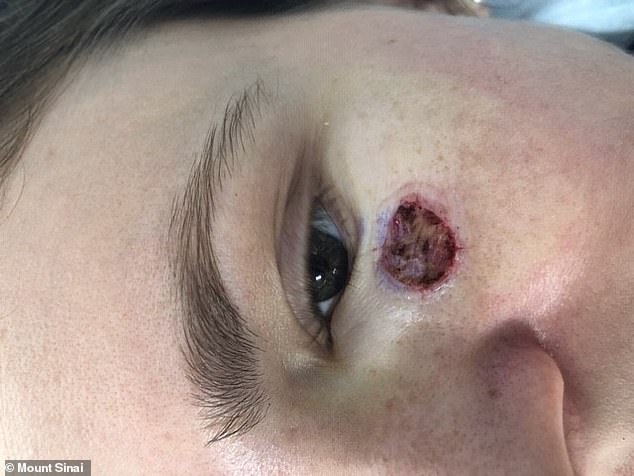 Miller was diagnosed with basal cell carcinoma, a skin cancer that occurs in a type of cell that produce new skin cells as old cells die. Pictured: Miller after her first surgery 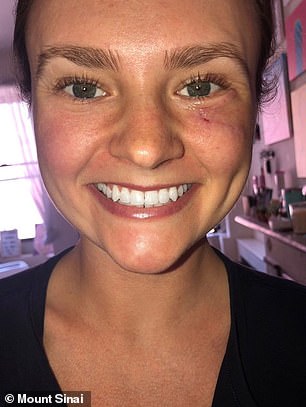 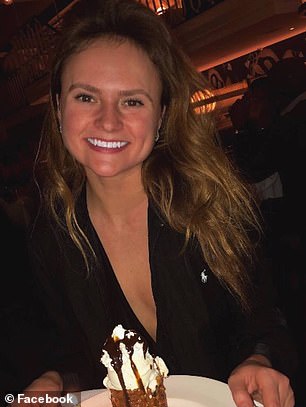 More than four million cases of basal cell carcinoma are diagnosed each year in the US, according to the Skin Cancer Foundation.

It is the most frequently occurring form of all cancers, but only causes about 2,000 US deaths every year.

However, the American Cancer Society estimates that more than 7,200 will die of melanoma in 2019.

On June 20, she underwent Mohs surgery, a procedure in which layers of cancerous skin are removed until there is only uninfected tissue. 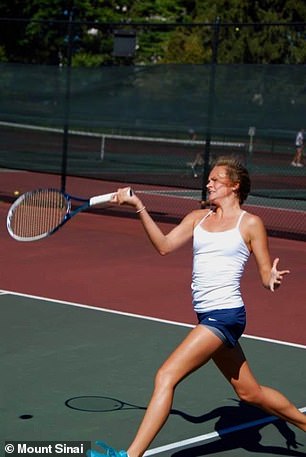 She now wears sunscreen every day and either a hat or sunglasses when she goes outside. Pictured: Miller playing tennis

The following day, she had reconstructive surgery done by Dr James Chelnis, an oculoplastic surgeon at New York Eye and Ear Infirmary of Mount Sinai.

He says patients have skin cancer around the eyes from either forgetting to put on sunscreen or not putting on enough.

‘The reason we see a higher rate of skin cancer around the eye is that it’s very difficult to protect it,’ Dr Chelnis told DailyMail.com.

‘We’re not covering it with clothing and often not with sunblock. So it’s getting constant exposure, which is a recipe for a problem.’

He recommends choosing sunblock that contain the ingredient zinc oxide and titanium – known for offering strong protection against UV rays.

‘Back in the day, zinc oxide and titanium didn’t allow for easy spreading so people didn’t want to use it,’ says Dr Chelnis.

‘Now there’s easy spreading and that’s what I use to protect myself. It’s never too soon to start protecting your skin.’

Miller’s scar is now starting to heal and she said the experience has made her much more vigilant about protecting her skin.

She wears sunglasses or a hat when she goes outdoors and applies sunscreen to her face and ears, and any other body parts that are exposed.

‘People say: “Sunscreen smells bad” or “I don’t want to be seen wearing it”,’ Miller said.

‘But sunscreen is sexy; it’s responsible.’