A California teacher and reserve police officer was placed on leave after he accidentally fired a gun in the classroom, injuring one student.

Dennis Alexander was teaching students at Seaside High School about gun safety for his Administration of Justice class when his weapon went off around 1:20 pm on Tuesday.

The gun was pointed towards the ceiling when it fired causing pieces of the ceiling to fall on the ground.

Fermin Gonzales said his 17-year-old son was injured during the incident and had to be taken to the hospital for bullet fragments in his neck. He told KSBW that Alexander had told the class that he wanted to make sure the gun wasn’t loaded when it accidentally discharged.

Dennis Alexander, a teacher at Seaside High School in California, accidentally fired a gun inside a classroom injuring a student

‘It could have been very bad,’ Gonzales said.

According to the father, school officials did not check to make sure students were uninjured after the incident. Gonzales said his son came home with blood on his shirt and fragments of the bullet in his neck.

The student’s parents took him to the hospital for an x-ray.

‘He’s shaken up, but he’s going to be OK, Gonzales said.

Seaside Police Chief Abdul Pridgen told The Montreal County Weekly that the student was struck in the neck by ‘debris or fragmentation’, but said it was not a bullet.

Teachers are legally not allowed to have firearms in California classrooms, even if they have a permit. Sand City Police Chief Brian Ferrante told KSBW that he’s concerned about why Alexander, a reserve officer with the department, had a loaded gun in the classroom.

‘We will be looking into that,’ he said. ‘My first concern was that no one was hurt’.

The teacher has since been placed on administration leave from the school and the Sand City Police Department.

Alexander has been a reserve officer with the Sand City Police Department for 11 years. In 2013, he was awarded Reserve Officer of the Year. He also serves as a Seaside City Council member and a Red Cross volunteer. 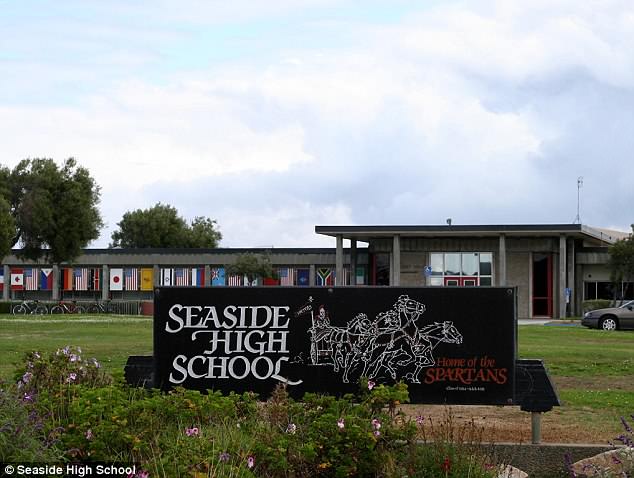 The school issued a statement regarding the incident saying counseling services will be available for students who may need it.

‘We want to make you aware of an accident that occurred in the Administration of Justice class today at Seaside High School. As some of you may know, the teacher is a reserve police officer. Today, during class, the teacher accidentally discharged his firearm during a lesson while it was pointed at the ceiling. Debris from the ceiling then fell,’ the school said.

‘Upon learning of the incident, our Human Resources department, school site administration and the Seaside Police Department immediately began investigating the incident, including interviewing students in the class. We will also have counseling services available for students. … The safety of your student is always our top priority, and we will continue to remain vigilant in our efforts to keep them safe while they are under our care.’