A newly-married couple has been widely praised for their decision to help out local school children in need instead of accepting wedding gifts.

Kelli Cameron, a first grade teacher in Tampa, Florida, became engaged to her partner Matt last summer. As they began planning their wedding, they realized there was ‘nothing specific’ that they needed, so they instead set up a registry on Amazon intending to benefit a nearby school and its pupils.

Kelli, 28, reached out to the staff at the Booker T. Washington Elementary School (also in Tampa) and asked what the incoming students would be in need of ahead of returning to their studies in September.

Selfless: A Florida-based couple have been commended for donating backpacks to a school in need instead of asking for traditional wedding presents 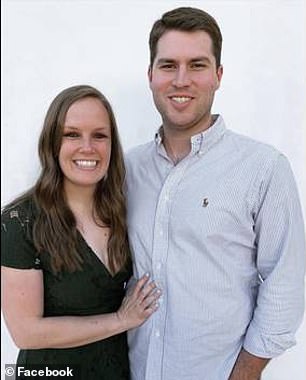 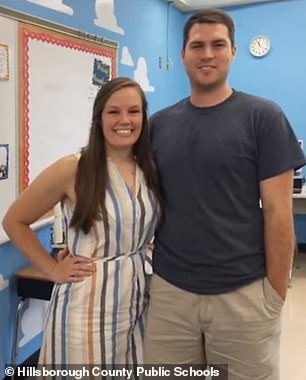 Newlyweds: Kelli and Matt Cameron, pictured, said it was ‘amazing’ to take a celebration that was supposed to be about them and have it benefit others

Kelli works at Roland Park Elementary School five miles away from Booker T. Washington. She has been a teacher for seven years.

As the future newlyweds planned their June ceremony, they created a registry based on the teachers’ recommendations.

On their wedding website, they appealed to guests to select a backpack from the Amazon list and fill it with supplies intended for either a young boy or girl.

‘We started thinking of different charitable acts we could do, and as a teacher, I really liked the school supply idea,’ Kelli told Fox13. ‘So I talked about it with Matt, and we decided on the idea,’

‘Each guest got a little description of who they were buying for and what size they were for uniforms, and what grade they were in for school supplies that were needed,’ she added.

‘Instead of crock-pots it was Sharpies and T-shirts and khaki shorts,’ groom Matt, 29, revealed in a video shared to Hillsborough County Public Schools Facebook account. 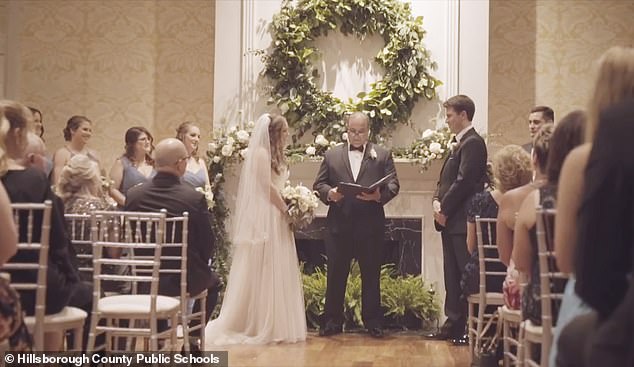 Big day: The couple’s wedding resulted in 70 backpacks filled with supplies for a nearby school 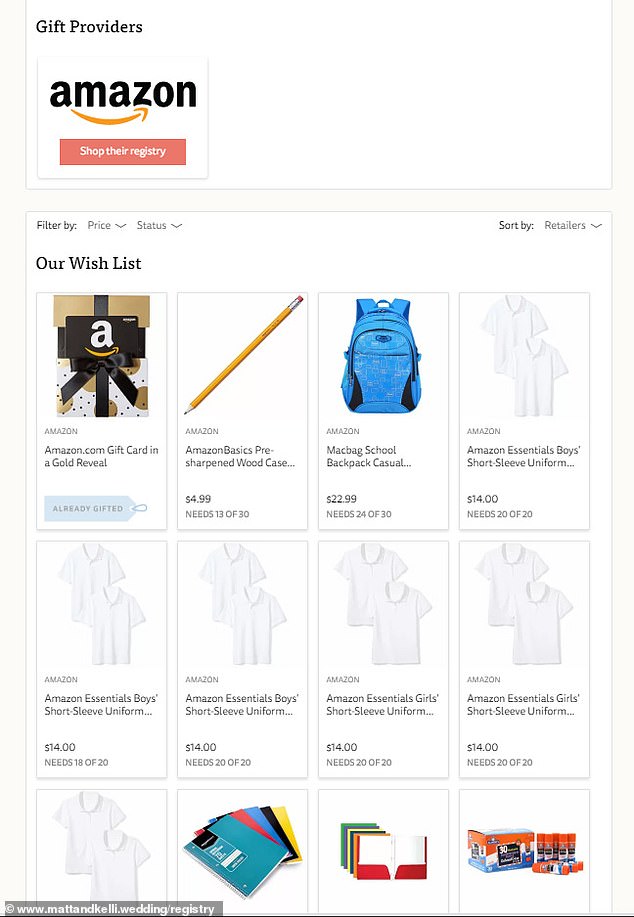 Convenient: The couple compiled the essentials into an online registry and shared the suggestions with guests Heart and soul: A tearful Kelli said she was happy that the kids will be so excited to start school with their new kits

‘Being a teacher, I put my heart and soul into the kids. You try and you try to give to them and a lot of the other teachers do that as well,’ a visibly emotional Kelli added.

‘At the end of the wedding, two or three large carts were being pushed out of the venue and loaded into a truck, and the back of my husband’s truck was completely filled with backpacks,’ she proudly shared. 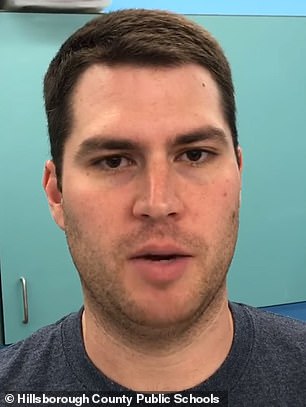 Proud: Matt, pictured, said that his new wife is passionate about helping students every day

‘How wonderful it was that we were able to do that – take something that was about us and help others,’ a tearful Kelli said.

‘The kids that get the backpacks will be excited for that first day of school and excited that they have a new backpack and new supplies and are ready to start the school year.’

Of his new wife’s gesture, Matt said this move was exemplary of her character.

‘I am not surprised at all that she came up with this and went into it so passionately because that is what she does every day,’ he said.

The big-hearted couple ended up donating 70 backpacks full of supplies after their recent wedding celebrations at Palma Ceia Golf and Country Club.

‘I work at a school that already has a lot of help, so I knew we didn’t need those items,’ she also told Fox13.

‘Being a teacher, I know a lot of kids come with nothing to school, and you see the kids so excited about the little things: a backpack, or new shoes. It’s so important that they can start school excited, and a lot of teachers spend their own money for their kids. This helped out a little bit.’

After the news was shared on the Hillsborough County Public Schools Facebook channel, the Camerons were commended for their generosity and selflessness. 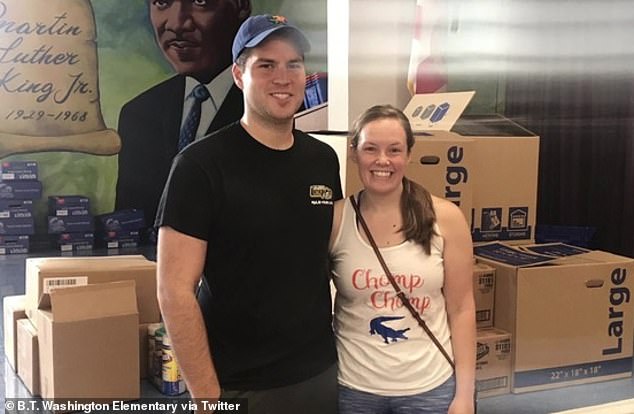 Thankful: ‘We are so thankful for their generosity, partnership and willingness to put our students first,’ the school praised 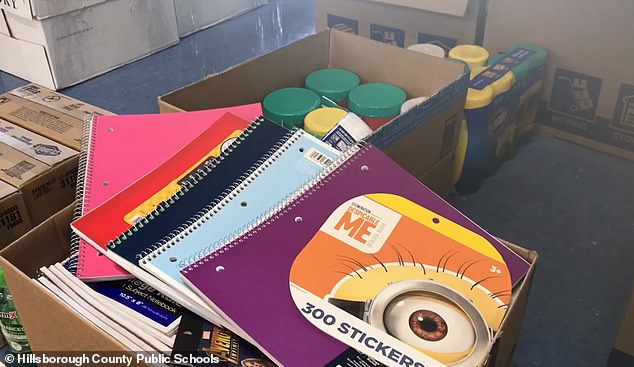 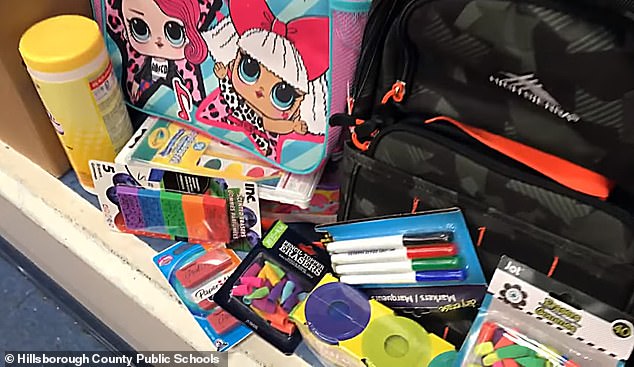 Supplies: First Grade teacher Kelli was praised by staff and parents on social media for gifting the supplies, pictured

‘Wow!! So thoughtful & kind of the both of them,’ a commentor wrote.

‘Truly amazing! What a gift to these children and a gift this couple will keep in their hearts forever knowing they made a difference in someone’s life,’ said another.

Those whose children had once been taught by Kelli also weighed in to personally applaud her.

‘She was my sons teacher at Roland Park and she is beyond amazing,’ one mom said, while another agreed, ‘She’s an amazing teacher and person!’

On Twitter, the school district also said, ‘We are so thankful for their generosity, partnership and willingness to put our students first’. 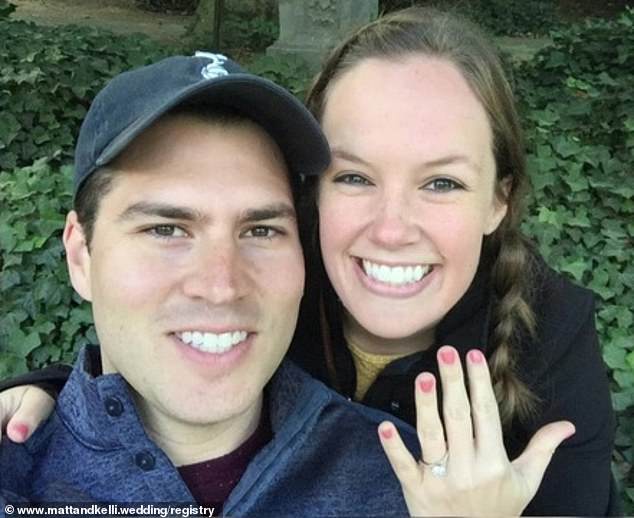 Generous: The kind couple wed in June, and are excited to prepare the backpacks before students start their schooling in September