An elementary school teacher is under attack in Arizona after she edited the Deceleration of Independence to include gender-neutral pronouns.

In her edited version of the historical document, the text reads ‘all humans are created equal’ and ‘Governments are instituted under humans,’ with ‘humans’ replacing the word ‘men’ on both instances.

That decision to not sit well with Elizabeth Vaillancourt however, whose young son was in the woman’s class at Salk Elementary in Mesa.

She took to Facebook last week to voice her anger at the teacher’s actions and later decided to remove her son from the class.

‘Zev’s teacher has this hanging in the classroom can anyone guess what’s wrong with this picture?’ wrote Vaillancourt.

She attached a photo as well that showed the teacher’s mocked up version on which she used a dry erase marker to mark an ‘x’ throw ‘men’ and write in ‘humans’ on a laminated copy of the document.

Not so self-evident: A 4th grade teacher at Salk Elementary in Mesa, Arizona edited the Declaration of Independence to read ‘humans’ instead of ‘men’ in the historic document (above) 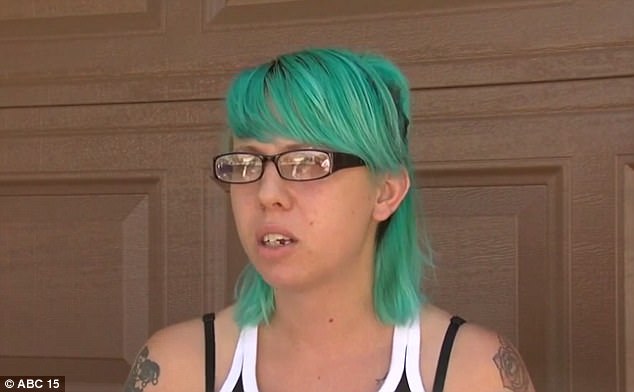 Mad mom: That move immediately drew the ire of a number of parents, most notably Elizabeth Vaillancourt (above), whose son was in the woman’s class

Vaillancourt was not the only one who was upset by the teacher’s gender-neutral edit either, with a number of people saying that the woman should be fired by the school.

‘I’m soooooo p***ed about this whole situation!!! She needs her teacher cert revoked!!!’ wrote one woman.

‘How are these idiots teaching children today. Fire the teacher,’ stated another individual.

And one person commented on Vaillancourt’s post saying: ‘I think that is so wrong , I would write a letter to the president of the United States and ask him how he feels about it.’

Of the over 20 comments only one person defended the teacher, writing: ‘Nothing is wrong with it. We are humans. Stop making a fool of your self.’

Vaillancourt was then back at it on Wednesday after doing an interview with ABC 15, the station that was the first to report the story.

‘This is not up for debate I am trying to raise awareness for those like myself who agree and see the problem with what the teachers doing for those of you who did not get that far what she is doing is indoctrination you may be alright with her doing this but it is against board and school policy so therefore she was in the wrong.’

She then went on to make more claims about the teacher’s behavior which she deemed as inappropriate.

‘This teacher also felt it was “A teachable moment” when she shared with the class that she attended a protest of our President Donald J. Trump,’ claimed Vaillancourt.

‘When I confronted the teacher she in fact believed this behavior to be within her rights.’

Vaillancourt then informed her followers the sign had bee removed after the school board weighed in on the matter, adding that her son was also out of the classroom.

‘I beg of you all for future generations to remain free, please beware of what is actually occurring in our schools,’ wrote Vaillancourt.

‘The school seemed much more upset about my face book posts, meant to inform the public, than what is happening in the class.’

She then closed out by stating: ‘I was told when we went to the school that they had another complaint. If so ,why had they not acted? Perhaps, turning a deaf ear? Let us pray not.’ 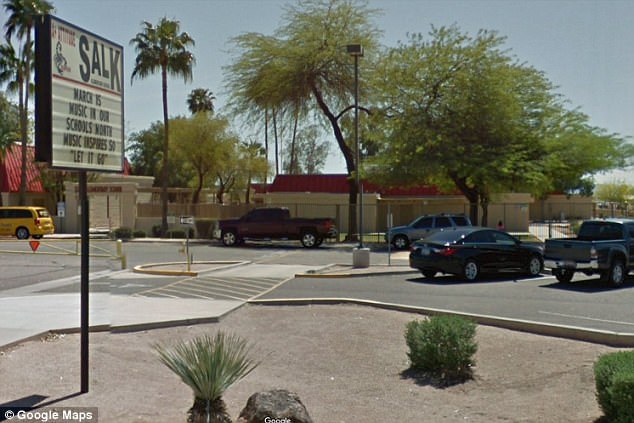 School days: The school board agreed with Vaillancourt about the edits to the Declaration and said in a statement that the teacher’s actions were against school policy (Salk Elementary above)

Mesa Public School also released a statement about the teacher’s gender-neutral edit and her decision to share with her students that she went to a President Trump protest.

‘It should be recited as written, and not modified in any way,’ read the statement about how the Declaration should be read by students each morning after the Pledge of Allegiance.

‘School administration, when learning of the alteration to the text, provided feedback and guidance to the teacher to restore the document to its original format.’

The President Trump rally was then addressed, and given a bit more context then Vaillancourt had included in her post.

‘There is not a specific reference in policy to the discussion of political beliefs by a teacher in a classroom, however in practice the district does not allow teachers to share their political views with students,’ read the statement.