Teacher is grading exam papers while receiving an IV drip

A school teacher was filmed marking examination papers at a hospital while receiving an intravenous therapy on her hand at late night.

The scene, captured by onlookers on mobile phone, shows the female patient sitting at the corridor in a hospital and marking test papers on a tiny table.

Mr Liang who filmed the footage, said he was moved to see the teacher being so hardworking despite having an IV drip on her left hand.

Mr Liang told Pear Video that he saw the teacher in Jinan Jiaotong Hospital, Shandong Province, at around 10:00pm on January 22.

‘I saw her at the Emergency Room last night. I looked at her bag and it should be from a primary school,’ said Mr Liang.

The school teacher has touched Mr Liang’s heart as he felt the teacher was being very caring and trying to mark her students’ examination paper at night.

He added that he did’t stop to talk to her. 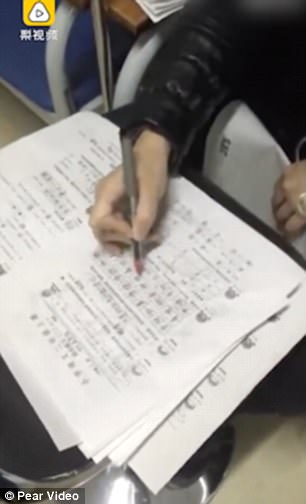 A school teacher is seen marking her students’ examination papers at a hospital in China (left). Onlooker notices that she could be working at a primary school (right) 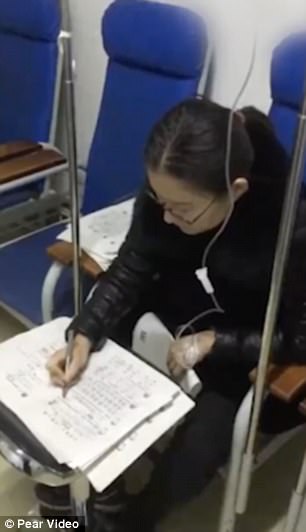 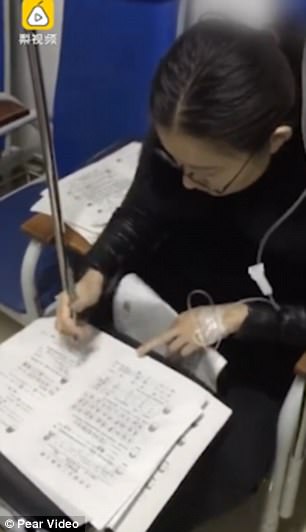 According to Mr Liang, the teacher is still working at around 10pm while receiving an intravenous therapy at the A&E department