Teacher suspended after casting two children of color as slaves i

A teacher has been suspended from a Connecticut school after casting two children of color as slaves in a school play, who would be whipped by other children as part of their role.

Carmen and Joshua Parker, the parents of a fifth-grade biracial 10-year-old girl, are furious that their youngster was cast as a slave in a school play at West Woods Elementary School in Hamden.

‘I was trying to make sense of the whipping of the children, the children were going to be whipping the slaves ,’ said Joshua Parker, the girl’s father. 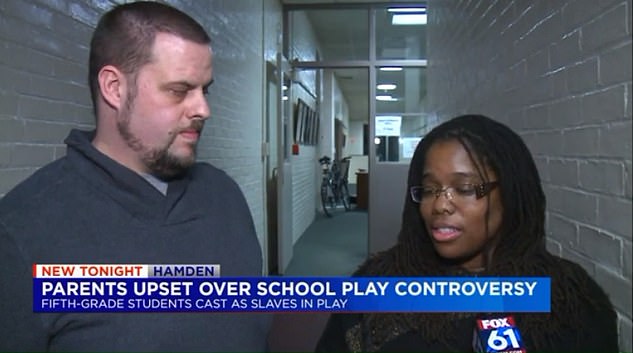 Carmen and Joshua Parker (pictured) are the parents of a fifth-grade biracial 10-year-old girl, who was cast as a slave in a school play at West Woods Elementary School in Hamden

The girl’s mother, Dr Carmen Parker, added: ‘The scene starts with nameless slaves one and two getting pushed towards the ship by the slave owner and a child is acting as the slave owner.’

The teacher involved was suspended from the school in light of their complaint but the couple feel it’s not enough.

They said they are hoping for a ‘plan of action’ as they feel the school district doesn’t respond appropriately to racist incidents. 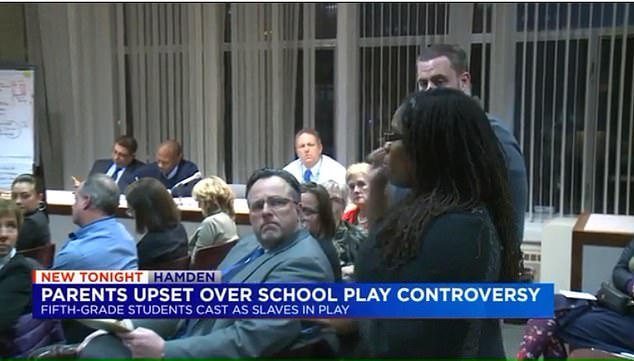 Dr Carmen Parker can be seen talking during a meeting of the Hamden School Board last night, where she asked for a plan of action with regards to addressing racism in the district

Dr Parker said her problem was not with the play itself, but recommended diversity training for all educators.

She added that the play missed the point about civil rights, focusing too heavily on the events of colonialism instead.

After the discovery that their 10-year-old had been cast as one of the slaves, they took the issue to the school principal. They said all the help he gave was a four-minute phone conversation.

The other child cast in the similar role was also a child of color, according to Dr Parker.