Toby Belfield, pictured, principal at £34,500-a-year Ruthin School in Wales, wrote in an email to staff that he ‘strongly disapproves’ of pupils being in romances with each other

A leading public school headteacher has warned pupils he will give them a ‘worse reference’ for university – if they have a sweetheart in school.

Toby Belfield, principal at £34,500-a-year Ruthin School in Wales, wrote in an email to staff that he ‘strongly disapproves’ of pupils being in romances with each other.

He warned a list of sanctions against would-be school sweethearts – including expulsion and marked-down uni references.

Mr Belfield said anyone in year 11 or the lower sixth form usually aged 15 to 17 would be expelled if found to have a boyfriend or girlfriend in school.

In his email to staff, Mr Belfield said: ‘School is not the place for romantic relationships – ever.

‘I STRONGLY disapprove of any boyfriend/girlfriend relationships – and it will ALWAYS affect any university reference I write (meaning – any student in a relationship will definitely get a worse reference from me).

‘Relationships can start at university – not at Ruthin School.

‘I will be talking to staff and, as in previous years, I will put together a list of any student with a boyfriend or girlfriend. These students – if in L6 (lower sixth form) or F5 (year 11) can expect to find new school in September.

‘There are plenty of students that wish to attend Ruthin School without the diversion of romance – and these students can replace those students whose focus is on bf/gf relationships.’

Mr Belfield is headteacher of the ancient fee-paying school in Ruthin, North Wales, which is ranked number 12 in the Times 2017 A Level League Tables.

In February last year leaked emails to staff showed him ranting about female pupils wearing skirts that ‘look like they are going to a nightclub’ and ‘pathetic students pretending to be ill’, after looking for ways to dismiss students whose parents had already paid their fees. 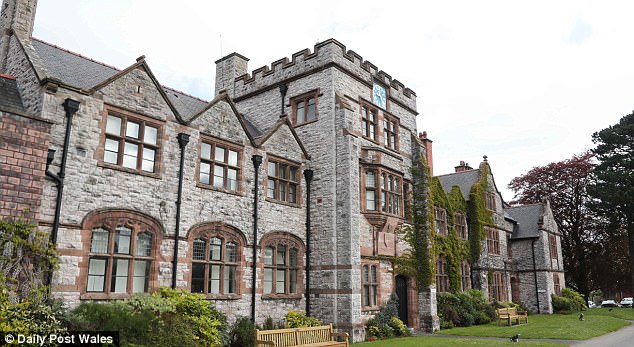 Mr Belfield is headteacher of the ancient fee-paying school in Ruthin, North Wales, which is ranked number 12 in the Times 2017 A Level League Tables

In the past has branded Labour’s education system in Wales as ‘one of the weakest in the world’ – and attacked its insistence on forcing all children to learn the Welsh language.

Mr Belfield, principal of the 700-year-old Ruthin School, said Welsh education is ‘not fit for purpose’ and is leaving children ‘educationally weaker’ than their English counterparts.

Mr Belfield laid the blame at the doorstep of the Labour-controlled Labour Government who have devolved control of education.

Speaking today after the leaked emails were published, the head teacher said he would not ‘hamper students’ chances’ if they were in a relationship and achieving top grades.

He added: ‘My email was a generic one to all students, to try to dissuade them from being in a teenage relationship.’

‘Pupils will not be summarily expelled for being in a relationship. They will be given the opportunity to review their current romantic situation, and my belief is that they (and their parents) will put their education first.’

Mr Belfield also admitted he had found romance in school in his day, adding: ‘But I am now 45, and getting into top-ranking universities in 2018 is completely different, and arguably far more competitive, than in 1991.

‘This is the primary objective of the school – to enable them to fulfil +their academic potential and go to the best universities in the world.’