A teacher was awarded almost a quarter of a million pounds in compensation after falling while putting up a class display, figures show.

The six-figure pay-out was among cases in which education workers were awarded settlements for accidents on school property.

They included almost £85,000 for a teacher who slipped on black ice, and £60,000 for another who fell on spilled food and liquid.

The data, released by teaching unions, shows the extent to which taxpayers’ money is being diverted into expensive pay-outs following incidents in schools.

Some of the payments were made for accidents while others were made to teachers who were assaulted by violent pupils.

In one case, an academy worker was awarded nearly £50,000 after being attacked by a teenage girl who had been told to stop chewing gum.

And a trainee teacher was given a £35,000 settlement following claims she had been dismissed or discriminated against because of her pregnancy.

One union boss warned they are seeing a significant increase in complaints from members about racist, ageist or anti-disabled treatment.

One of the highest pay-outs was a settlement of almost £250,000 given to a teacher in the Eastern region of England, who lost her balance and fell while using a table and chair to put up a display by her class.

The teacher suffered a fracture in the fall, which also aggravated the symptoms of her foot fibromyalgia and depressive illness, according to her union – the National Education Union (NEU).

The injuries prevented the teacher from working and her contract was terminated.

A case was brought against the local authority for failing to provide proper work equipment.

Another teacher from the Midlands also received £250,000 after being subjected to continuing incidents of violence and poor pupil behaviour over four years.

The local authority failed to put an effective system to manage behaviour in place or carry out a formal risk assessment, according to the NUT.

This led the member’s ‘steadily worsening health and eventual breakdown’, the union said, and a claim was brought that ended in the six-figure settlement.

A third NUT case involved an academy worker in the North West who suffered ‘a prolonged assault by a female teenage student, who flew into a rage when the member asked her to stop chewing gum before lesson time’. 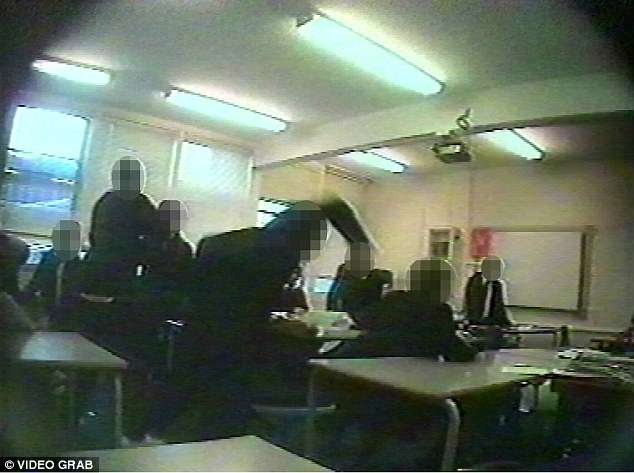 She suffered blows to the stomach and bruises to her hand, as well as post-traumatic stress disorder and depression, and was awarded compensation totalling £47,837.94.

The NASUWT union fought a discrimination case involving a 26-year-old trainee teacher from London who the teaching union said was ‘forced out’ after becoming pregnant.

Her working relationship with the head teacher deteriorated after she became ill during her pregnancy and was subsequently told to choose between becoming a teaching assistant, a learning support assistant, or being dismissed, the union said.

Her employer subsequently settled with a £35,000 payout after the union claimed she was dismissed or discriminated against because of her pregnancy.

NASUWT general secretary Chris Keates said: ‘The scale of discrimination and prejudice is deeply disturbing and it is likely that this is only the tip of the iceberg.’

Figures showed the union successfully secured more than £16 million in compensation payouts for its members during the last year.

The cases include a 55-year-old teacher who received a settlement just short of £85,000 when she slipped on untreated black ice at her classroom door, after her employer’s insurers initially refused to negotiate compensation.

Elsewhere a 53-year-old teacher from Essex was awarded £60,000 after she slipped and fell on a food and liquid spillage as she made her way from a science lab.