A teacher who cheekily invited her pal’s celebrity crush to marry her on Twitter uncannily had her brazen request granted – but sadly passed away before she could see the couple tie the knot.

Amber Morris knew her best friend Alex Curry, 32 from Chelmsford in Essex, had harboured a crush on comedian Glenn Wool for years, and tweeted the star inviting him to consider marrying her pal as a ‘birthday present’.

She tweeted: ‘Excuse me, @GlennWool, it’s my best friend @AlexandraCurry’s birthday soon, and I was hoping you might consider marrying her as a present?’

Miraculously the shameless request back in 2015 paid off, as Alex and Glenn began dating soon after, had baby Atticus and tied the knot on May 20 this year.

But tragically Amber never got to see her friend walk down the aisle, because she died after catching dengue hemorrhagic fever while working abroad, seven months after setting the pair up.

Canadian comedian Glenn Wool and Alex Curry (both centre), from Essex, married in May this year, after her friend Amber Morris set them up via Twitter 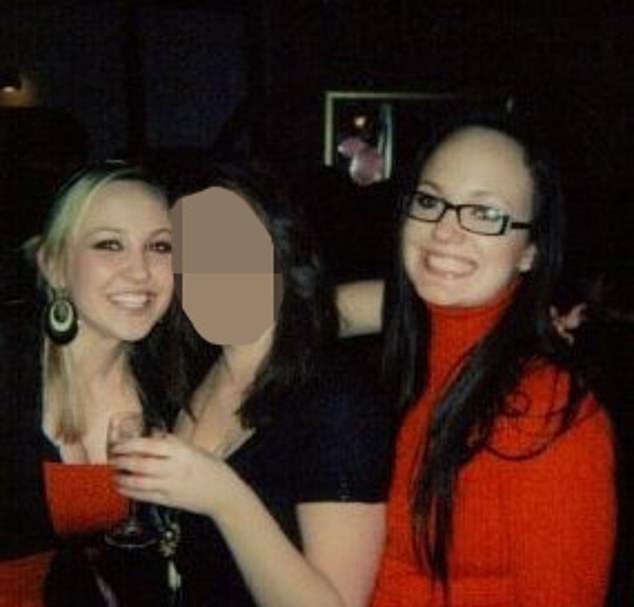 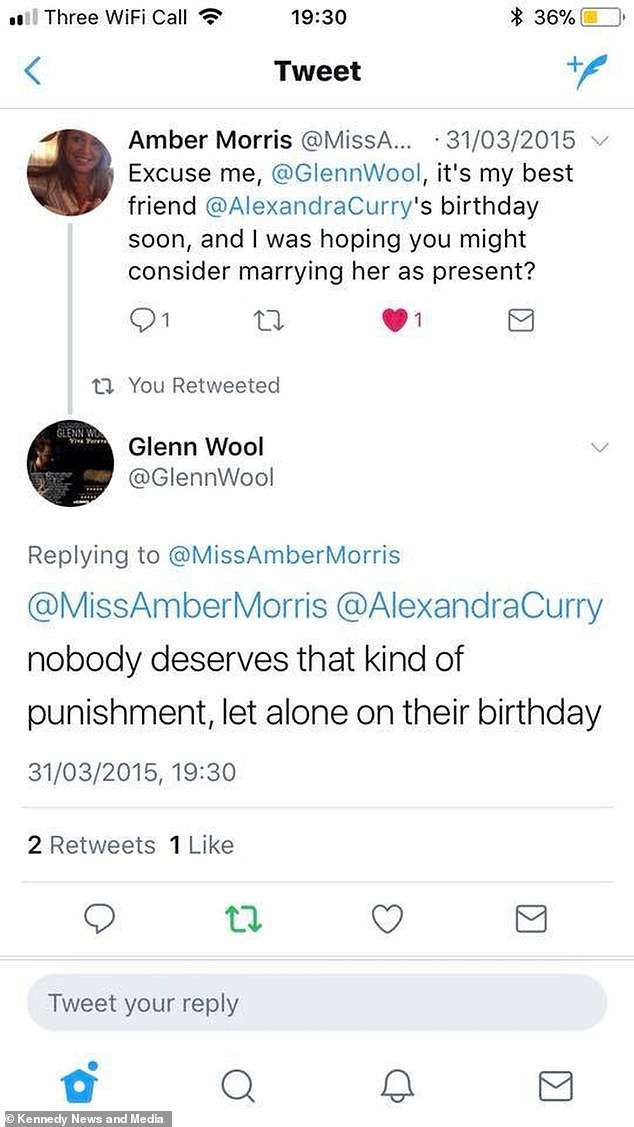 Amber made the bold move and asked Glenn to marry her pal on Twitter in a hilarious post.  But her cupid skills worked as Alex, 32, and Glenn, 44, started dating and married years later

Alex, 32, and 44-year-old Glenn honoured her memory by marrying at the church she was buried at and laying wedding flowers on her grave.

‘Amber was my rock and my soulmate from when we were three,’ Alex said.

‘I feel that the universe got me Glenn to look after me when she couldn’t be there anymore.

‘We decided to get married at the church where she was buried so that she would be near and after the ceremony we took a moment to put a bouquet down on the grave. 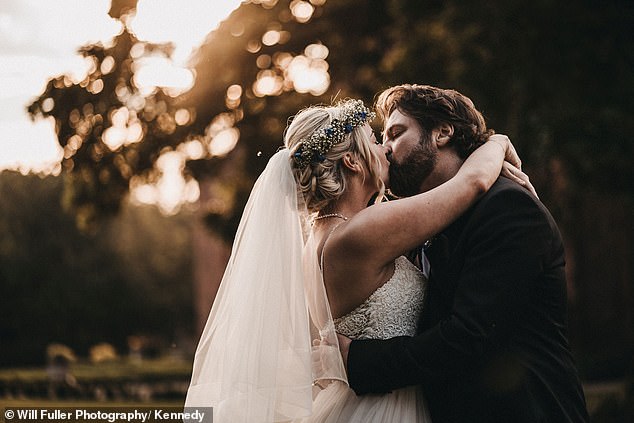 Alex and Glenn Wool married in her hometown of Essex after being introduced four years earlier. Although her BFF was not there to see them exchange nuptials they believe she was watching over them 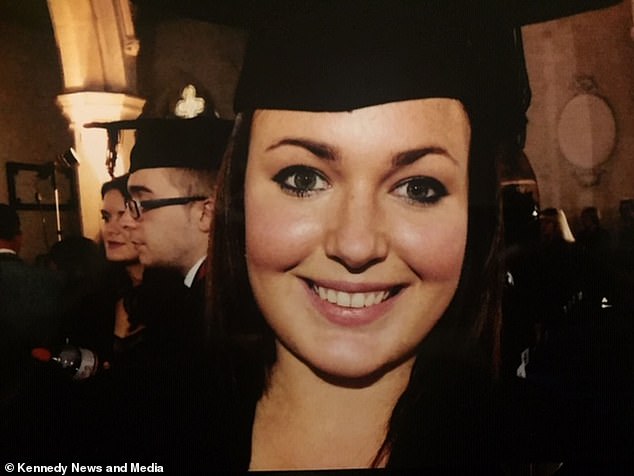 Alex reached out to Glenn on Twitter asking him to marry her as a birthday present, but sadly contracted dengue hemorrhagic fever just months after connecting the two 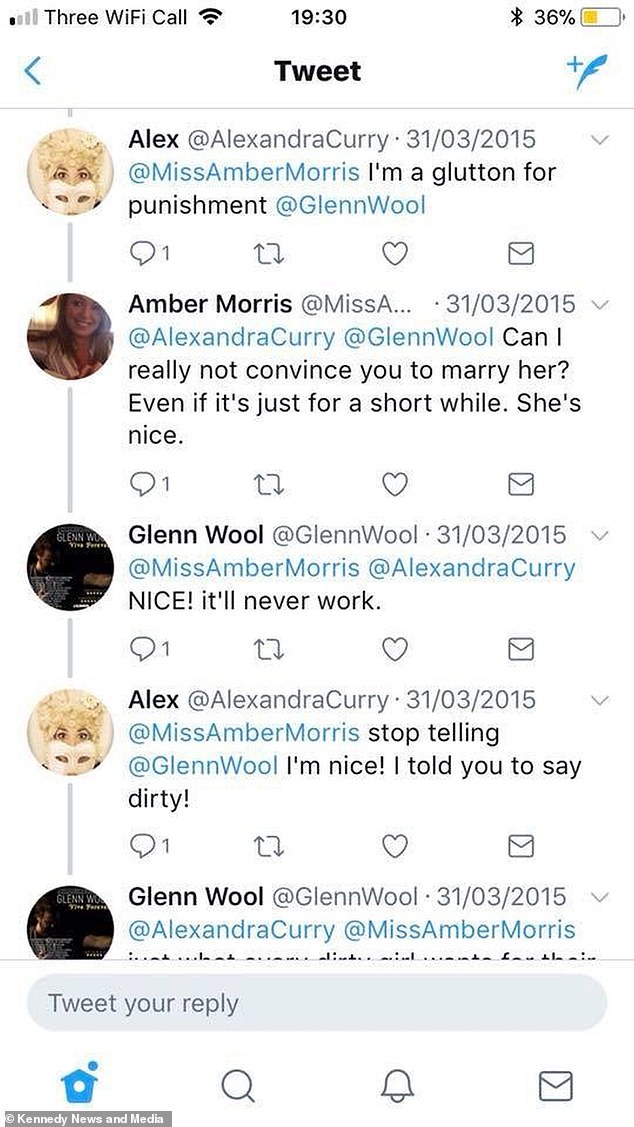 Alex and Glenn flirted up a storm on social media after Amber connected the two together, but it wasn’t until Glenn browsed through his now wife’s pictures he agreed to go on a date with her

‘It was forecast to rain on our wedding day, but we had a beautiful sunny day. To me, that was her making the sun shine for us.

‘It’s bittersweet, but I know she would be happy that we’re as we are.’

The unusual love story began back in March 2015 when best pals Alex and Amber, who was living and working in Thailand, were enjoying a catch-up on the phone.

Alex moaned it was unlikely she’d marry after a string of terrible Tinder dates but admitted she was besotted with ‘sexy gruff-voiced’ comedian Glenn Wool.

Minutes after Alex revealed her comedy crush, her phone pinged and she discovered Amber had publicly messaged the funny man asking if he’d consider marrying Alex as her birthday present. 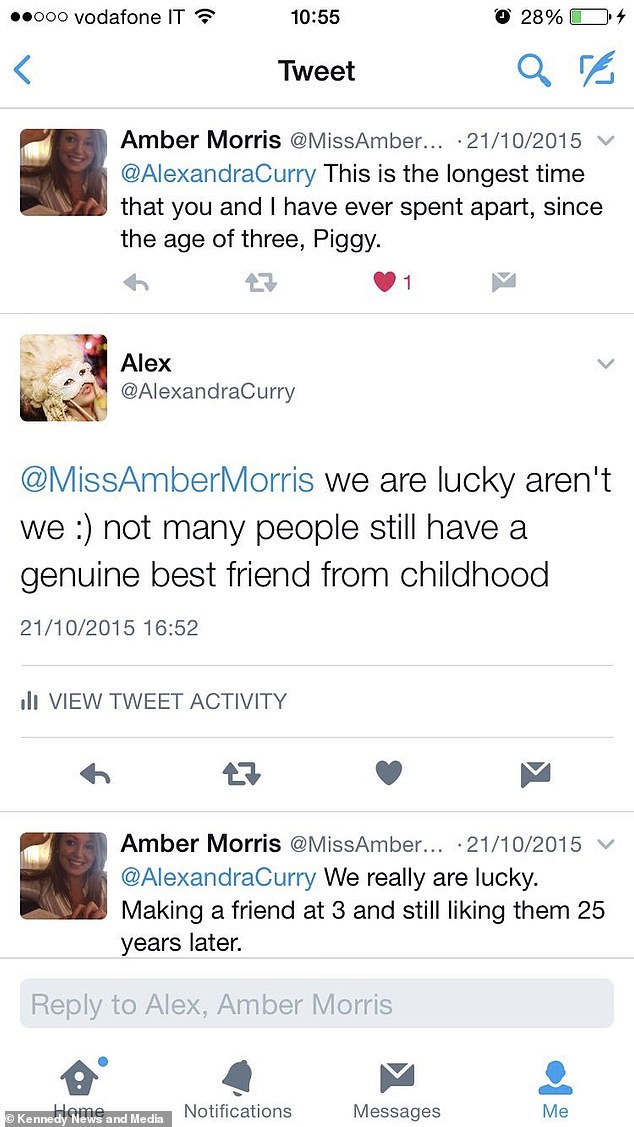 Amber and Alex boasted a strong friendship spanning over 25 years. The duo met when they were just three years old, as Amber detailed in a previous tweet

This triggered a series of flirty messages that self-professed fan girl Alex ‘freaked out’ over, likening it to an encounter between a celebrity and an uber fan.

Alex said: ‘We laughed about it but I didn’t think he would see it as he has so many followers – plus I thought I couldn’t be the only crazy female one.

‘When he replied I couldn’t believe it, I remember thinking “oh my god, what do I do?”.

‘I was completely freaking out – it was like if Justin Bieber had tweeted a Belieber.’

Glenn responded to Amber’s original tweet writing: ‘@MissAmberMorris @AlexandraCurry nobody deserves that kind of punishment, let alone on their birthday.’ 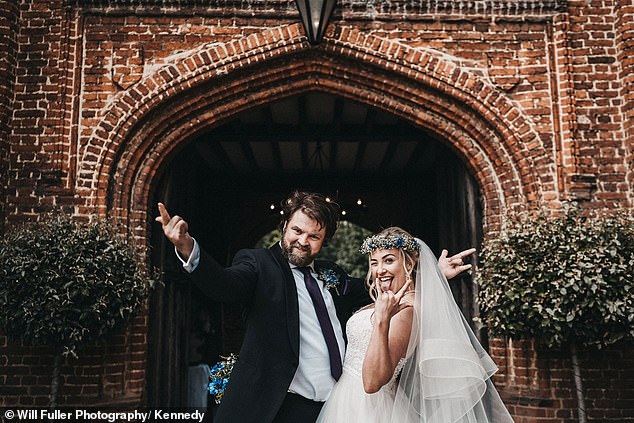 Alex has admitted she ‘completely freaked out’ when Glenn replied to Amber’s tweet, but he now won’t let her live down the moment 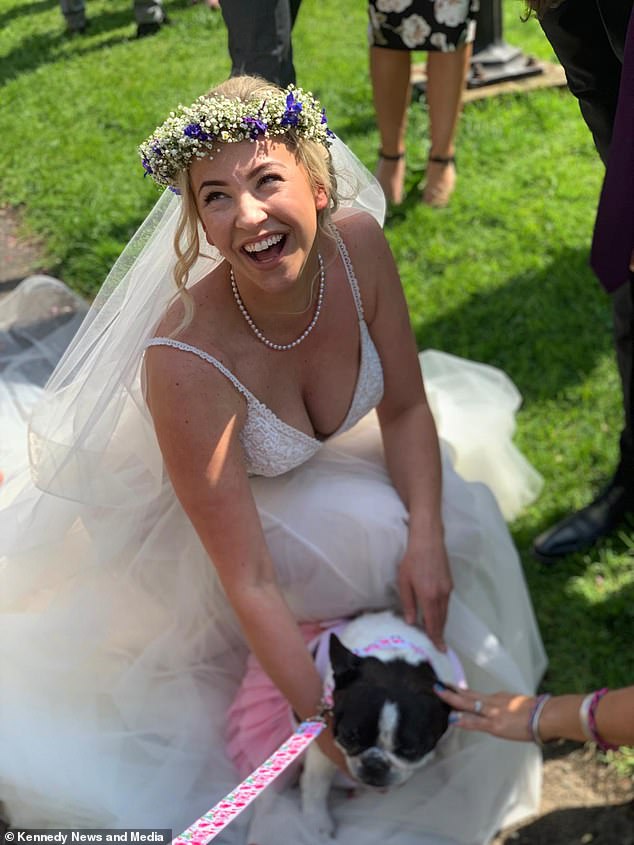 Alex never thought she would ever meet Glenn let alone marry him and start a family with him, after listening to his podcast 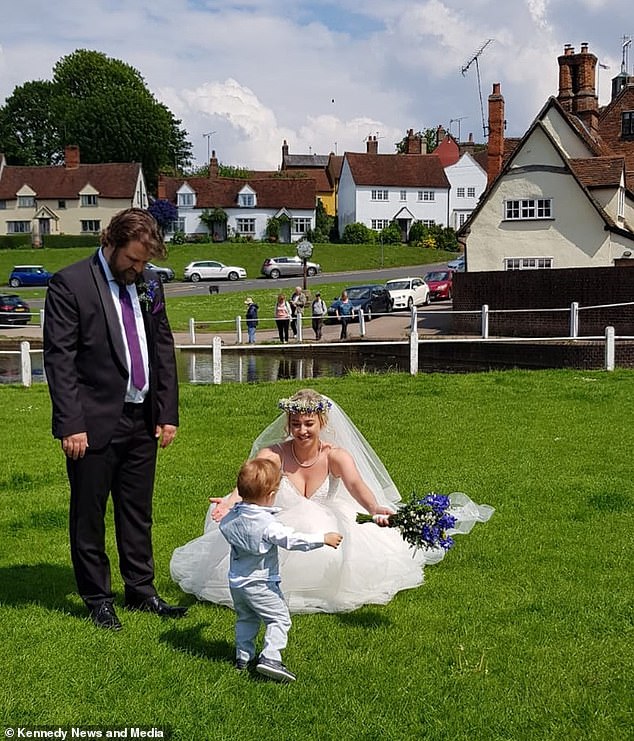 Glenn decided to move from Canada to the UK to be with Alex, but decided to tie the knot at  Saint John the Baptist in Finchingfield, Essex, where they first met 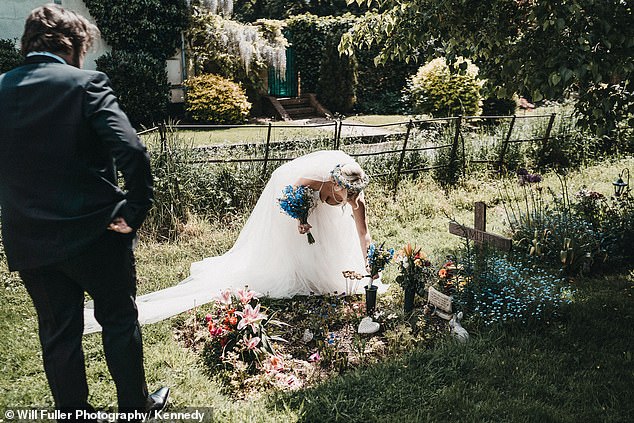 Although Amber was not at their wedding, Glenn and Alex paid tribute to her by getting married at the church she was buried and took time out of their special day to lay flowers on her grave

‘Glenn doesn’t let me live it down – especially now that I’m mother to his child.

‘At the time I just thought ‘he’s Canadian, nothing more will come of it’ but I was delighted with the small amount of interaction I’d got.’

Another friend took Alex to go and see Frankie Boyle at Soho Theatre in London as a birthday present.

Comedy fan Alex watched open-mouthed as the warm-up act walked on stage – and it was Glenn. 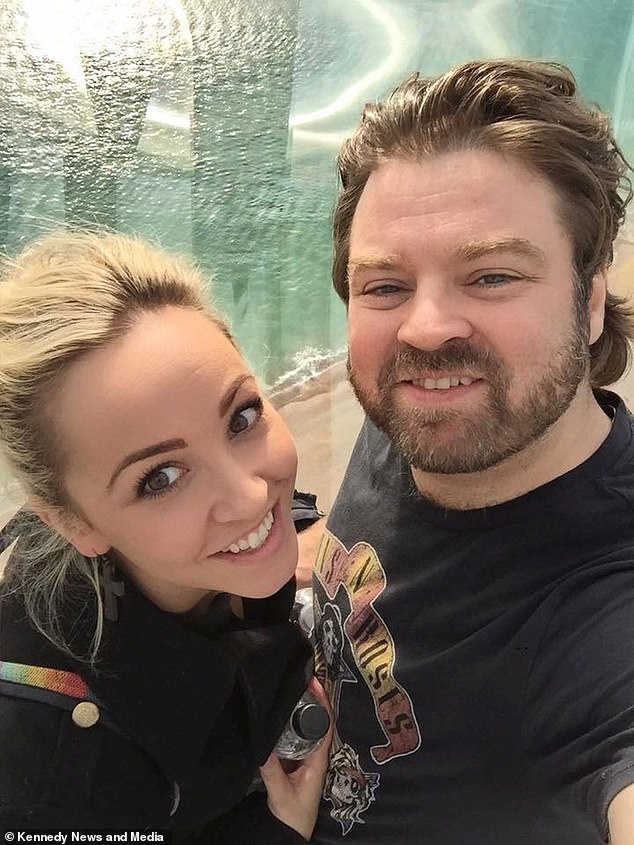 Alex and Glenn’s romance blossomed after the exchange of tweets, as she saw him perform on stage and reached out to him on social media once again 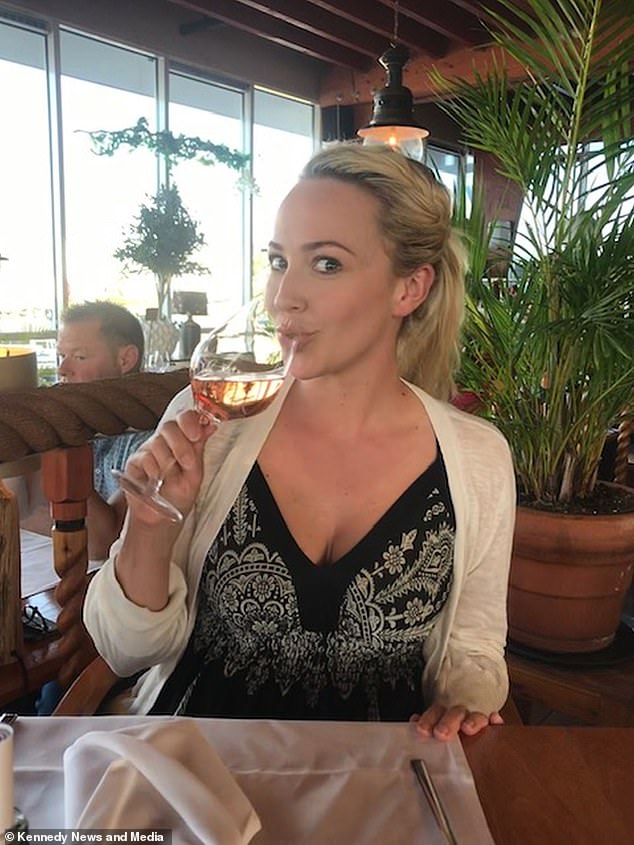 Alex was overwhelmed when she praised Glenn for his witty performance, to which he replied admitting he wanted to go for a drink with her. The next day the pair went to the pub for their first date

Alex said: ‘As soon as I saw him I was thinking “oh my god he’s here, we’re in the same room, we’re breathing the same air”.

‘I was so excited when it turned out to be Glenn, having swooned over him since hearing their podcast.

‘After the show I tweeted him and said “what a nice surprise to see you as the warm-up act”.

‘He replied “I wish I’d known we could have gone for a drink”, and my head nearly exploded. 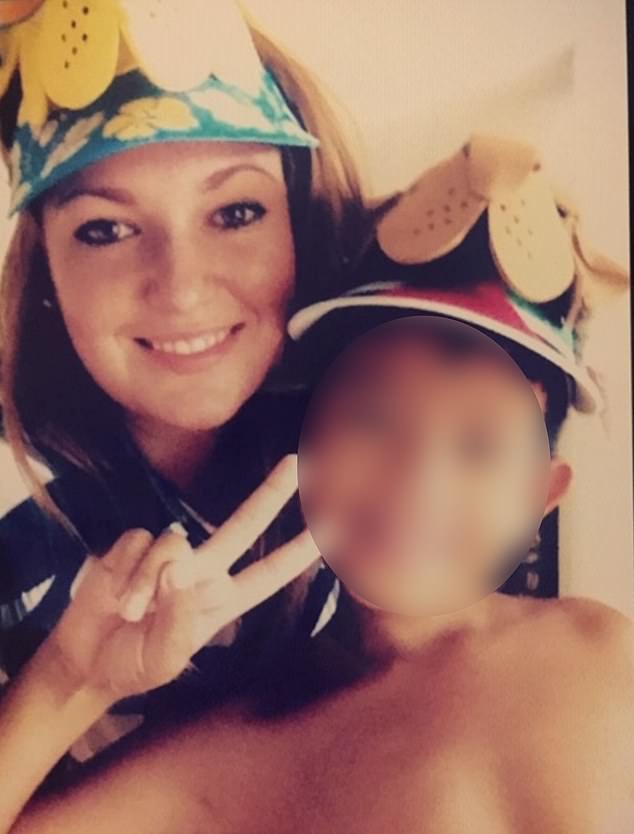 Amber never met Glenn as she was diagnosed with dengue fever shortly before he invited her on a trip to see Alex who was on holiday in Asia.  On Alex’s return to the UK her pal was in a coma and sadly passed away

‘The next day we went on a date to a pub in London where we had some cocktails and lots of chat.

‘It was completely bizarre meeting him, I felt physically ill on my way to meet him because I was so nervous.

‘It was very strange seeing someone whose voice I knew so well from following his comedy.

‘I had to pretend I didn’t already know all the stories he was telling me from having followed his stand-up for a couple of years.

‘We had a kiss at the train station when we said goodnight and the rest is history.’ 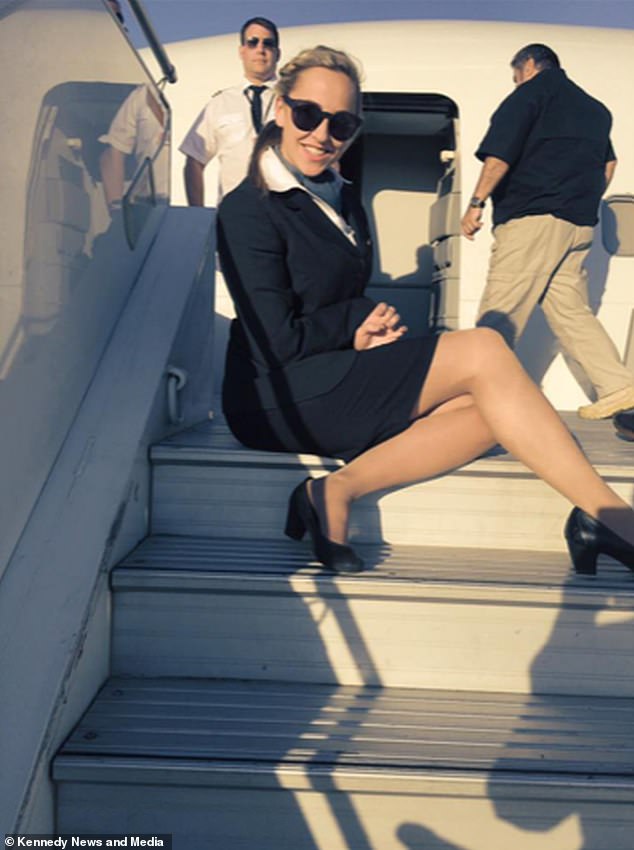 Alex and Glenn became inseparable and would fly across the globe to be with one another. During Glenn’s European tour he would fly to Stansted to see her, and on her days off she would jet to Edinburgh, Scotland, to be by his side

The couple became inseparable while Glenn was on the European leg of his tour – spending every free day they could together.

Alex said: ‘Whenever he was back in London during his tour we met up.

‘He does the Edinburgh Fringe Festival and on his days off he would fly down to Stansted to be with me.

‘On my days off I’d fly up to Edinburgh to be with him so we were very quickly spending all the time we could together.

‘There was one time right near the beginning he was sitting there in my house talking on loudspeaker to Frankie [Boyle].

‘I was stood there looking at him thinking, “oh no, what if I’ve just been in a car crash while listening to the podcast and I’m actually in a coma and none of this is happening?”. 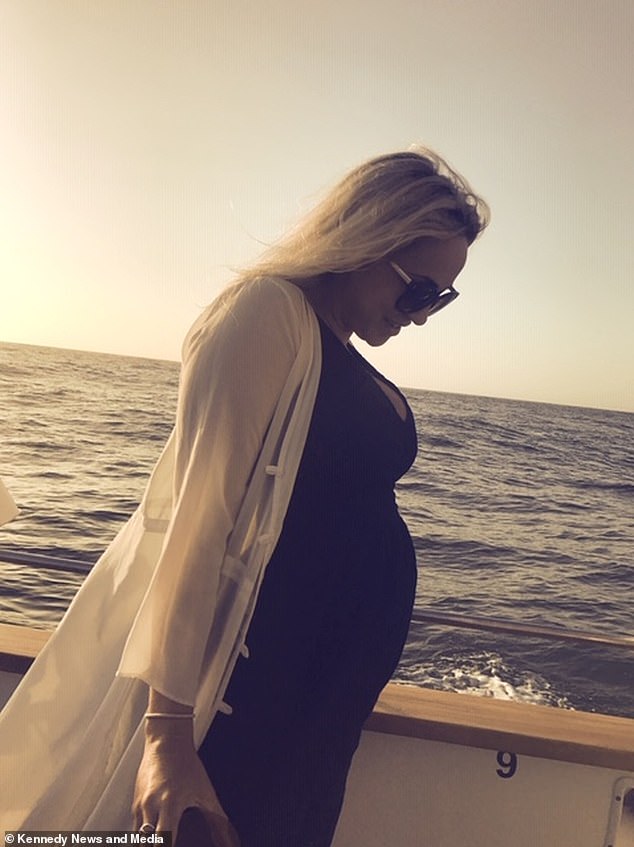 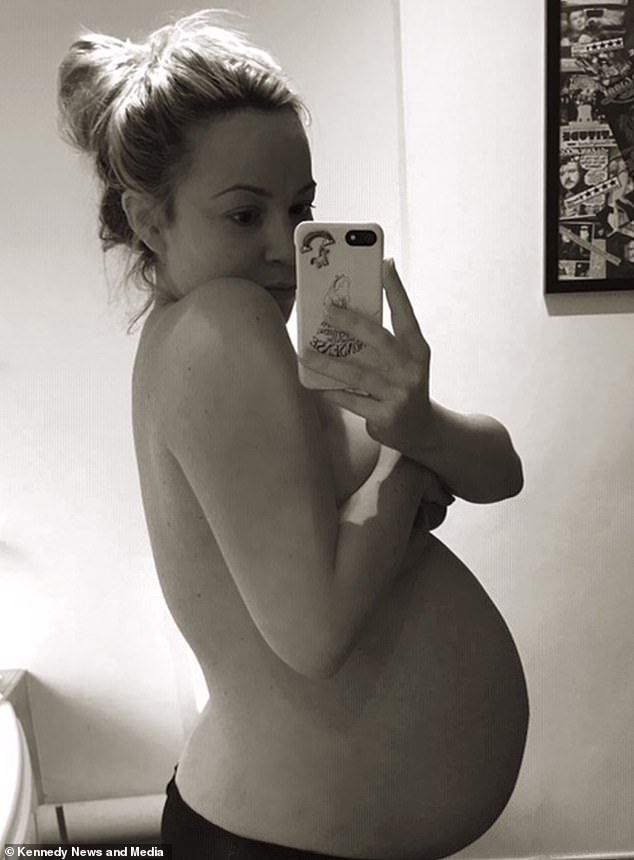 One year after Alex gave birth Glenn decided to take their relationship to the next step and proposed to her, although the air hostess has revealed she dropped a lot of hints

In October 2015 Glenn went on tour in Asia and invited Alex to join him so they could meet up with Amber in Thailand – but sadly they never got the chance.

‘We were both really excited to go and see her, but as I was leaving Heathrow Amber texted me to say she wasn’t very well, and had to go to hospital to be tested for dengue fever or tropical influenza.

‘I didn’t think much of it and thought I’d still get the chance to see her, but unfortunately it was dengue hemorrhagic fever.

‘By the time I got there she was in a coma and about two weeks later the decision had to be made to switch off her machine. It was hideous.’

In November 2015 Glenn decided to relocate from Vancouver and move in with Alex in Bishop’s Stortford in Hertfordshire. 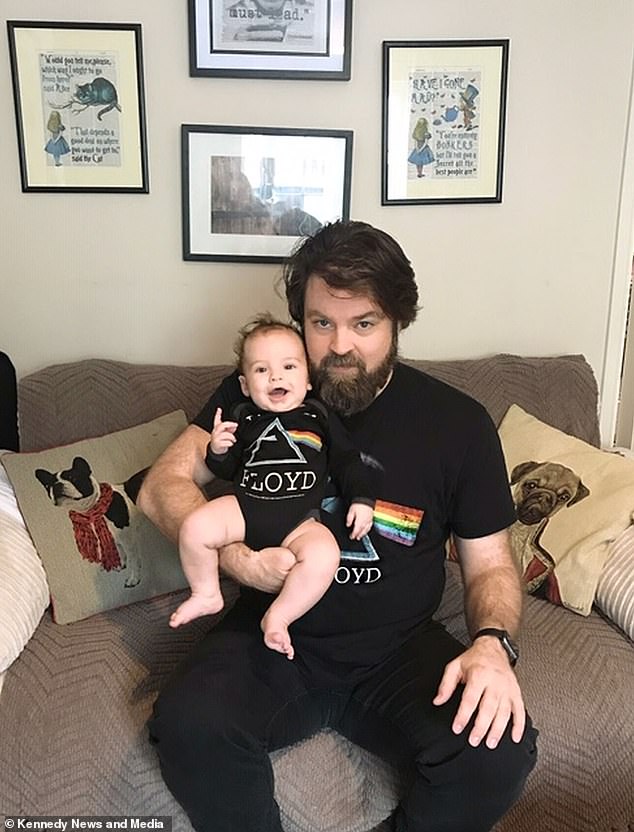 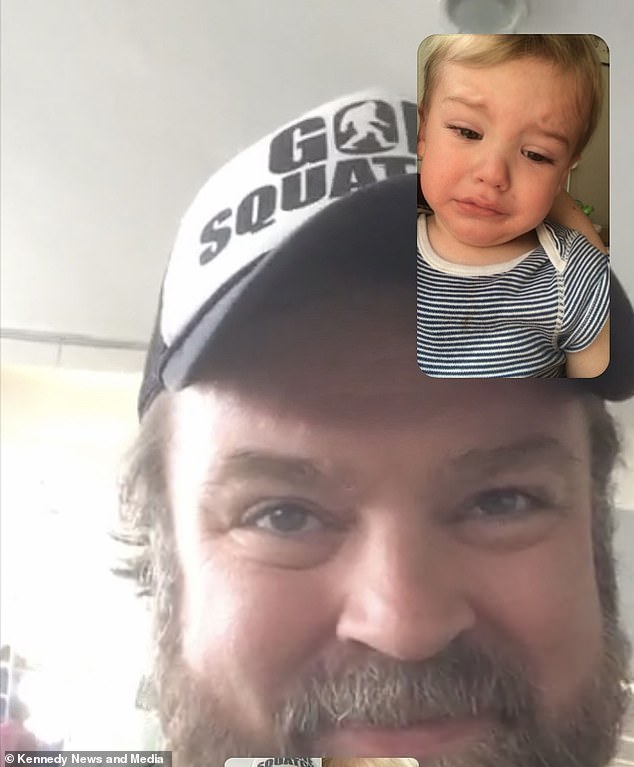 Alex said: ‘It was definitely his idea, he said he missed me too much when we weren’t together, and he made it seem the most natural and obvious thing to do.

‘Obviously I was delighted, but was trying to act casual about it.’

The couple happily lived together and welcomed baby Atticus, now 18 months old, in 2017.

Alex said: ‘He finally proposed to me last May after me dropping some fairly unsubtle hints.

‘I had imagined being proposed to in these wonderful, romantic and fabulous ways but Glenn is a 44-year-old road comic.

‘I think it was after a couple of gin and tonics while watching Gogglebox, he just said it. 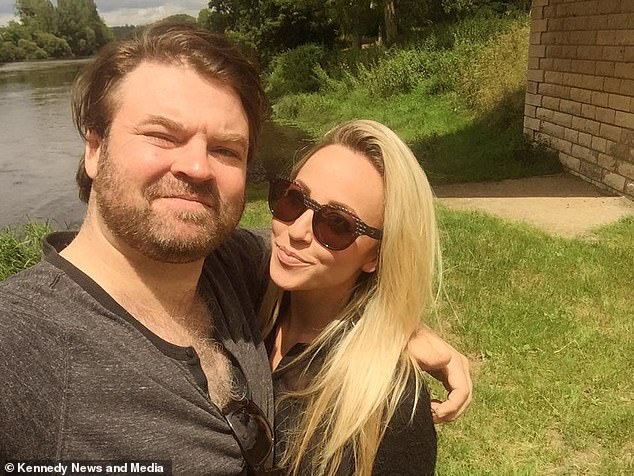 Alex recalled the moment Glenn proposed to her, and has revealed it was not quite the way she imagined. She had dreamed of a romantic proposal, but was asked to be Glenn’s wife over a few G&Ts 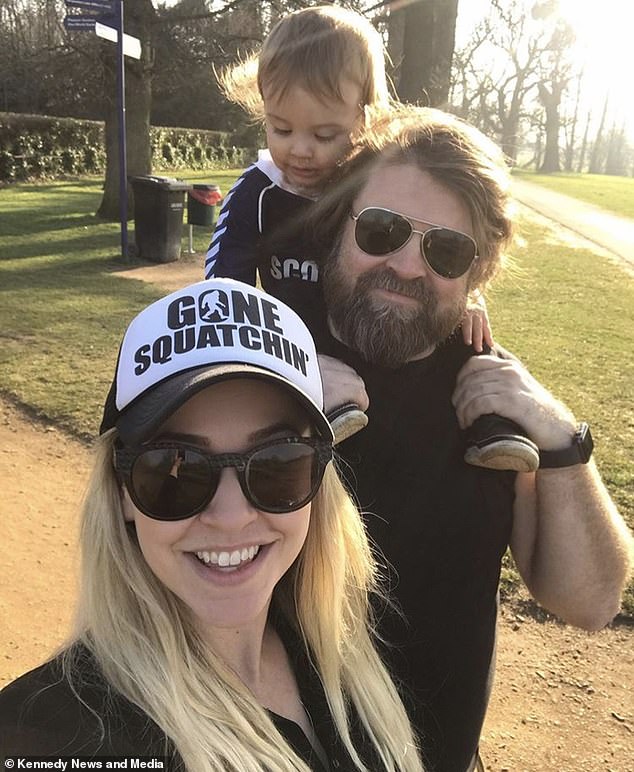 Alex and Glenn are ‘very happy’ together, despite going through the sad loss of friend Amber early on in their relationship

‘I’d already spoken to my parents and they were under strict instruction to not let Glenn buy a ring himself if he ever decided to propose.

‘He’s not a girly or a fashionable man so he just proposed with my mum’s ring and then another friend’s sister is a jeweller.

‘I told her the ring I wanted and she made it for me – a pear-shaped black diamond surrounded by little white diamonds.’

The couple married at Saint John the Baptist in Finchingfield, Essex, in the village where Amber and Alex met.

Alex said: ‘After all the sad things that happened Glenn and I are very happy. Just think, it all started with a tweet.’

Glenn said: ‘I got this tweet come through from a girl asking me to marry her friend as a birthday present.

‘It was the kind of tweet I wouldn’t normally respond to….but then I looked at her pictures.

‘That’s when I decided, actually in this case she’s in line for the full platinum Glenn Wool package.’