Female teacher’s aide, 33, ‘got her high school students drunk and encouraged them to have sex with each other at her home’

A teacher’s aide from Utah has been arrested after authorities say she plied her underage students with alcohol at her home and encouraged them to have sex with one another.

According to the Summit County Sheriff’s Office, suspect Ashley Ann Morgan, 33, then attempted to silence one of the victims by threatening to reveal personal information about the teenage girl, which she had learned from her time working at the Department of Child and Family Service.

Morgan, from Park City, was booked into the Summit County Jail Tuesday on charges of child abuse, witness tampering and contributing to the delinquency of a minor.

Utah’s teacher’s aide Ashley Ann Morgan, 33, has been charged with child abuse, witness tampering and contributing to the delinquency of a minor

She was released the same day after posting bail, reported Deseret News.

According to a statement from the sheriff’s office, the case began unfolding on September 20, 2019, when Morgan, who at the time worked as a teacher’s assistant at Wasatch County School District, invited three high school students – a girl and two boys – to her home to drink alcohol.

The 17-year-old girl later told investigators that Morgan encouraged her to have sexual contact with one of the boys.

The statement does not say whether or not the teens had followed through with the sexual activity at Morgan’s urging.

The teacher’s aide later sent a text message to the teenage girl, instructing her to lie to the police that she was never at her home and that nothing happened, according to the sheriff’s statement. 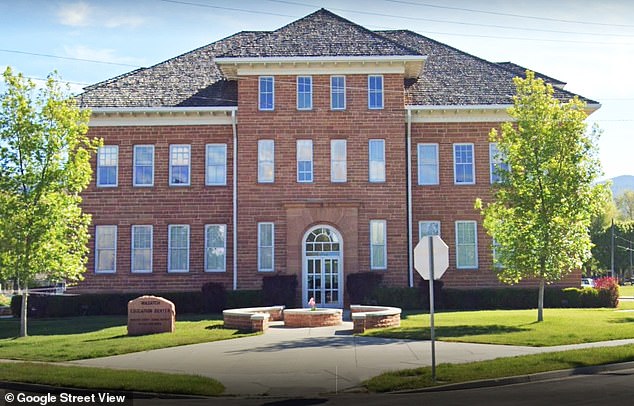 Morgan, an employee at Wasatch County School District (pictured), is suspected of inviting a 17-year-old girl and two boys to her home, plying them with alcohol and urging the girl to have sex with one of the boys

The woman also allegedly threatened to disclose personal information of the student that she had obtained from being a DCFS case worker if she ever told the authorities about what happened.

A spokeswoman with the Wasatch School District released a statement saying Morgan was hired last year after passing an extensive background check. In the wake of her arrest, the teacher’s aide has been suspended.

A DCFS representative said Morgan worked for the agency from 2016 to 2018, when she stepped down.