As the summer holidays come to an end, teachers preparing to get back into the classroom have revealed the secrets they really don’t want their pupils to find out.

Ranging from how they really mark homework assignments to wishing ill on their pupils, it’s no wonder they want to keep their innermost thoughts under wraps.

Meanwhile, others confessed to partying more than their pupils would expect, while one admitted that they’d dated several teachers in the staff room.

The candid revelations were made during a Reddit discussion, after one user questioned: ‘Teachers of Reddit, what is a secret you don’t want your students to know?’

In a similar vein, another said they sometimes pray for some students not to show up at class

Meanwhile, one very honest teacher admitted that the nicknames they have for their pupils could get them fired

Many of the responses included what they really think about their pupils – including those they don’t particularly like.

One very honest teacher wrote: ‘I have wished for kids to fall into comas, get mono, some non-lethal whatever illness, to keep them from my classes because either they were, A- so distracting it dragged the whole class down or B- just little jerks’.

Another explained how they came up with nicknames for their pupils to help them memorise their names – admitting they would probably get fired if anyone found out.

Other teachers said their secrets involved their own personal lives – including who they were dating.

Meanwhile, one teacher admitted that they don’t want their pupils to know they still live with their mother

One person wrote: ‘Before I started their French teacher I was hooking up with their Math teacher… A year before that I was with their Grade 6 teacher…’

Another added: ‘They think we don’t know how to party. I prefer it stays that way. Especially when I teach [the] grade that are old enough to go out.’

Some teachers were very honest about how they mark their pupil’s homework assignments – admitting they spend about 30 seconds grading each one. 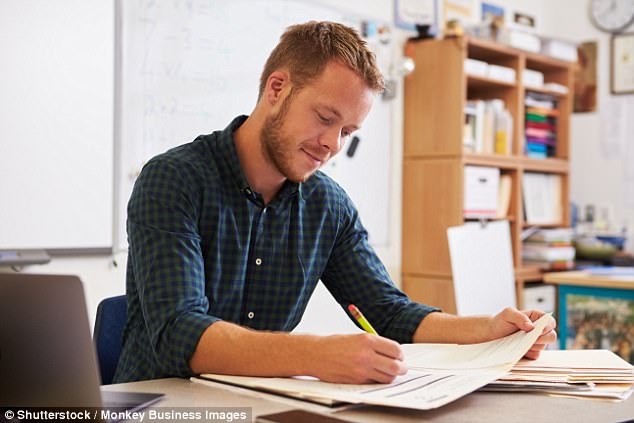 Meanwhile, some teachers reveal the lies they often tell their pupils. One tells theirs that they can tell they’re lying ‘by reading their tongues’

Another teacher revealed that when they pass wind in class, they blame it on the children