Great Britain’s Olympic heroes have landed back in London following a sensational Tokyo Games in which 65 medals, including 22 golds, were won.

Golden couple Jason and Laura Kenny were among the first athletes pictured at the top of the steps of the British Airways plane just moments after they touched down at Heathrow.

Earlier on Monday, British Airways released pictures of the Kennys showing off their medals en route back from Japan.

Joseph Choong, who won modern pentathlon gold on Saturday, was also on the flight as they prepare to return home to a hero’s reception.

All competitors were required to vacate the Olympic village within 48 hours of their last event finishing because of Covid-19 protocols, meaning a staggered return to the UK and preventing the triumphant Team GB homecoming seen after other Olympics. 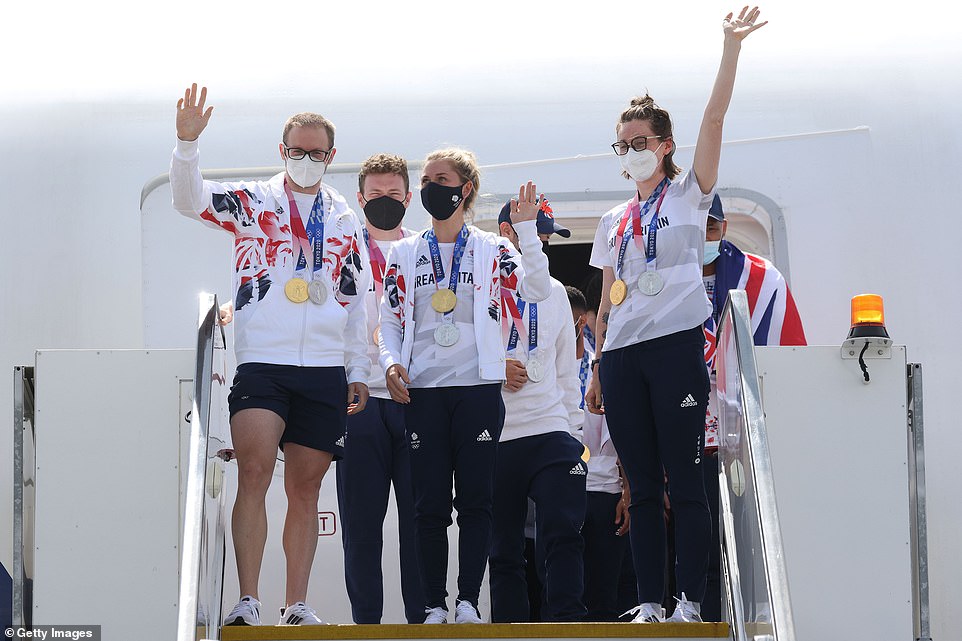 Cyclists Jason Kenny (left), Jack Carlin, (second left) and Laura Kenny (third left) were among the first members of Team GB to emerge from their plane after landing at Heathrow on Monday afternoon 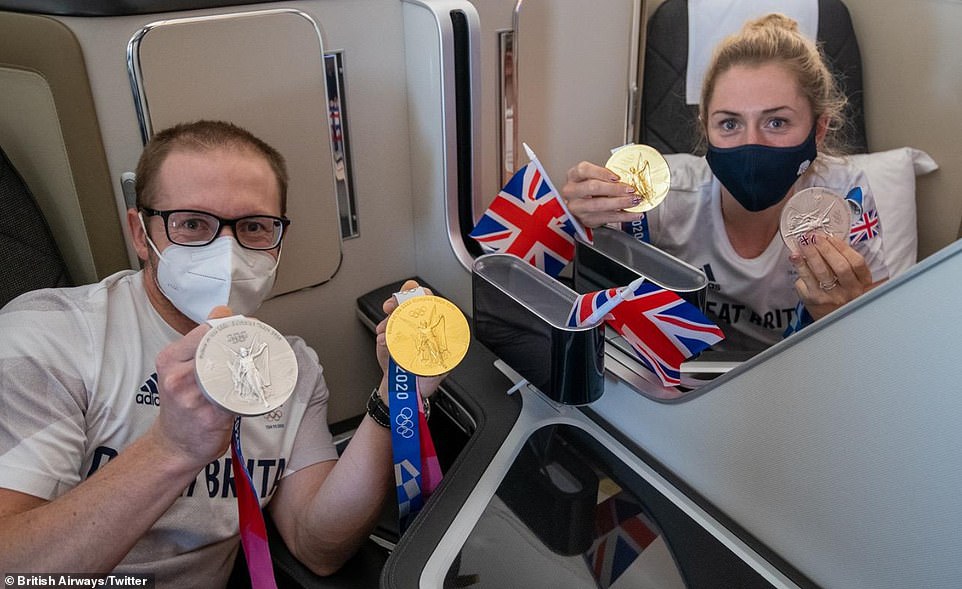 Earlier in the flight, British Airways posted pictures of Team GB’s golden couple as they showed off their medals from Tokyo 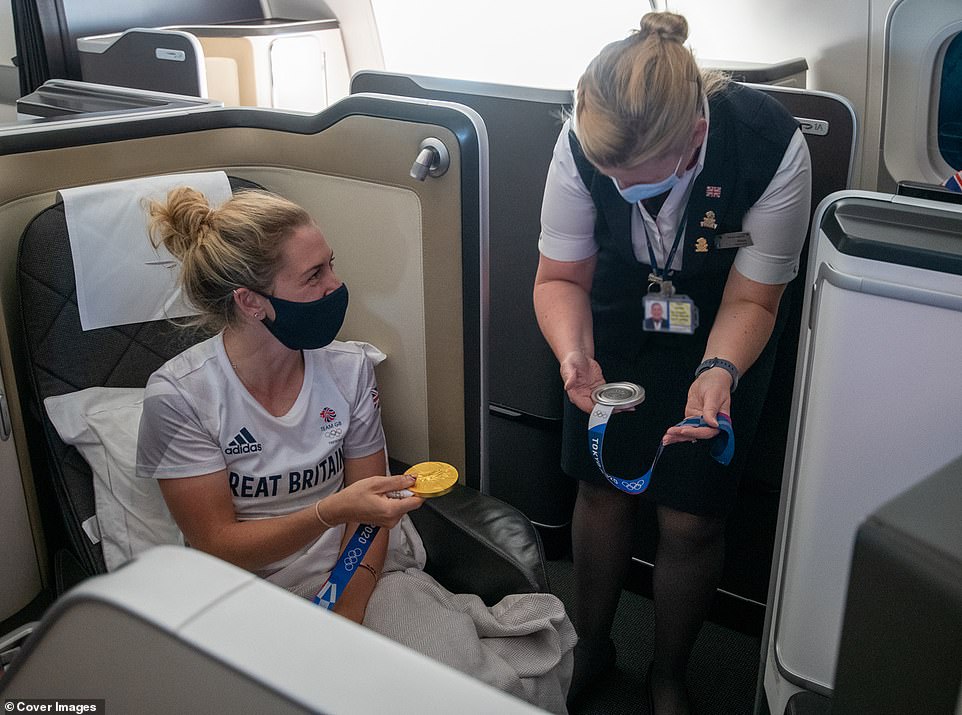 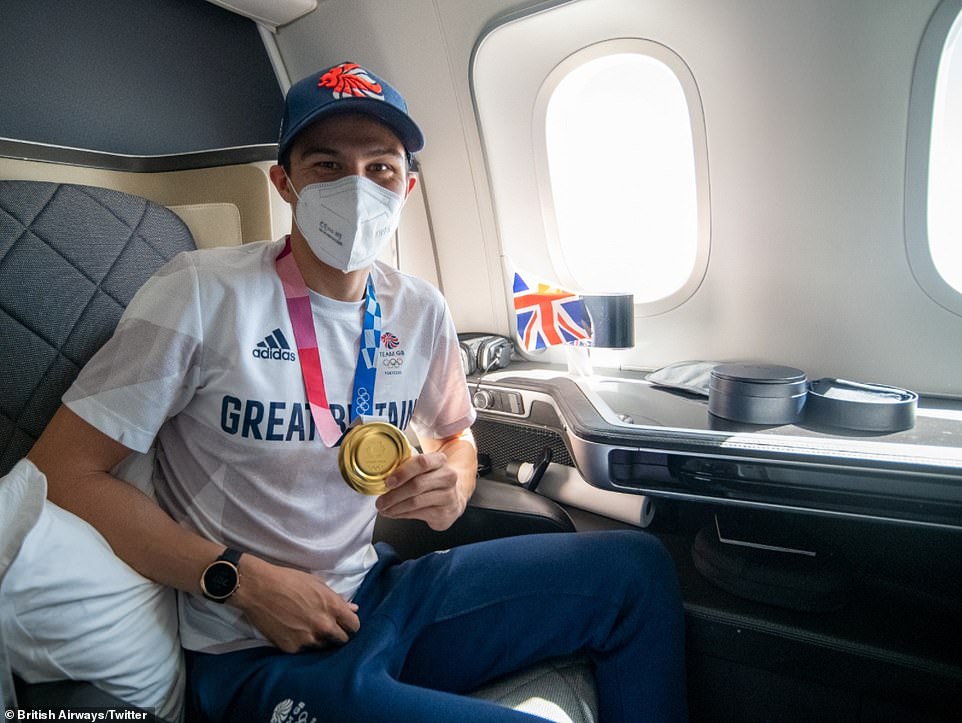 But those medal winners during the final few days of the Tokyo Games still enjoyed a terrific reception after the 12-hour flight home.

Diver Tom Daley, who won two medals at the Olympics, returned to the UK on Sunday night. The 27-year-old smiled and posed for pictures with well-wishers after stepping off his flight from Tokyo. 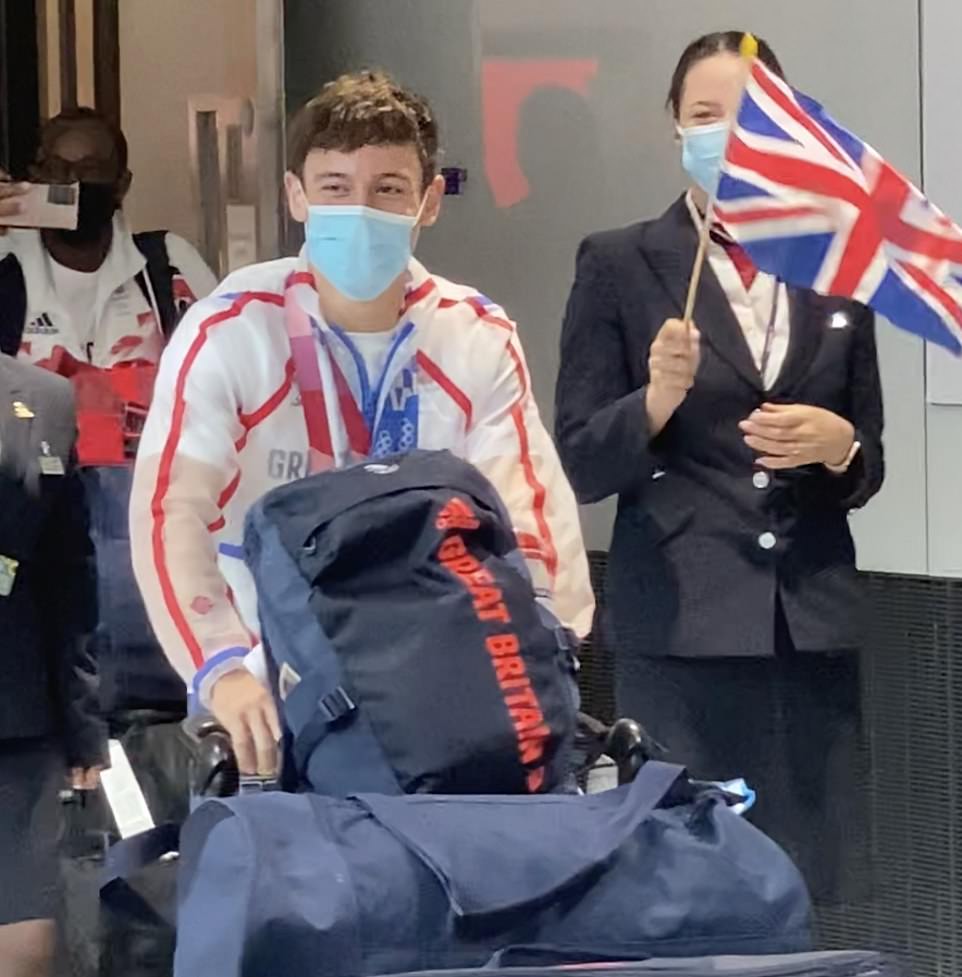 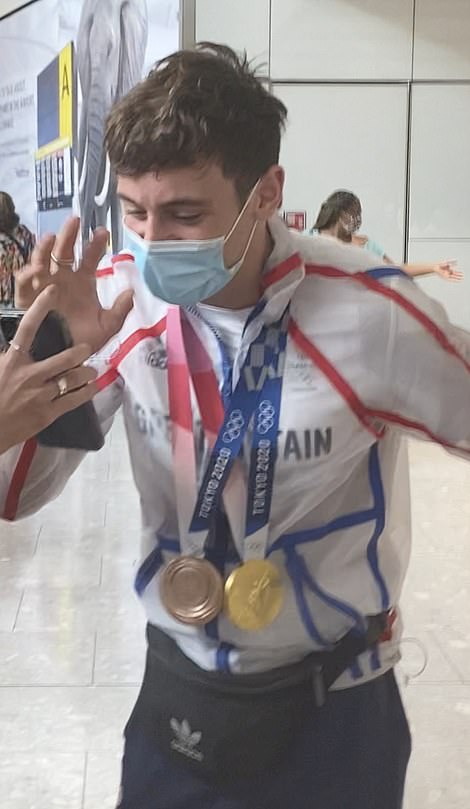 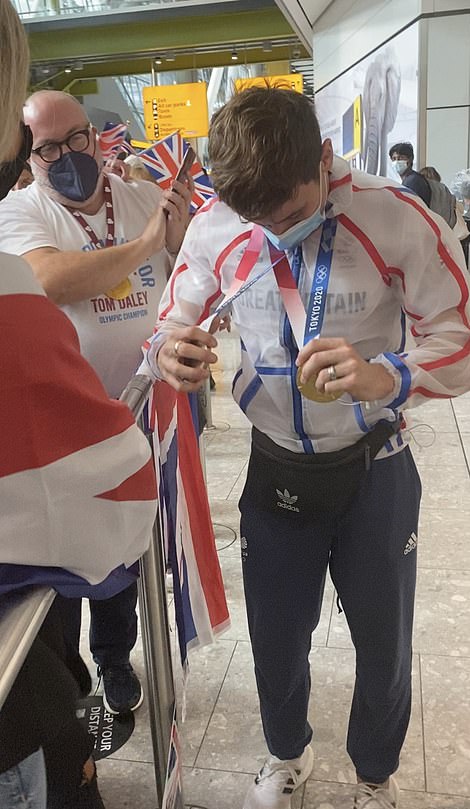 The British team equalled their medal haul from the London Olympics in 2012, winning 22 golds, 21 silvers and 22 bronzes to finish fourth in the medal table behind the United States, China and Japan.

It was their joint-second best return in any post-war Olympics Games with only the 67 won at the 2016 Rio edition surpassing it.

However, there was more diverse success for Team GB with medals won in 25 different sports compared to 19 in Rio, with 15 athletes winning more than one.

As has become familiar, cycling was our most successful sport in Tokyo with 12 medals won when successes in BMX and mountain biking are included.

TEAM GB STARS TO BE HONOURED AT BBC HOMECOMING CONCERT

Team GB athletes will have a chance to celebrate their Tokyo 2020 glory in a homecoming concert broadcast on BBC One on Sunday night.

BBC Radio 1 duo Greg James and Clara Amfo will host the event at Wembley Arena, which will be played out in front of an audience of 8,000 people. Key workers have been gifted tickets as a result of their efforts during the Covid-19 pandemic.

Artists lined up to perform in the show included Rag ‘n’ Bone Man, Bastille, Anne-Marie, Yungblud, Nile Rodgers and Griff, among others.

There will also be footage from the Games, including some of Team GB’s very best moments from Tokyo, as well as exclusive interviews with some of the athletes. 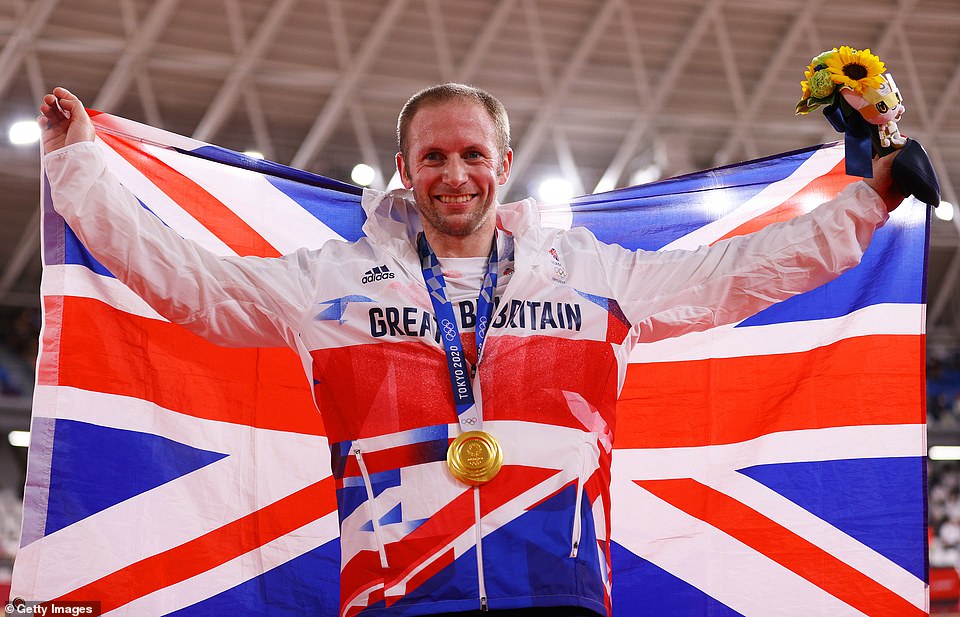 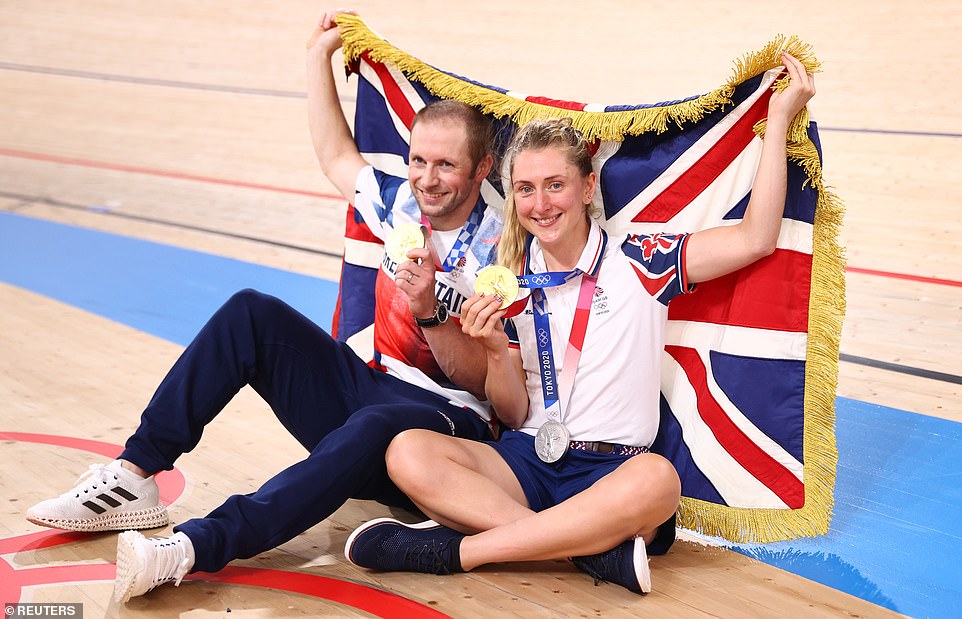 Jason and wife Laura Kenny, who won the madison with Katie Archibald as well as silver in the team pursuit, pose with their medals on the final day of the Olympic Games

There was a glorious conclusion for Britain in the velodrome, with Jason Kenny, the country’s most decorated Olympian, winning the seventh Olympic gold of his illustrious career and his ninth medal overall by dominating the final of the men’s keirin on Sunday. Kenny had earlier taken silver in the team sprint.

His wife Laura Kenny became the most successful female cyclist in Olympic history by winning gold alongside Katie Archibald in the women’s madison having earlier taken silver in the team pursuit. Kenny now has six Olympic medals across three Games, including five golds.

Britain won 11 medals in the Tokyo Aquatics Centre with Adam Peaty winning the 100 metre breaststroke before being part of the quartet that took gold in the 4x100m mixed medley relay.

The Olympics finished with a flourish for Team GB, with boxer Lauren Price winning boxing gold in one of the last finals to be held on Sunday.

Britain’s chef de mission Mark England hailed the team’s achievement as the greatest in their Olympic history, saying: ‘Following Beijing we had no idea that British athletes would deliver 65 medals in London.

‘We knew we were in great shape for Rio but it had never been done before, matching and then surpassing London’s number of medals.

‘I just think that finishing this Games with two gold medals, and for this team to deliver 65 medals, is absolutely extraordinary.

‘Not only has the team made history but it has probably made history on the back of the most complex and most challenging and difficult environment that we will face certainly in my lifetime.

‘It has been against all the odds and I think it is the greatest achievement in British Olympic history. It has been the miracle of Tokyo and it has been wonderful to be here.’

He said: ‘At Rio 2016, Great Britain became the first country to improve on its medal tally in the Olympics after being the host – and Team GB have now become the first to equal or win more medals at each of the next two Games.’

He said: ‘Expectations were mixed going into it. Certain sports didn’t perform as expected, others overachieved.

‘You get payment in kind for a gold. We have a limited pot of money and you have to use that as best you can. It’s about intelligent use of money, thinking outside the box and being inventive.

‘They have done us all proud – a great performance.’

Duncan Scott was also among several British athletes that made history at the Games – winning a record number of medals for a Briton at a single Olympics, a gold and three silver.

However, it was the United States who led the medal table with 39 gold medals – one more than second-placed China. The USA also finished with the highest medal total (113).

Sprinter Allyson Felix also created history, becoming the most decorated woman and American in track and field with her 10th and 11th Olympic medals, bronze in the 400m and gold – her seventh – in the 4x400m relay.

While the host nation, Japan, secured 58 medals and finished third in the ranking for gold medals – claiming a total of 27.