As NFL teams returned to practice Wednesday, some conversations turned to football. Not all.

The operative topic remained the demonstrations of unity each team showed last weekend in response to remarks by President Donald Trump, and what might be ahead.

Here’s a sampling of what those clubs are saying and planning:

FILE – In this Monday, Sept. 25, 2017, file photo, the Dallas Cowboys, led by owner Jerry Jones, center, take a knee prior to the national anthem before an NFL football game against the Arizona Cardinals in Glendale, Ariz. What began more than a year ago with a lone NFL quarterback protesting police brutality against minorities by kneeling silently during the national anthem before games has grown into a roar with hundreds of players sitting, kneeling, locking arms or remaining in locker rooms, their reasons for demonstrating as varied as their methods. (AP Photo/Matt York, File)

Jay Ajayi joined other NFL players in their national anthem protest even though his nationality is British.

Ajayi, born in London, was among at least five Miami Dolphins to kneel during the anthem before last week’s game at the New York Jets.

“I’m not into the whole, ‘You’re not American but you’re kneeling for the flag’ thing,” Ajayi said Wednesday. “Even though you have people portraying hatred and division, I wanted to be an example for my family and a symbol that we’re unified.”

Ajayi said his three siblings, all younger, are U.S. citizens. He was inspired to join the anthem protest by President Trump’s criticism of players who do so.

Coincidentally, Ajayi will play in his hometown Sunday when the Dolphins take on the Saints in London. Will he again take a knee during the anthem?

Coach Mike McCarthy said he is proud of the way his players have handled the decision to lock arms during the national anthem and ask fans in the stands and at home to join them. Packers players said the team would again stand and intertwine arms on the sideline during the anthem before the game Thursday night against the Chicago Bears.

Packers coaches and staff plan to join the players.

“The process that they’ve gone through, I’m proud of them,” McCarthy said Wednesday. “The approach is one of a positive nature, and that’s definitely the preference. Locking arms and honoring the flag, I think it’s a very good thing.”

Wide receiver Eric Decker responded to a TMZ report of his wife posted on Instagram that the Titans’ decision to stay in the locker room was made without his knowledge. Decker says the decision was made from the franchise’s leadership what to do as a team and he respects the leadership.

Rishard Matthews didn’t back off his comments Tuesday that he will kneel until President Trump apologizes, saying he said everything he needed. But the wide receiver says critics of NFL players protesting are using the military as a distraction, which he called unfortunate. He has heard from a lot of military people he knows supporting him for standing up for his rights and those with no voice.

“It’s not about the military,” Matthews said. “It’s about social injustice, and people need to be talking about that more than the military. I think they’re just using the military as an excuse.”

The Kansas City Fraternal Order of Police Lodge No. 99 has sent a letter inviting Chiefs cornerback Marcus Peters to join officers in a community-based program at Wendall Phillips Elementary School in Kansas City. The union recently was awarded a $145,000 grant to implement the program, designed to improve the relationship between police and the community.

The police union’s president, Brad Lemon, said Peters has not responded to the letter from earlier this month, though Chiefs executives said they have pledged to get involved.

Peters began protesting during the anthem last season, when he raised his right fist during its playing in a gesture reminiscent of the “Black Power” gesture of John Carlos and Tommie Smith during the 1968 Mexico City Olympics. Peters has spent this season sitting on the bench during the anthem.

“We ended the conversation with the intention of meeting soon and putting our efforts together,” Lemon said.

Cornerback Richard Sherman was unsure how the Seahawks would move forward with any protests following last week’s decision to stay in the locker room during the national anthem.

But Sherman said the show of unity throughout the league was an important moment.

“Last week was a pivotal moment for the league in general to stand and show continuity, to show togetherness, to show that we will not be bullied in a sense by the President of the United States and his words, and we will not be divided by those words,” Sherman said. “I think that was awesome. Each week will be different. I’m sure guys will do different things. But I think the message came across and I think guys are going to look for other ways to get involved and make a difference in other ways.”

Seattle is among the most outspoken teams in the league, with the likes of Sherman, Michael Bennett and Doug Baldwin, who all have spoken out about social issues for the last two years. Seattle coach Pete Carroll praised his team’s ability to be active and how they are encouraged to participate in social causes while also still playing at a high level.

“Honestly, that’s not the most relevant thing, what I think we should do on Sunday. What I would like to see is that the inequality and divisiveness stop. I would like racism and bigotry to stop. IF that stopped, the demonstrations would stop,” Sherman said. “My message to everyone out there is, hey, let’s stop the racism, bigotry and inequality, and there is nothing for these players to protest.”

Coach Dan Quinn expects players to lock arms, but not kneel, during the national anthem before Sunday’s game against Buffalo. Quinn also encouraged fans to also lock arms during the anthem.

Quinn said he thinks Jarrett and Poe taking a knee was a “one-off for us” and the best way “to show how solid we are” is to have the team act in unison.

“And obviously it’s a very difficult time in our country. There’s division. But I think that I can only speak to what I’ve personally seen in the last month and that’s people of all races, of all ethnicities, of all backgrounds, of all financial situations coming together to help each other out. And I think that has been such an incredible thing for me to witness, and it also gives a great amount of hope in my eyes.

Coach Dirk Koetter was asked about the challenges of coaching football this week.

“So you can’t just stick your head in the sand and act like it’s not there. It is and it’s uncharted territory with no easy answers in sight right now.”

Linebacker Brandon Marshall is among the players who believe Colin Kaepernick is being blackballed by NFL teams over the movement he started last year when he declined to stand for the “Star-Spangled Banner” during the 2016 preseason to bring attention to racial inequality in America. Kaepernick remains unsigned six months after opting out of his contract with the San Francisco 49ers and becoming a free agent.

“The dude, he’s in shape, he’s yoked, actually,” said Marshall, who saw his ex-college teammate on a TMZ video recently. “He’s so strong. He’s ready to go. He told me he’s been working out when I last talked to him. He said he’s just waiting for a call. That’s the next step.”

Saints quarterback Drew Brees reacted from across the pond in London when his team was getting ready to face Miami on Sunday at Wembley Stadium.

“I still feel like if you are an American you should stand and show respect to the flag and what it symbolizes,” he said.

“Certainly I respect the cause (of the players who did not stand). I think what you saw last weekend especially was a direct result of the comments that President Trump made.

“Unfortunately I think he put all athletes, all black athletes, minority athletes, he put them in a corner and forced them to take action. So that was unfortunate that he made the comments that he made.

“And I don’t blame the guys for feeling like they needed to do something as a reaction to that.” 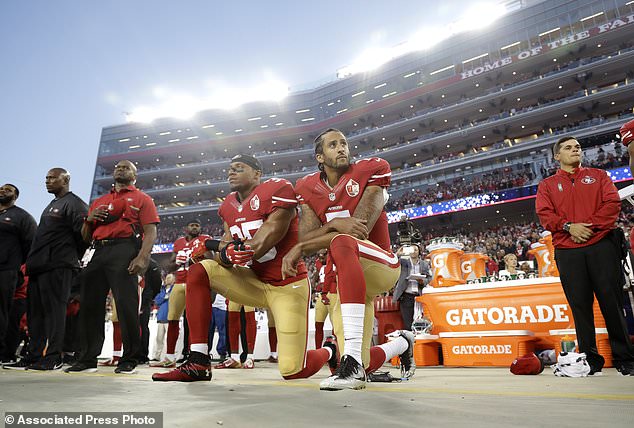 FILE – In this Sept. 12, 2016, file photo, San Francisco 49ers safety Eric Reid (35) and quarterback Colin Kaepernick (7) kneel during the national anthem before an NFL football game against the Los Angeles Rams in Santa Clara, Calif. What began more than a year ago with a lone NFL quarterback protesting police brutality against minorities by kneeling silently during the national anthem before games has grown into a roar with hundreds of players sitting, kneeling, locking arms or remaining in locker rooms, their reasons for demonstrating as varied as their methods. (AP Photo/Marcio Jose Sanchez, File) 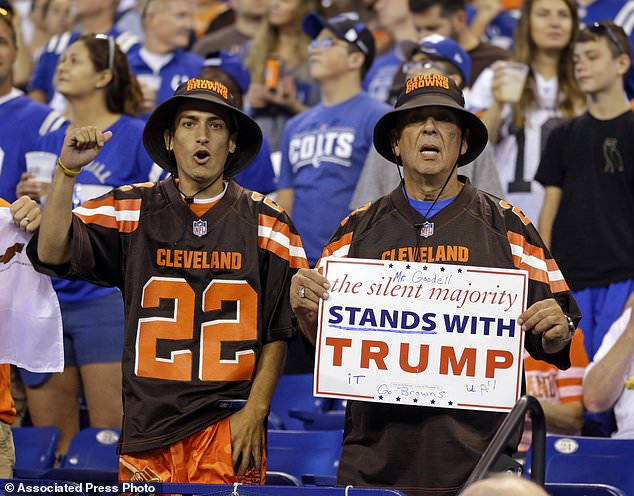 FILE – In this Sunday, Sept. 24, 2017, file photo, Cleveland Browns fans hold a sign following the national anthem before an NFL football game between the Indianapolis Colts and the Cleveland Browns in Indianapolis. Russian internet trolls are exploiting the controversy over NFL players kneeling during the national anthem to stir up divisions in the United States, according to Sen. James Lankford, R-Oka., a member of the Senate intelligence committee said Sept. 27. (AP Photo/Michael Conroy, File)