Tears from the Queen that show she did care about Diana

For the past four weeks, the Daily Mail’s Weekend magazine has published an unmissable series marking the 20th anniversary of Princess Diana’s death – from her love-starved childhood and whirlwind courtship with Prince Charles to her bitter rivalry with Camilla and the agonising breakdown of her marriage, we’ve brought you the untold story of her tragically short life.

In this, the final instalment, Richard Kay and Geoffrey Levy, who have spent months talking to her closest friends, her family and those she confided in, many of whom only now feel able to speak freely for the first time, examine in detail the events of those final fateful hours that propelled her towards that tunnel in Paris and her untimely death.

Eight days after Diana’s death, Father Yves-Marie Clochard-Bossuet learned that her mother Frances Shand Kydd was a Catholic (she had converted some years earlier) and felt compelled to write to her describing what had happened in the hospital. ‘I gave her all the details I could remember,’ he tells us.

‘Two days later I had a reply that was three pages long. It was extremely warm and kind. I think for someone who was a Catholic she took it as a sign of fate that the priest who was with her daughter was Catholic too.’

That exchange turned into a friendship that continued until Mrs Shand Kydd’s death in 2004. She invited the priest to her home in Scotland and after that, ‘whenever she came to Paris she took me to all the best restaurants’.

Katie Jones, 11, and her grandmother offer the Queen a bunch of roses – and their sympathy – outside Buckingham Palace on the eve of Princess Diana’s funeral

He organised a private Mass for Diana at the hospital, inviting ten of his own friends, all of whom he chose because they had suffered personal tragedy including the loss of a child.

When he collected Frances from the airport, he recalls, ‘I recognised her straight away. She was very tall, she must have been beautiful when she was younger.’ On subsequent occasions when he offered to collect her in his car on their way out to dinner, he remembers she would say, ‘No, no, no, we’re going to drink!’

He was also invited to spend an afternoon at Althorp, where Diana’s brother Charles showed him the museum established in his sister’s name. ‘You are the only person who has told me anything about my daughter’s death,’ Father Yves-Marie recalls Frances telling him. He says, ‘The officials didn’t say anything to her. No one took care of her in the days after the accident. She was marginalised.’

As for Henri Paul, he is remembered by his parents not as the driver held responsible for killing Diana but as a gentle, devoted son and a talented pianist. He was even teaching the children of the Ritz president Franz Klein to play.

A qualified pilot, only three days before the crash he’d passed his flier’s annual medical. ‘All I can say is, we had family parties and enjoyed ourselves as people do, but I never once saw my son drunk,’ says his father. ‘The Ritz would not allow an alcoholic to work there. But it’s hardly worth trying to defend his name any more.’

Klein gave the grieving parents dinner at the hotel and, says M. Paul, ‘he told us he had never worked alongside such a good colleague’. Diana’s mother Frances also met them, at one of the court hearings at the Palais de Justice. The Pauls have never forgotten what she said. ‘She told us, “Your son is not to blame”,’ says M. Paul.

‘She did not speak much French, but enough.’ Blame, it must be said, flew in all directions as Princess Diana’s body was flown back to RAF Northolt on Sunday 31 August. Until the funeral six days later she lay in the Chapel Royal at St James’s Palace, but few would say she lay in peace.

That Sunday morning, when the Queen led the family, including William, 15, and Harry, 12, to a service in Crathie Kirk near Balmoral, there was no mention of Diana. The visiting preacher, the Rev Dr Adrian Varwell, altered not a word of his sermon, which included Billy Connolly jokes. By the time he’d finished, the congregation was in a state of high discomfort. 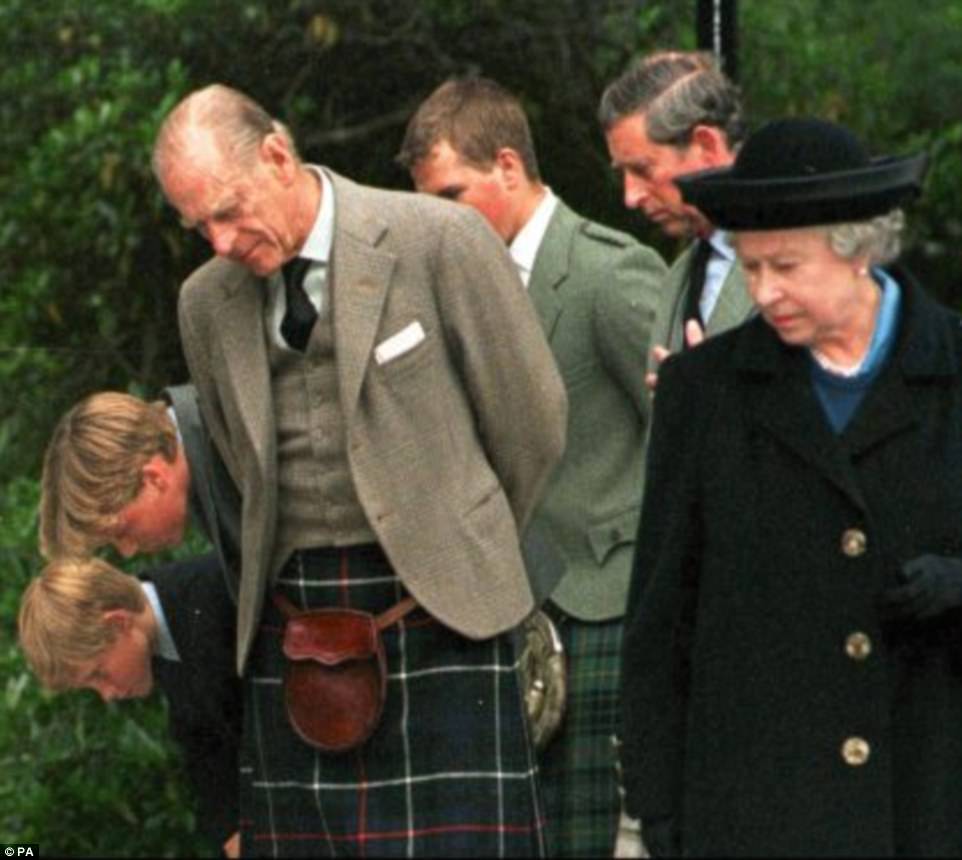 The family emerges from Balmoral Castle to look at the tributes. In the aftermath of the crash 350,000 letters of condolence, flooded in to Kensington Palace

So why did the Rev Varwell, now 70, not change the sermon? The minister of Crathie, the Rev Robert Sloan, explained later that the princess’s death wasn’t mentioned ‘to protect the boys’. Dr Varwell now says, ‘I think the poor woman should be left to rest in peace.’

This was the start of an extraordinary week in which the people found their faith in the monarchy shaken as the Queen and other close family members remained cloistered in Balmoral while a swell of mourning built up in London.

It focused on Kensington Palace, where a lake of flowers was growing, and also on Buckingham Palace, where – even though constitutionally correct – there was mounting anger at the refusal to fly a flag at half-mast. You could also sense the exasperation at St James’s Palace, where the queue to sign books of condolence was eight hours long.

The Union Flag was finally flown at half-mast over Buckingham Palace on the day of the funeral, and the Queen’s former private secretary Sir William Heseltine offers an intriguing footnote. ‘I have talked with the Queen about the flag decision without asking her if it was a mistake,’ he says. ‘But I think she would admit today that it was a mistake – I’m sure she would.’ 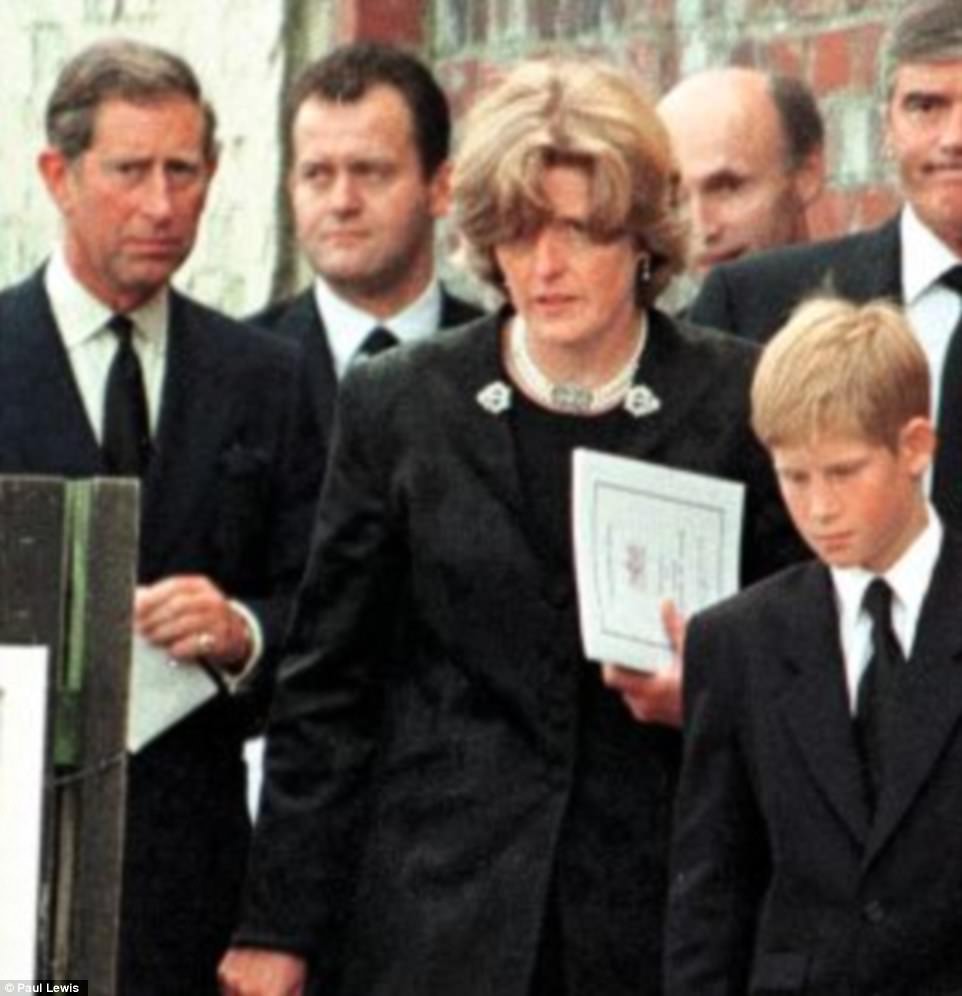 Charles, Harry, Lady Jane Fellowes and Paul Burrell (at rear) alight from the Royal Train near Althorp, where Diana was buried

Meanwhile, the Queen and Prince Philip finally returned to London on the Friday, the day before Diana’s funeral at Westminster Abbey. They’d stayed in Scotland, it was explained, to shield William and Harry from the impact of the nation’s grief. The boys returned to London with their father the same day. Pointedly, Charles took William and Harry home to Kensington Palace to look at the flowers.

If there was one moment that wiped away public anger at the royals’ absence from the capital, it was outside Buckingham Palace, where flowers were piled waist-high. A girl leaned out with her grandmother to offer the Queen a bunch of red roses.

‘Do you want me to place them for you?’ the Queen asked 11-year-old Katie Jones, from Brighton. ‘No, Your Majesty, they’re for you,’ the girl replied. Katie, now 31, and a recruitment consultant, says, ‘She asked me twice if I was sure. I said they were definitely for her and saw her eyes welling up.’ The Queen was holding them tight as she was driven back into the palace. 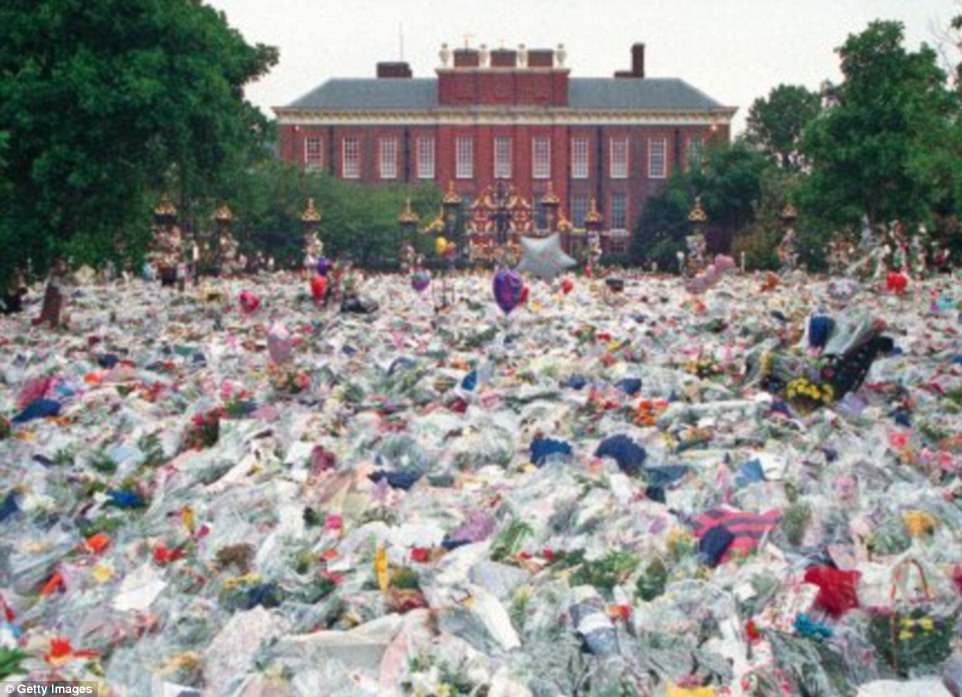 The ocean of flowers that grew outside Kensington Palace in the days following Diana’s death, stretching as far as the eye could see

A LETTER FROM BEYOND THE GRAVE

In the aftermath of the crash 350,000 letters of condolence, principally to William and Harry, flooded in to Kensington Palace as well as St James’s Palace, where the young princes went to live with their father. It took a team of up to 60 volunteers more than four months to sort them and to send more than 90,000 replies.

Three months later a letter from Kensington Palace arrived at the home of diplomat David Slinn, who had been in charge of arrangements when Diana had made her last official overseas visit, to Bosnia as part of her landmines campaign, three weeks before her death.

It was from the princess, a typically warm thank you letter, delayed because of the chaos of the Yugoslav civil war. ‘It was chilling to open it and read her words,’ he says. ‘She thanked me for taking care of the media which, she said, “I know from my own experience is not always easy”. It’s framed on the wall in my study, her legacy as far as I’m concerned.’

Courtiers believe the criticism was unfair. One senior figure says, ‘In any family when you have a sudden death there is a tendency to circle the wagons and seek comfort from each other.’

But was the rift between Diana and the royals – largely generated by her Panorama interview two years before – healed in her death? One is entitled to wonder. For some found the Queen’s poignant address to the nation ‘as a grandmother’ lacking one element: Diana, said the Queen, was admired, respected and cherished. But what about ‘loved’? And we understand that a suggestion emanating from Whitehall for a ‘Princess Diana Day’ was vetoed by the Queen’s advisors.

It was certainly love that spilled out as the princess was borne away to be laid at Althorp, 76 miles away, as people tossed flowers onto the hearse along the route. For many, though, the overpowering memory of that day was the searing address by Diana’s brother Charles Spencer from the pulpit of the Abbey in which his use of the phrase ‘blood family’ was seen as a criticism of the way the Royal Family had treated his sister.

That and the creaking of the pallbearer guardsmen’s leather boots in the silence of the Abbey as they carried in her coffin, followed by the astonishing sound of clapping reverberating beneath its ancient rafters. A cleric who was there recalls that the applause ‘cut through the royals like an icy wind’.