The Duke and Duchess of Sussex have enlisted a tech guru who once made cruel comments about the Prince and Princess of Wales’s appearance to speak in Harry & Meghan, a new trailer has revealed.

A one-minute long clip released by Netflix this afternoon features Christopher Bouzy, the founder of US tech company Bot Sentinel, who claimed: ‘It’s about hatred. It’s about race.’

Bouzy, who often comments about the rift between the Duke and Duchess and the Palace on Twitter, previously tweeted that he thought Kate and William, both 40, were ageing in ‘banana years’.

The second explosive trailer for the £88 million Netflix docuseries about the Duke and Duchess’s story after they stepped down as senior members of the Royal Family in 2020 reveals more bombshell claims from the couple, including Harry claiming there is a ‘hierarchy’ within the Royal Family.

After the release of the explosive trailer, Christopher tweeted: ‘I guess I can officially announce I am in the Harry and Meghan docuseries.

‘I want to thank everyone who has supported Bot Sentinel’s research and allowed us to expose the targeted hate campaign against Harry and Meghan.’

Last year, Christopher posted on Twitter about the Prince and Princess of Wales, making a ‘petty’ comment about how they were ageing.

He wrote: ‘Forgive me in advance for being petty. I just saw a recent photo of William and Kate, and those two are aging in Banana years.

‘I don’t understand why since they have a team of people who wait on them hand and foot 24/7.’

His crowdfunded company has previously looked into online trolling and harassment directed towards the Duchess of Sussex. 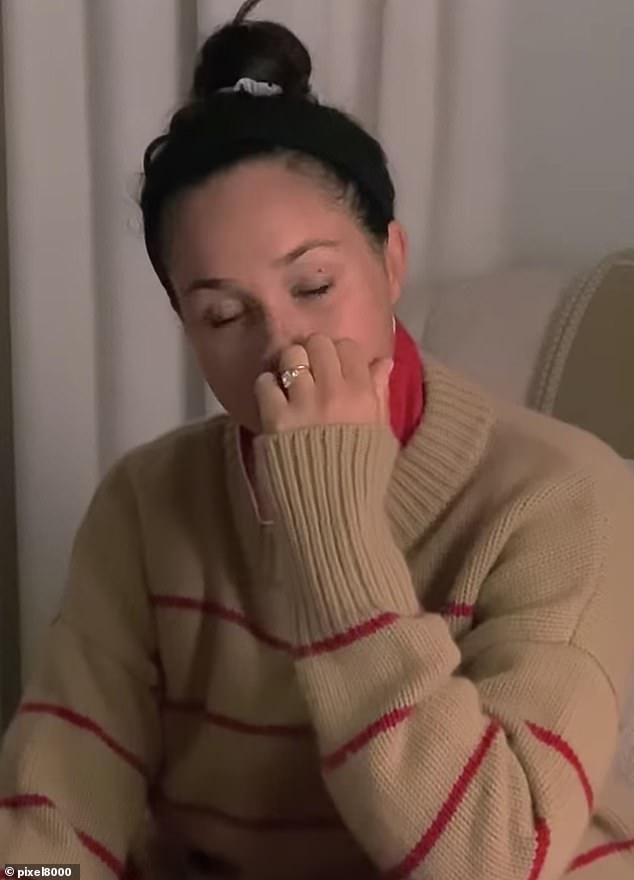 The latest trailer for Harry & Meghan, dropped by Netflix this afternoon, features the Duchess of Sussex looking strained and emotional

Last October, Bot Sentinel released a report which found that around 70% of the online harassment and abuse targeted at Meghan Markle came from just 83 Twitter accounts, Buzzfeed reported.

The second bombshell trailer from streaming service Netflix features more unseen photos of the Duke and Duchess of Sussex.

After a series of clips of photographers and newspapers being printed, Meghan says, ‘I realised, they’re never going to protect you’ before she is seen once again crying. Harry then adds, ‘I was terrified, I didn’t want history to repeat itself.’

The teaser opens with a scene of Harry and Meghan in a car, seemingly in America, as the duke says: ‘It’s really hard to look back on it now and go ”what on earth happened?”

It then paints a picture of the couple’s initial popularity, with a news presenter heard describing ‘the sounds of hearts breaking all around the world’ after they announced their engagement, and Piers Morgan says how Meghan was ‘becoming a royal rock star’.

Another scene plays of the Sussexes on a royal walkabout as a member of the public shouts ‘Meghan, we love you!’

At this point, a photo from their wedding appears, before Meghan says, ‘and then…’ and Harry adds, ‘everything changed’.

Today the streaming giant confirmed volume one will launch on December 8 – exactly three months after the death of Harry’s grandmother Queen Elizabeth II – while the second volume will be released on December 15 – clashing with the Princess of Wales’ carol service.