‘That night on Chappaquiddick Island ended in a horrible tragedy that haunts me every day of my life,’ Kennedy wrote in a memoir, True Compass. Kennedy is seen above on Capitol Hill in September 2007

Within a month of his death in August 2009, Senator Edward M. Kennedy said in a posthumously released memoir that he was not romantically involved with young Mary Jo Kopechne and that he never escaped the despair he felt after she died in the 1969 car crash that has been seared into the national consciousness as ‘Chappaquiddick.’

He acknowledged that he enjoyed women and drink – sometimes too much so – but said reports of wild Kennedy excesses were exaggerated.

Yet it was the specter of Chappaquiddick that Edward Kennedy, the youngest brother, never could shake.

‘That night on Chappaquiddick Island ended in a horrible tragedy that haunts me every day of my life,’ Kennedy wrote in a memoir, True Compass.

The Massachusetts senator died on August 25, 2009 at age 77 following a yearlong battle with brain cancer.

Kennedy said his Catholic faith helped sustain him as he wrestled with guilt over the events of July 18, 1969, when he drove a car off a bridge into a pond on the tiny island. 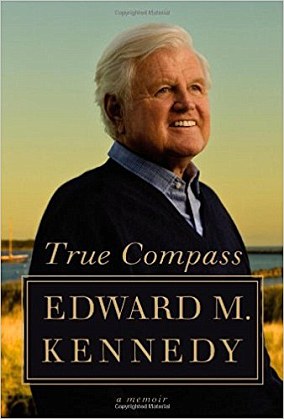 In Kennedy’s 2009 memoir, he addresses the Chappaquiddick incident

His own anguish, he said, paled in comparison with the suffering endured by Kopechne’s family.

‘Atonement is a process that never ends,’ he wrote.

In the book, Kennedy said his actions on Chappaquiddick on July 18, 1969, were ‘inexcusable.’

He said he was afraid and ‘made terrible decisions’ and had to live with the guilt for more than four decades.

Kennedy drove off a bridge into a pond. He swam to safety, leaving Kopechne in the car.

Kopechne, 28, a former worker with Robert Kennedy’s campaign, was found dead in the submerged car’s back seat 10 hours later.

Kennedy, then 37, pleaded guilty to leaving the scene of an accident and got a suspended sentence and probation.

He wrote that he had no romantic relationship with Kopechne, and he hardly knew her.

He said they were both getting emotional about his brother’s death and decided to leave the party that was hosted by Robert Kennedy’s former staffers.

He made similar statements in the days following the crash