President Donald Trump’s legal team wasn’t able to enlist Theodore Olson in its effort to counter the Mueller probe because the super-lawyer’s law firm already represented Karen McDougal, who claims she had a 10-month affair with Trump.

Trump’s legal team – which lost attorney John Dowd this week – reached out to Olson, 77, the former U.S. solicitor general, about joining the effort, according to numerous reports this week.

It would have made for the addition of additional intellectual fire power as Trump battles special counsel Robert Mueller’s sprawling Russia probe.

But the effort appears to have been doomed from the start owing to potential conflicts of interest that were only alluded to in reports on the ill-fated recruitment effort, DailyMail.com has learned.

NOT OF COUNSEL: Theodore Olson, right, is not joining President Trump’s legal team. He would have been barred from doing so because his firm represents Karen McDougal, who claims she had an affair with Trump, and Fusion GPS

In addition to having represented McDougal – who told her story of a 10-month affair with Trump where she says the real estate baron offered her money after sex –Olson’s firm also represents Fusion GPS, which procured the infamous ‘golden showers’ dossier of potentially damaging information on candidate Donald Trump.

Among other things, Trump longtime lawyer and fixer Michael Cohen is suing Fusion GPS over the dossier, which he claims includes false information about him.

Those issues would have been a problem ‘out at the starting gate,’ according a knowledgable source at the firm. 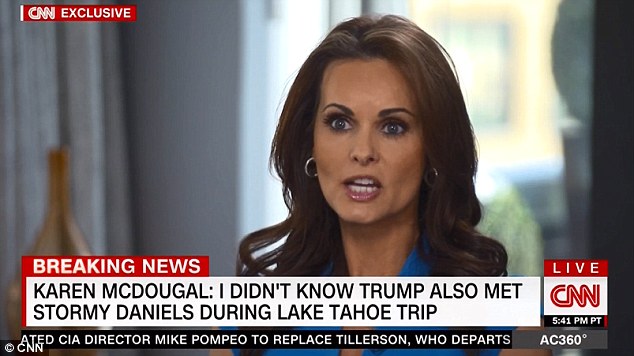 SUING: Former Playboy playmate of the year Karen McDougal is suing a media company over a non-disclosure agreement. She claims she had a 10-month affair with Donald Trump

The Washington Post reported that Olson had declined the offer, after Trump discussed the overture with aides on Monday. Other outlets cited undisclosed potential conflicts.

Gibson Dunn attorney Ted Boutrous represented McDougal in 2016 – although he was not part of the team of six lawyers who filed a complaint in Superior Court in Los Angeles on behalf of McDougal against American Media Inc.

McDougal is seeking relief from an agreement whereby she was paid $150,000 by the publisher of the National Enquirer in exchange for her story. The publication never ran it, and said it didn’t meet the bar for publication.

The lawsuit does, however, mention Boutrous – and even includes an image of a tweet he posted in October 2016, when a slew of women came forward to accuse Trump of impropriety, harassment, and assault. 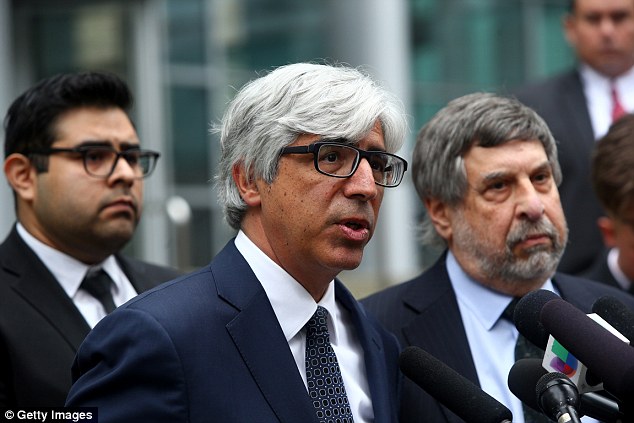 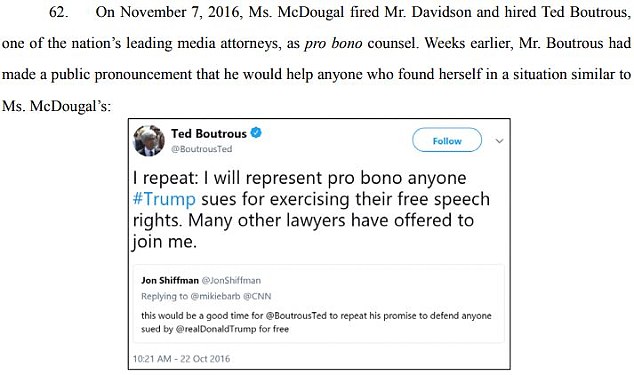 ‘I repeat: I will represent pro bono anyone #Trump sues for exercising their ree speech rights. Many other lawyers have offered to join me,’ he wrote.

Trump has denied all of the charges and threatened during the campaign to sue his accusers.

According to the suit, on November 7, 2016 McDougal fired the lawyer who helped negotiate her non-disclosure agreement and hired Boutrous, referred to in the suit as ‘one of the nation’s leading media attorneys.’ He has argued multiple appeals before the U.S. Supreme Court and is listed as the firm’s global co-chair of its litigation group.

Boutrous and his associates negotiated an amendment to the agreement allowing McDougal to respond to ‘legitimate press inquiries, although McDougal’s suit argues she was thwarted by the media company.

Although reports this week said Gibson, Dunn & Cruther was ‘weighing potential conflicts’ about the possible hire, although there have been no public indications Olson wanted the job.

Boutrous tweeted Monday following a Washington Post report: ‘I can confirm that [the firm] and Theodore B. Olson will not be representing Trump,’ he wrote.