World Health Organisation chief Tedros Adhanom Ghebreyesus has been re-elected to serve a second five-year term as director-general of the global health body.

He won a secret ballot at the 75th World Health Assembly in Geneva as the sole candidate in what was a foregone conclusion.

An overwhelming majority of the WHO’s 194 member states voted for Dr Tedros to continue in his role as the UN health agency’s director-general.

Dr Tedros shook hands with delegates from various countries and received a standing ovation from the assembly in Geneva.

‘This is overwhelming,’ he said in his acceptance speech to the delegates. ‘I’m really grateful and humbled for your confidence and trust.’

The role can only be reappointed once, and Dr Tedros begins his new mandate officially on August 16.

His trademark moustache became known in households globally as one of the leading protagonists dealing with the global Covid-19 pandemic that erupted at the start of 2020.

He was a little-known figure before his rise to prominence during the coronavirus pandemic, serving as the Ethiopia government’s first Health Minister and then Foreign Minister. 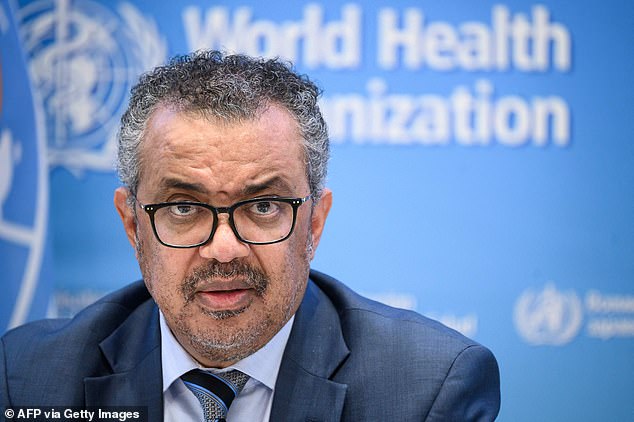 Dr Tedros became a household name during the Coronavirus pandemic, when he faced accusations of being too cosy with China 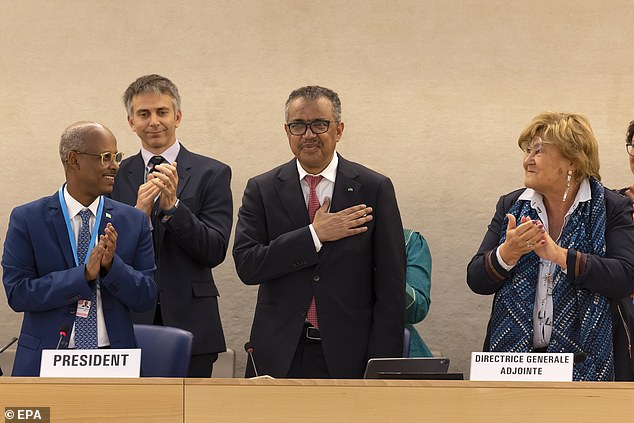 But he faced heavy criticism for his handling of the pandemic, which was deemed to be very ‘China-centric’, heaping praise on China’s communist party for its response to the Covid outbreak.

He hailed the regime’s ‘commitment to transparency’ and said the speed with which it detected the virus was ‘beyond words’.

Indeed, it is not the first time that Dr Tedros has been accused of cosying up to China. Shortly after his first election victory in 2017, it was alleged that Chinese diplomats had been heavily involved in lobbying for him.

UN records also show that Chinese contributions to both Ethiopia’s aid budget and the WHO have substantially increased during times when he was in top leadership positions.

However, he finally criticised China when he laid into its brutal Zero Covid strategy and urged it to change its policy, as millions in Shanghai struggle under a severe lockdown.

In a rare rebuke of the Communist party, which is one of the biggest financial contributors to the health agency, Dr Tedros said the strategy was unsustainable.

‘As we all know, the virus is evolving, changing its behaviours, becoming more transmissible,’ he said. ‘With that changing behaviour, changing your measures will be very important.

‘When we talk about the zero-Covid strategy, we don’t think it’s sustainable.’ He added: ‘Considering the behaviour of the virus I think a shift [in China’s strategy] will be very important.’

Dr Tedros – who has never practised as a medical doctor – is a career politician who was born in what is now Eritrea, began work under the Communist Derg junta, and came to study in the UK in 1991.

Shortly after his election to the WHO, a report in The Times said: ‘Chinese diplomats had campaigned hard for the Ethiopian, using Beijing’s financial clout and opaque aid budget to build support for him among developing countries.’ 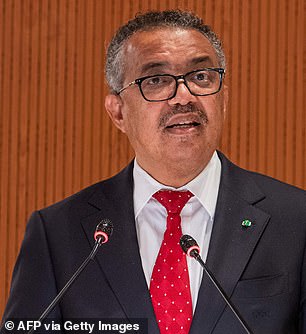 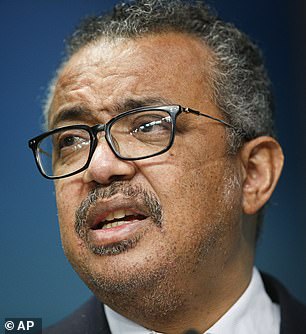 Dr Tedros faced heavy criticism for his handling of the pandemic, which was deemed to be very ‘China-centric’, heaping praise on China ‘s communist party for its response to the Covid outbreak

Dr Tedros – who is married and has five children – was born in 1965 in Asmara, which was part of Ethiopia at the time but is now in Eritrea.

As a child he saw his younger brother die to an infection, which he believes was measles, which he later said spurred his determination to work on health and health policy.

He graduated from university in Ethiopia in 1986 with a degree in biology and went to work as a health official in the regime of Marxist dictator Mengistu Haile Mariam, while the country was ruled by the Derg military junta.

According to the BBC, Dr Tedros then joined the hard-left TPLF – which started life as a Communist party and played a major role in overthrowing Mariam in 1991. It later became part of the EPRDF, a coalition of left-wing parties that ruled Ethiopia until last year.

Around the same time as Mariam’s ouster, Dr Tedros left Ethiopia and came to the UK where he studied at the London School of Hygiene & Tropical Medicine, graduating with Masters of Science in Immunology of Infectious Diseases in 1992.

He then went on to study at the University of Nottingham, where he received a PhD in community health in 2000.

After this, he returned to Ethiopia where he joined the health ministry and rose through the ranks from regional health minister all the way to national Minister for Heath – a position he took up in 2005. 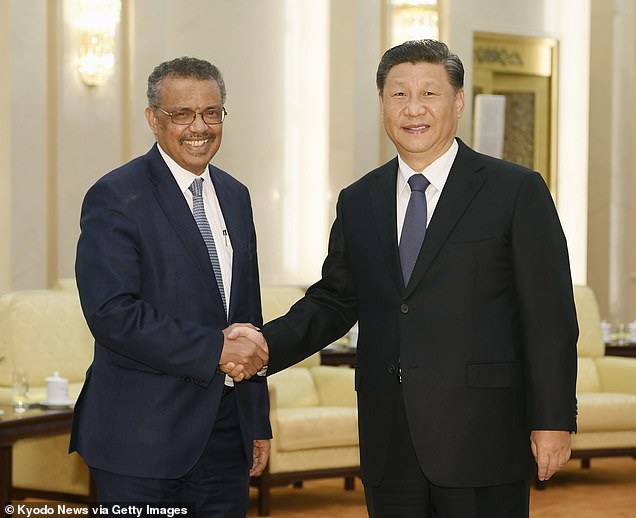 The WHO and its Director-General Tedros Ghebreyesus (left, pictured meeting with Xi Jinping in January) faced accusations in 2020 that the organisation was ‘China-centric’ and was too quick to praise the regime’s coronavirus response 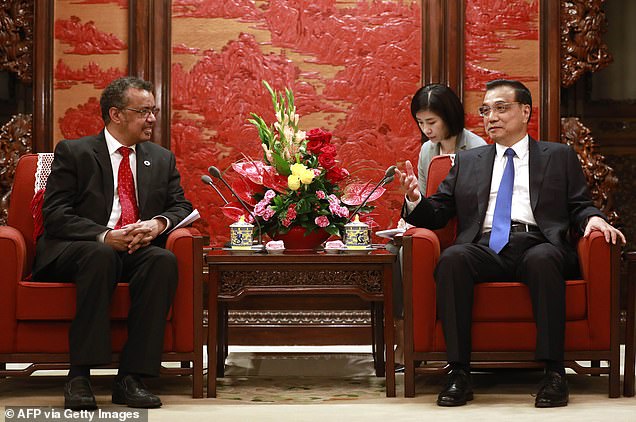 Dr Tedros (left) became the first African head of the WHO and the first non-medical doctor to hold the role when he was elected in 2017, amid allegations of heavy lobbying by China (pictured, Dr Tedros in Beijing shortly after his election)

During his tenure, which lasted until 2012, he was widely praised for opening thousands of health centres, employing tens of thousands of medics, bringing down rates of HIV/AIDS, measles and malaria, as well as bringing information technology and the internet into the heath system.

In November 2012 he was promoted to Foreign Minister, and was widely hailed for helping to negotiate a boost in UN funding for Ethiopia, including as part of the Addis Ababa Action Agenda.

Indeed, UN funding records show that around this time the country received millions in additional funding – including from China, which had previously given little or nothing to support the country.

In 2015 and 2016 China gave some $16million to Ethiopia in spending commitments and cash contributions, largely in support of food or refugee programmes.

In 2011, just before Dr Tedros took up the role, and in 2017, just after he left, China handed over another $44million in commitments and contributions.