About two years ago, Hector Hernandez realized he was gaining weight and his stomach was heavily protruding.

The 47-year-old believed it was due to middle age while his friends joked that it was the result of a beer belly, despite the fact that Hernandez doesn’t drink.

After trying diet and exercise, and seeing that his stomach was getting bigger while his arms were getting thinner, he decided to visit a doctor.

Tests showed that Hernandez, from Downey, California, had a 70-pound cancerous tumor – nearly the size of a watermelon – that had been growing in his abdomen. 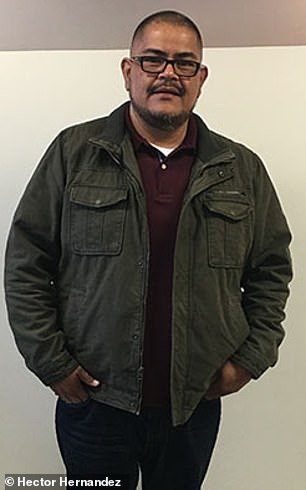 For two years, Hector Hernandez, 47, kept gaining weight and his stomach was protruding. He thought it was the result of middle age while his friends joked that he had a beer belly. Pictured: Hernandez before his surgery, left, and after his surgery, right 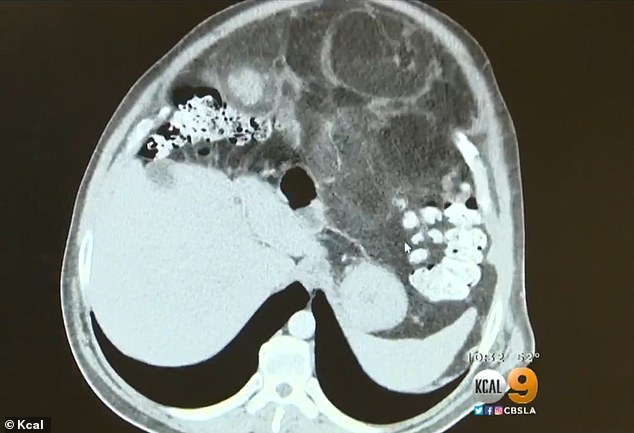 After realizing his stomach was getting bigger while his arms were getting thinner, Hernandez visited a doctor. CT scans showed he had a 70-pound tumor growing in the back of his abdomen. Pictured: CT scan showing tumor (upper gray half)

Hernandez says he’s always had problems maintaining a slim waistline but, when his abdomen began to grow, he would get unsolicited advice.

‘I would get from people: “You should stop drinking beer”,’ Hernandez, a billing administrator for an IT company in Los Angeles told WebMD.

He says he would laugh off the comments and tell people that he doesn’t drink beer.

When Hernandez’s weight crept to nearly 300 pounds, he began exercising.

Neither his weight nor his stomach were going down but his arms were getting thinner. Additionally, his stomach was hard to the touch.

At the insistence of his family, he made an appointment in June at Keck Hospital of University of Southern California.

After performing a CT scan, doctors told Hernandez, he had a massive growth of fat calls in his stomach known as retroperitoneal liposarcoma.

These tumors are a subtype of liposarcoma, which are malignant tumors of fatty tissue.

Retroperitoneal liposarcomas grow in the back of the abdomen, which is why they often go undetected.

The tumors start out small, but they can expand to the size of a watermelon, Dr William Tseng, an associate professor of clinical surgery at Keck School of Medicine of USC told WebMD.

According to the Journal of Gastrointestinal & Digestive System, these tumors are very rare and occur in about 2.5 per million people. 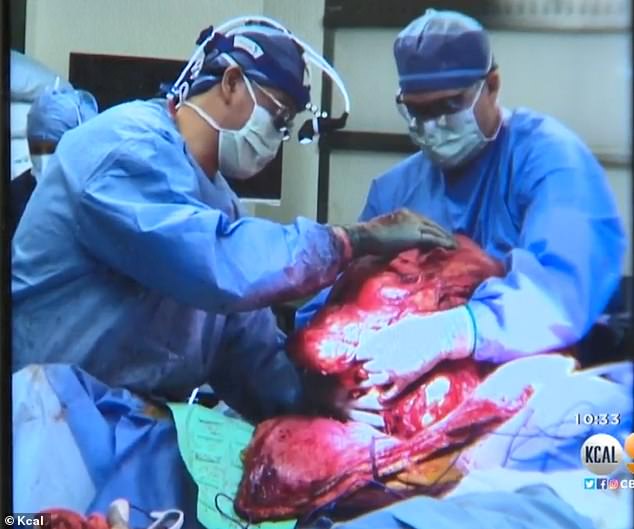 The tumors, known as retroperitoneal liposarcomas, are very rare and cancers of the fat cell. Because of where they grow, they often go undetected. Pictured: Surgeons remove Hernandez’s tumor 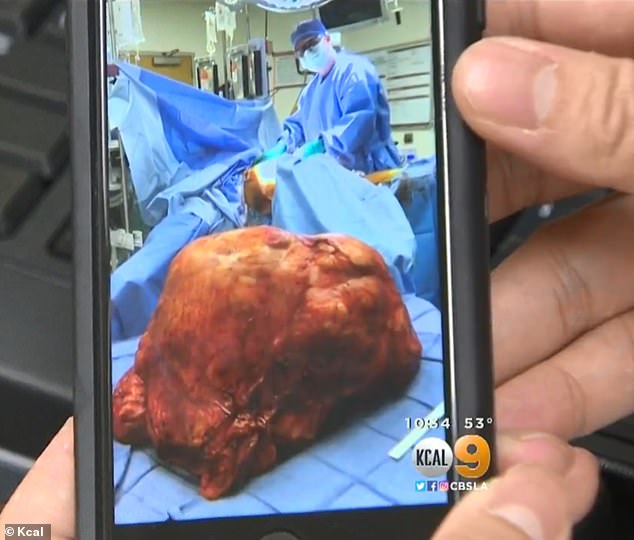 Hernandez was scheduled for surgery in July and, after a six-hour operation, the massive growth was removed. Pictured: Hernandez’s tumor after the surgery Hernandez entered the hospital weighing 300 pounds and, by the time he was discharged, he lost 100 pounds. Pictured: Hernandez with his doctor after his surgery

Despite the size of the tumors, they have a very low rate of spreading because they are attracted to fat cells. Therefore, doctors opt for surgical removal over chemotherapy and radiation.

The five-year survival rate for retroperitoneal sarcomas is between 40 to 60 percent, but local recurrence occurs in about two-thirds of patients.

‘These tumors are typically about maybe 20 to 30 pounds in size. His was 70 pounds,’ Dr Tseng told CBS Los Angeles.

Hernandez was scheduled for surgery in July and, after a six-hour operation, the massive growth was removed.

He entered the hospital weighing 300 pounds and, by the time he was discharged, he lost 100 pounds.

Dr Tseng says Hernandez will have to return every four months for routine CT scans to make sure the tumor doesn’t return.

Despite the need to keep a close watch, Hernandez told WebMD that a multitude of health problems disappeared following his surgery.

‘My energy level is through the roof,’ he said. ‘I don’t have diabetes anymore, and I don’t have high blood pressure.’