‘I’m 17 and going through menopause’: Teen reveals crippling impact of common disease that condemned her to years of bleeding, chronic pain and weeks off school

Most women dread ‘that time of the month’.

But just one week would be a welcome relief for 17-year-old Chelsea Timandi who has had her period for three years straight, the blood only stopping in the past month because she has been put on a tablet that triggers artificial menopause.

The schoolgirl from the Gold Coast in Queensland has known nothing but labour-like pain since she was nine years old – a side effect of the endometriosis she has since been diagnosed with.

‘When I was nine I would get extreme pelvic pain around my hips and thighs… it would go right down to my ankles sometimes,’ she told FEMAIL.

‘We thought it was growing pains and just used freezer bags of ice all over my body. I didn’t think anything of it.’

When she turned 12, Chelsea was on a family trip around Europe when her period lasted the entire four weeks they spent away. Her mother knew that wasn’t normal. 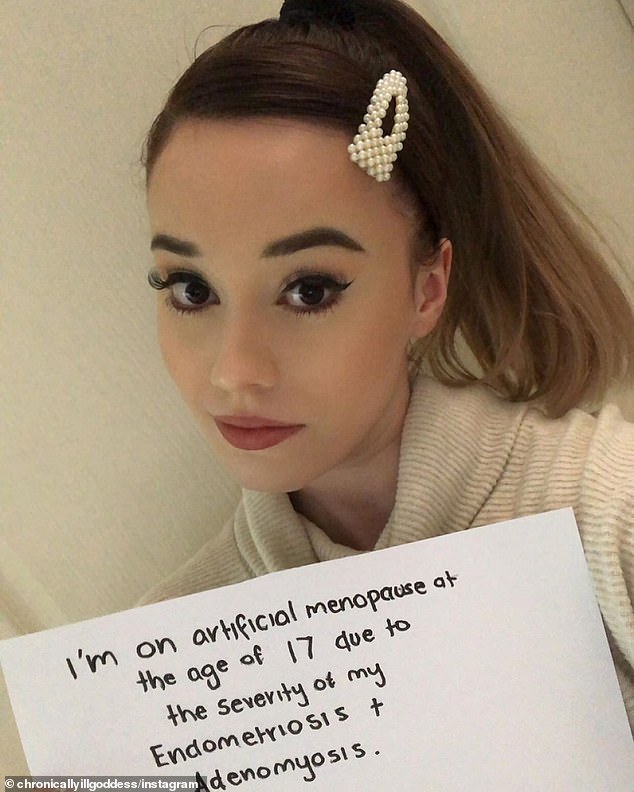 When she turned 12, Chelsea was on a family trip around Europe when her period lasted the entire four weeks they spent away. Her mother knew that wasn’t normal 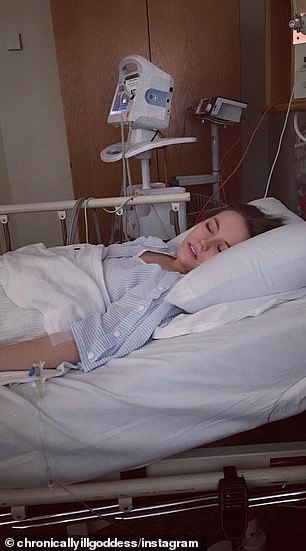 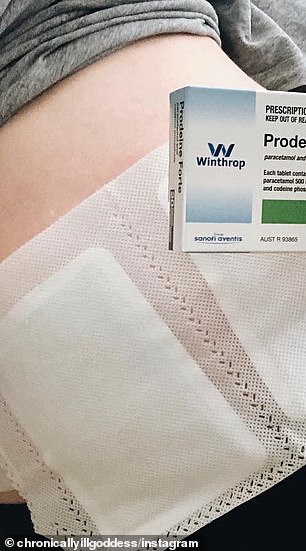 What is endometriosis and adenomyosis?

Endometriosis is a medical condition that occurs when the lining of the uterus, called the endometrium, grows in other places, such as the fallopian tubes, ovaries or along the pelvis.

When that lining breaks down, like the regular lining in the uterus that produces the menstruation, it has nowhere to go. This causes cysts, heavy periods, severe cramps and even infertility.

It can cause menstrual cramps, lower abdominal pressure, and bloating before menstrual periods and can result in heavy periods.

She couldn’t laugh or move and they thought it might be her appendix but after returning to Australia it was found to be something more chronic.

‘My GP was confused and kept asking if I’d had sex. I was 12 and didn’t even know what that was. I think she thought I had an STI,’ Chelsea said.

‘Another women’s health doctor thought I might have endometriosis but she didn’t suggest a laparoscopy [surgery that diagnoses the condition] and it would be another three years before I had it done.’

When she was finally delivered the heartbreaking confirmation at 15, alongside another discovery of adenomyosis, the true weight of what Chelsea would have to face set in.

‘I’m in hospital every other week. I always get random stomach issues and my whole body aches… sometimes it feels like someone is chopping my thighs off,’ she said. 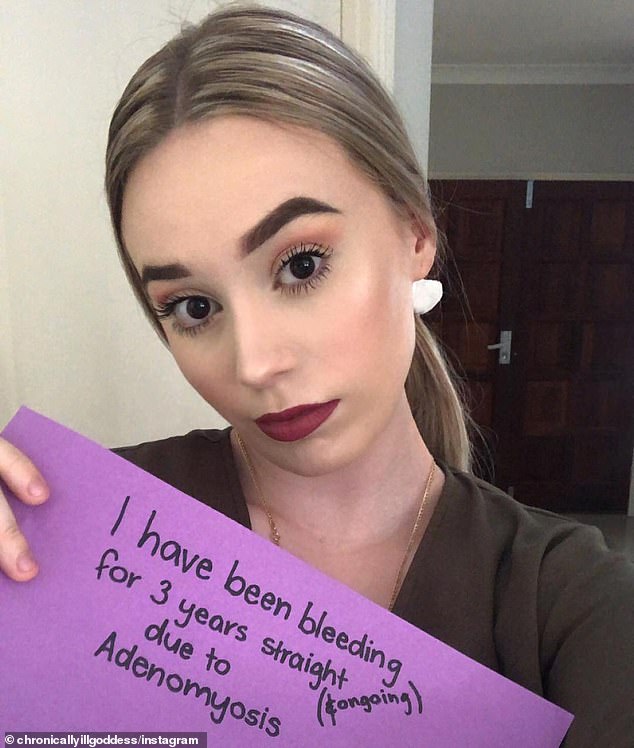 ‘I’m in hospital every other week. I always get random stomach issues and my whole body aches… sometimes it feels like someone is chopping my thighs off,’ she said

‘I suffer really bad fatigue. I can sleep for 12 hours a night and then still need a few extra hours in the middle of the day to get through.’

While the physical pain is excruciating the pressure it puts on her everyday life is more than most 17-year-old’s have to face.

‘I have taken weeks off school – sometimes six at a time – due to the pain,’ she said. 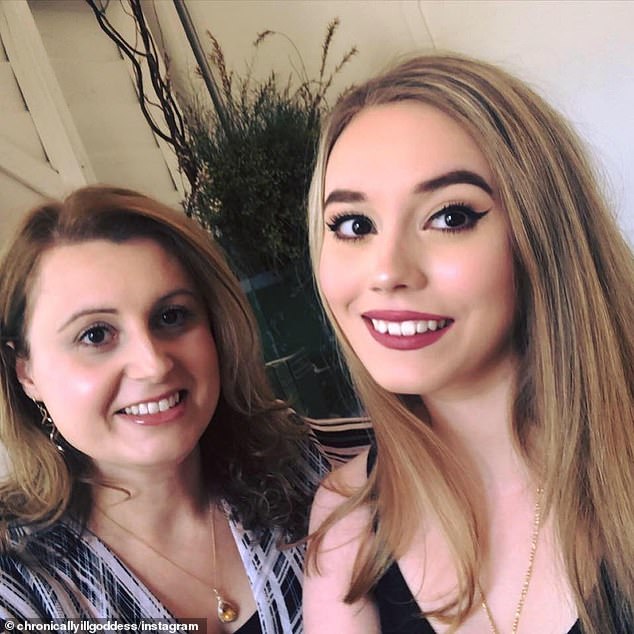 ‘Most of the time I can hide the pain with medication I keep on me but sometimes I have to call my mum to come and get me,’ she said (pictured with her mother)

What research is being done into the treatment of endometriosis?

Brisbane-based Professor Grant Montgomery and his team at The University of Queensland’s Institute for Molecular Bioscience are leading the charge in endometriosis research in Australia.

With endometriosis effecting 10 per cent of Australian women and costing the economy $7.4 billion a year in lost productivity according to a recent Ernst and Young study, finding a cure is key – not only for Grant’s team, but for roughly 700,000 Australian women.

Professor Montgomery’s research has now identified a number of genetic risk factors associated with endometriosis and is looking at the way previous genomic studies in cancer can be applied to endometriosis, to better understand the disease. 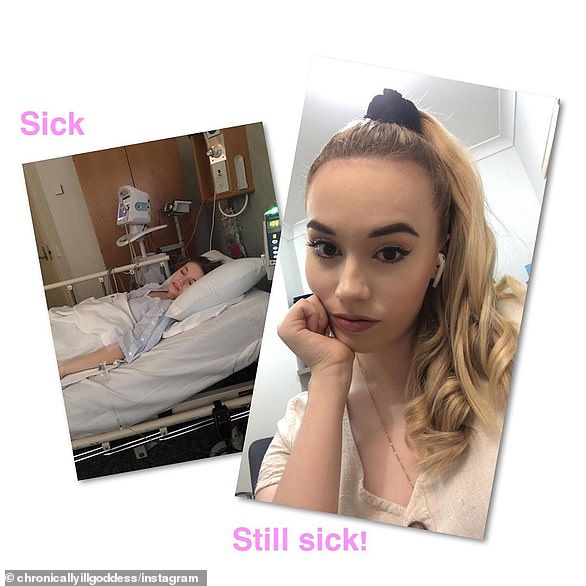 ‘We don’t know if there are sub-types of endometriosis, however we are currently working to understand this, as this could potentially mean endometriosis is treated differently based on the type, as is done with some tumours such as breast cancer,’ he said.

‘Because we don’t know the cause of endometriosis, current treatment is only treating symptoms but not the cause, which means treatment is not effective in all cases.

‘Over the next five years of our research program, we will be moving towards a translational focus to understand if there are sub-types of the disease and various treatments, as well as understanding some of the cell biology in the initiation of the disease – building on our previous genetic and genomic studies to hopefully find better treatments.’

‘Most of the time I can hide the pain with medication I keep on me but sometimes I have to call my mum to come and get me.’

She has had to quit two jobs – one at McDonald’s and the other at Typo – because of the uncontrollable pain she’ll experience during a three hour shift.

And yet there is no cure for her life-changing conditions. 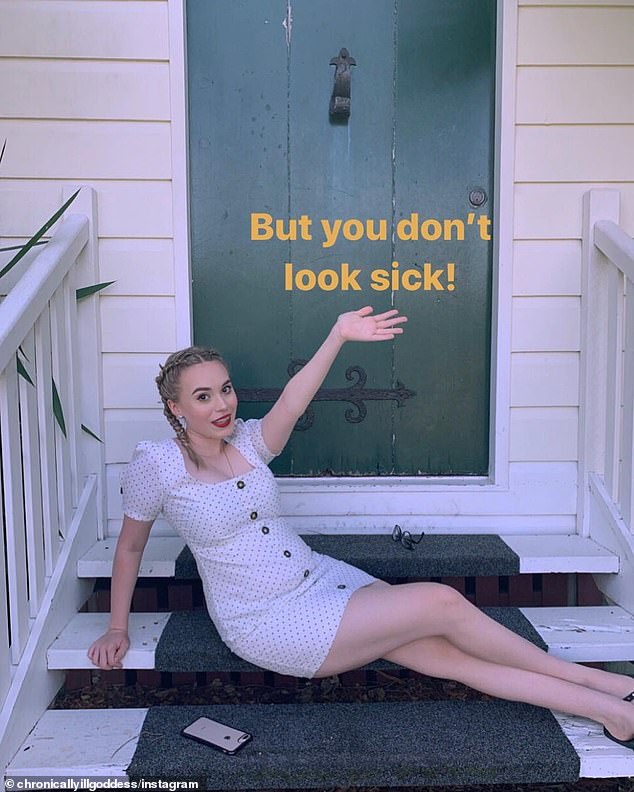 ‘The side effects are crazy when I’m older… I’m at risk of developing osteoporosis because my bones are thinning… but this will hopefully help me have kids.’

Loss of blood from three years of constant bleeding has led to Chelsea developing anaemia ‘lots of times’ and having to take iron and hormone tablets.

Because of her age a lot of people suspect that Chelsea isn’t really ‘sick’ and she’s too young to have endometriosis.

‘A lot of people don’t believe me, people who have no idea what I’ve been through,’ she said.

‘Just because you can’t see it doesn’t mean I’m not sick. I love makeup and love dressing up… you could never tell I’m cripplingly sick.’