A teen has accused an Alaskan Airlines flight attendant of ‘slut shaming’ her and ‘grabbing’ her arm while threatening to kick her off the plane over her outfit —  a zip-up hoodie over a crop top and shorts.

Sierra Steadman, a high school volleyball player from Washington, shared a heartbreaking TikTok of herself sobbing in her seat with mascara running down her face after the alleged altercation.

‘I’ve never felt more degraded, ashamed, embarrassed, angry or sad. F ALASKA AIRLINES!!!!!!!’ she captioned the video, which has been viewed eight million times since it was posted over the weekend.

Accusations: Sierra Steadman, a high schooler from Washington, alleged an Alaska Airlines flight attendant ‘slut shamed’ her and threatened to kick her off the plane over her outfit 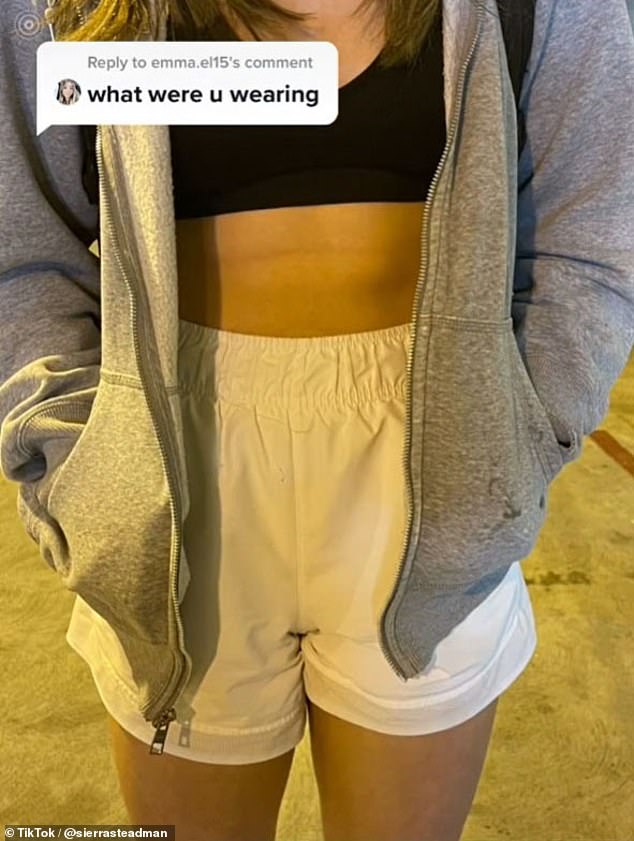 Outfit in question: Steadman said she was wearing a baggie zip-up hoodie, a black crop top, and high-waisted shorts

The footage shows Steadman wearing a mask and the hood of her sweatshirt over her head to hide her tears while in her seat.

‘When the flight attendant [slut] shames you in front of the whole plane and threatens to kick you off you for what [you’re] wearing,’ she captioned the video.

Steadman further elaborated on what happened in the comments, claiming the woman was ‘screaming’ and ‘grabbed my arm’ after she tried to walk away.

Thousands of people commented on the post, with many people encouraging her to report the incident to the airline. 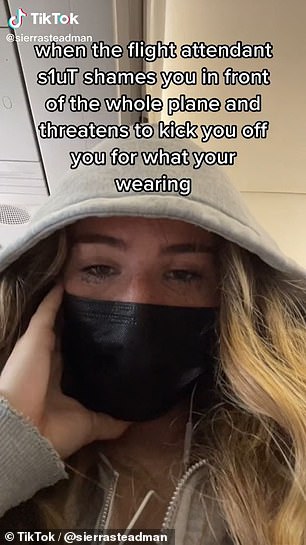 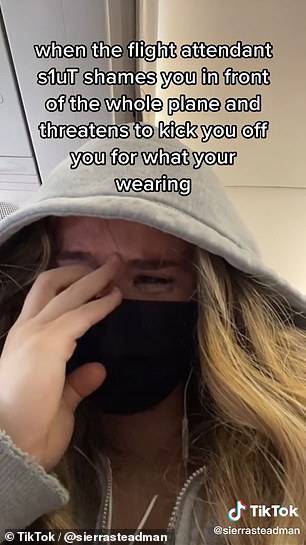 Going viral: Steadman shared more details about the alleged incident in the comments section, where thousands of TikTok users shared their sympathy

Another added: ‘I’m so sorry. You should definitely report what happened.’ Steadman responded to the comment, explaining that she already did.

In a follow-up video, she revealed what she was wearing, sharing a photo of herself in a baggie zip-up hoodie, a black crop top, and high-waisted white athletic shorts she had on for her flight.

‘Outfit appropriation set aside, there was no reason to physically and verbally assault me and humiliate me especially when I complied with her request,’ she wrote in the comments.

Steadman detailed her version of events in another video, claiming the flight attendant stopped her before she got to her seat and told her to zip up her jacket. The teen said she nodded and started to zip it up as she headed to her seat.

‘That should have been the end of that. But instead, she decided to grab my arm and pull me back to her to start yelling at me in front of everybody,’ she alleged. ‘That is where the problem is.’ 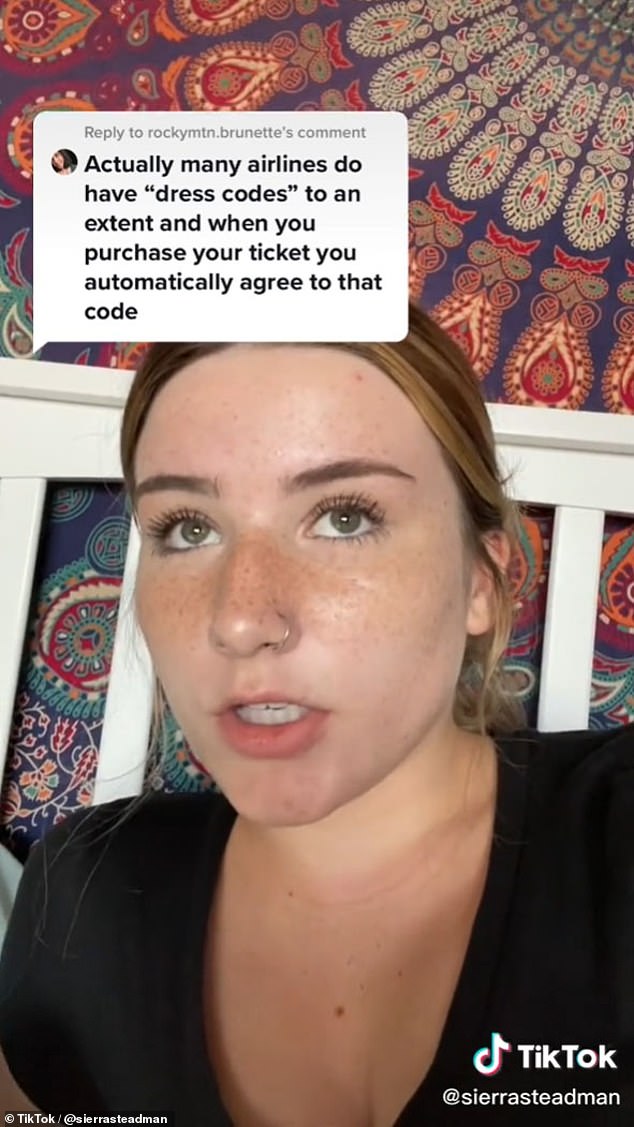 Story time: Steadman detailed her version of events in another clip, claiming the flight attendant ‘grabbed’ her arm and ‘screamed’ at her in front of the entire plane 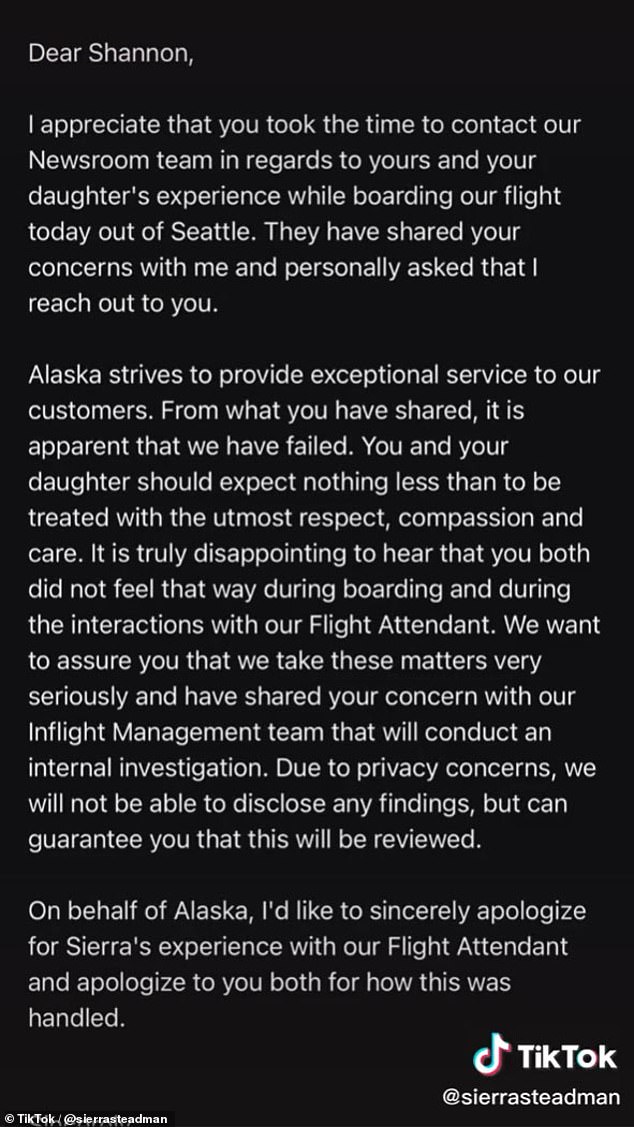 Steadman claimed Alaska Airlines reached out to her mother, Shannon, following their complaint and shared a screenshot of the email

She stressed that she didn’t have any problem with her being asked to zip up her sweatshirt — her issue was how the flight attendant acted after she complied with her request.

‘It’s her plane. She works on the plane. If that is what she wants, then I will zip up my jacket,’ she said. ‘I don’t think there was anything wrong with what I was wearing, but if she wants me to zip up my jacket, I will. But the things that happened after that, especially when she grabbed me, is where this is not OK.’

Steadman claimed Alaska Airlines reached out to her mother, Shannon, following their complaint and shared a screenshot of the email that she allegedly received.

‘Alaska strives to provide exceptional service to our customers. From what you have shared, it is apparent that we have failed,’ the statement read. ‘You and your daughter should expect nothing less than to be treated with the utmost respect, compassion and care. It is truly disappointing to hear that you both did not feel that way during boarding and during interactions with our Flight Attendant.’

The email also said the airline’s inflight management would conduct an internal investigation of the alleged incident.

Hundreds of people commented on the video featuring the alleged response, and many weren’t impressed.

‘That’s all? Wow,’ one person commented. ‘Sounds like “I’m sorry that you FEEL that you deserve an apology even though you don’t” and it’s not it.’

DailyMail.com has reached out to Alaskan Airlines for comment.