Jerrod Baum, 41 (pictured), was arrested for the murders of Riley Powell and Brelynne ‘Breezy’ Otteson on Wednesday

A Utah man tied up two teenagers, stabbed them to death and dumped their bodies in an abandoned mine shaft before they were reported missing nearly three months ago, police said Thursday.

Jerrod W. Baum, 41, was arrested on suspicion of aggravated murder, kidnapping, abuse of a dead body and other charges Wednesday, hours after police recovered the bodies on a shallow ledge inside a deep mine shaft near Eureka, about 75 miles south of Salt Lake City.

Baum killed the two teenagers after they visited his girlfriend at their home, then bound them in their Jeep and drove them to an abandoned mine where he stabbed them to death, the girlfriend told investigators.

He said he’d already warned her about having male friends at the house and ‘it was too bad because he has never killed an innocent before,’ she told authorities, according to police documents. 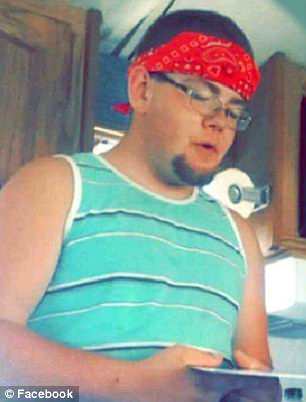 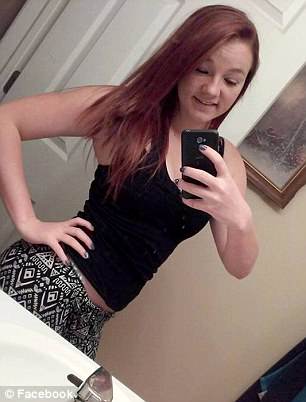 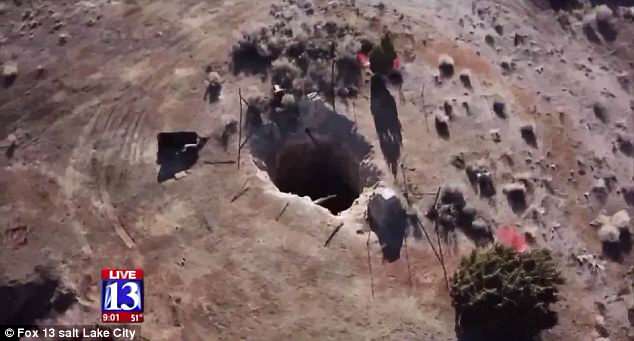 On Tuesday, their bodies were found dumped down this mine, after the killer’s girlfriend confessed to police that he had killed them 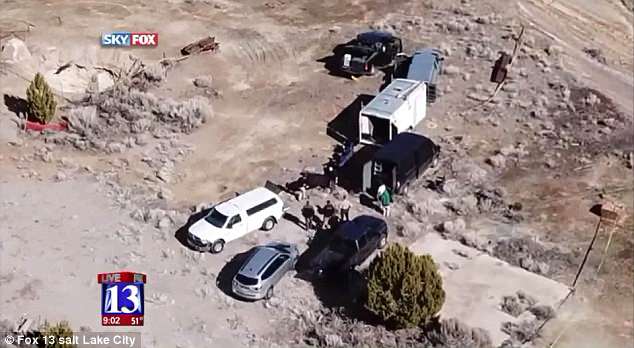 The girlfriend, Morgan Henderson, initially told police in January that the couple had come over to her house before they went missing to smoke weed, but after they left she hadn’t heard from them. Above, the scene of the murders on Wednesday 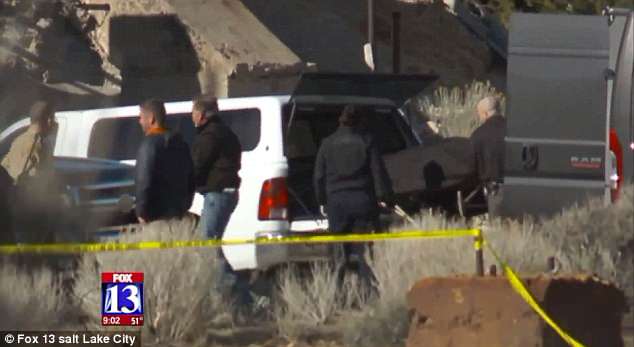 But after police found an axe, a rifle and knives in Henderson’s car in an unrelated traffic stop on Sunday, she talked to investigators again and confessed that her boyfriend had killed the teens. Above, a body being taken from the mine on Wednesday 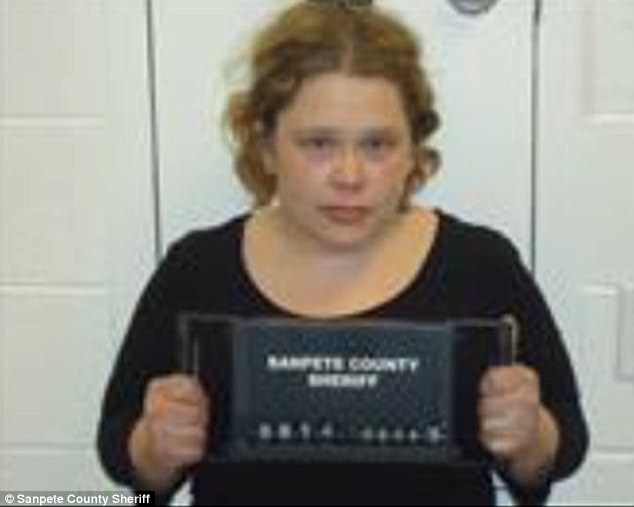 Henderson is pictured above in the mugshot for her Sunday arrest

He told her he’d made Riley Powell, 18, suffer but kept the death of Brelynne ‘Breezy’ Otteson, 17, quick and painless because he felt bad, Utah County Sheriff’s officials wrote.

Powell and Otteson were recovered after police found a Facebook message thread showing the teens planned on going to the couple’s home on December 29, shortly before they were reported missing, according to police documents.

Baum’s girlfriend Morgan Henderson, 34, told police in January that the teens had come over, smoked marijuana with her and left, and that she hadn’t seen them since. But after police found an axe, a rifle and knives in her car in an unrelated traffic stop on Sunday, she talked to investigators again.

She said the couple had come to the house, but after they left Baum came to find her and showed her the teens were tied up in Powell’s Jeep. He put her in the car to ‘go for a ride and have a talk,’ and took them all out to an abandoned mine site. He killed the teenagers, dropped their bodies in the mine shaft, then took her back home and threatened her as well, police said. 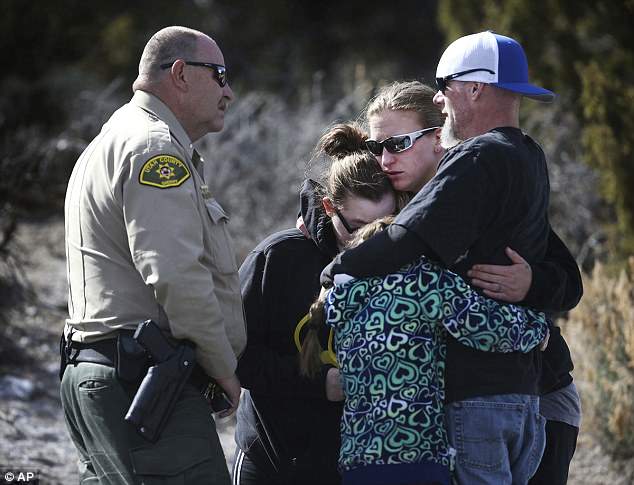 A police officer watches as Breezy’s father, stepmother and two sisters console one another after her body was recovered on Wednesday 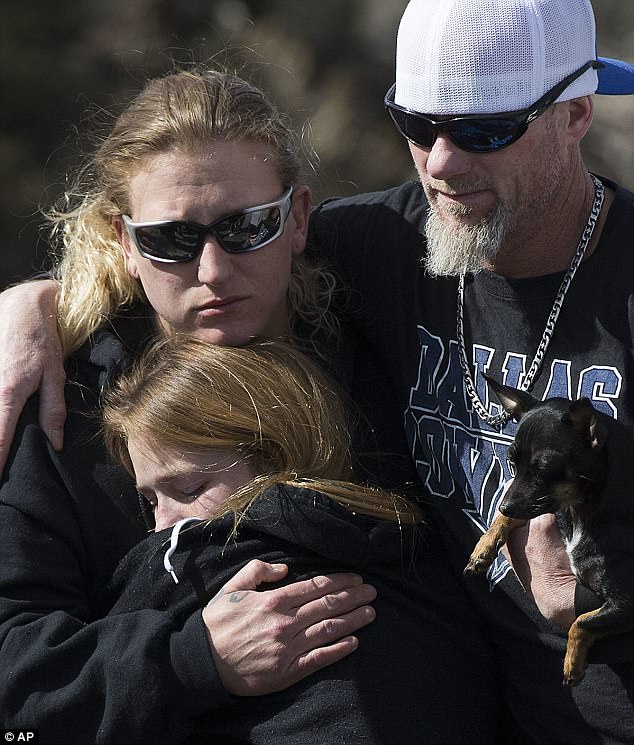 Breezy’s father Kenny Otteson, stepmother Emalee Otteson and sister Anisty Shoemaker console each other after her body was found on Wednesday 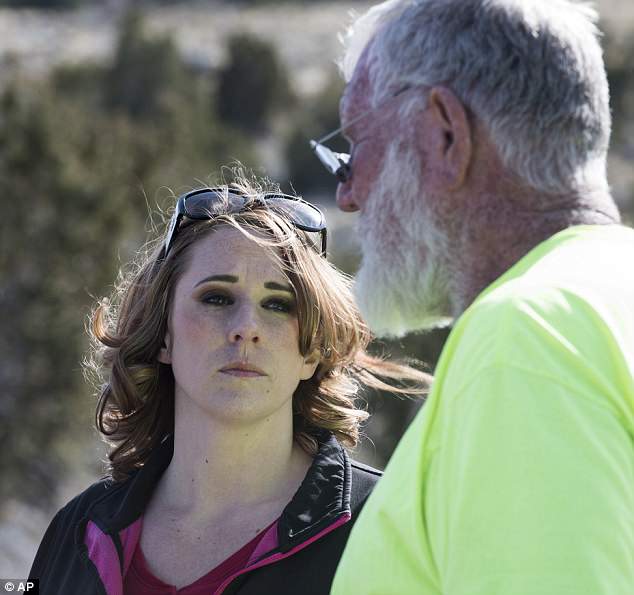 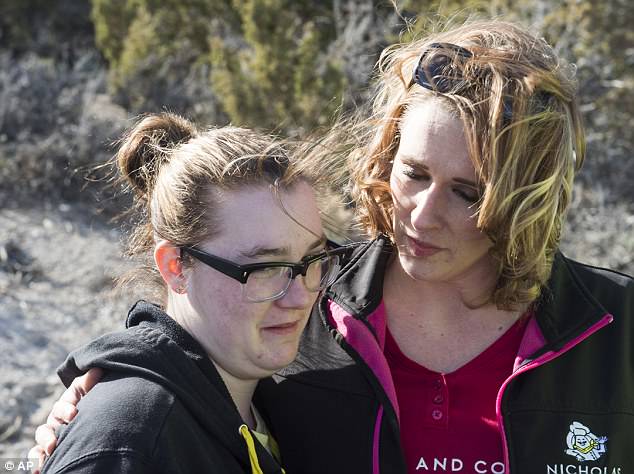 Kylysta, Breezy’s sister, gets a hug from their aunt Amanda Hunt on Wednesday

Henderson dumped the Jeep at a nearby reservoir, she told police. A lawyer listed for her in a previous case did not immediately return a call seeking comment.

Court records show Baum has a rap sheet dating back to the early 1990s including theft, assault and weapons charges. 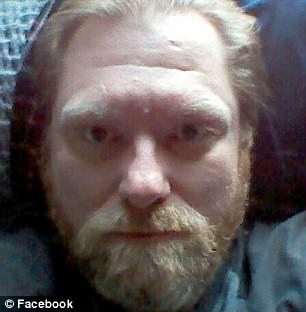 Baum is pictuerd above in a photo from Facebook. His girlfriend says he made Riley suffer

Last year, Baum and Henderson were found in a car near Yuba Lake state park with a tactical knife tucked in the small of his back and another knife on a necklace under his shirt, along with a container of meth, a pistol and prescription drugs, according to court records. He was convicted of weapon and drug charges in that case.

Baum was also accused of helping his girlfriend load and stash a handgun in their home earlier this year. He has not yet entered a plea in that case.

In interview with Fox 13 Salt Lake City on Wednesday, the victims’ family members were torn over the discovery of the bodies.

‘We’ve searched a lot of country, and I mean to find out that they’re this close…’ Bill Powell, Riley’s father, said.

Hunt said that the mine was actually one of the first places they thought to look, but it is on private property so they couldn’t go right away.